The JACC was created because most refugee social service centers are based in Tel Aviv, forcing Jerusalem’s migrant population to leave the capital to receive aid. 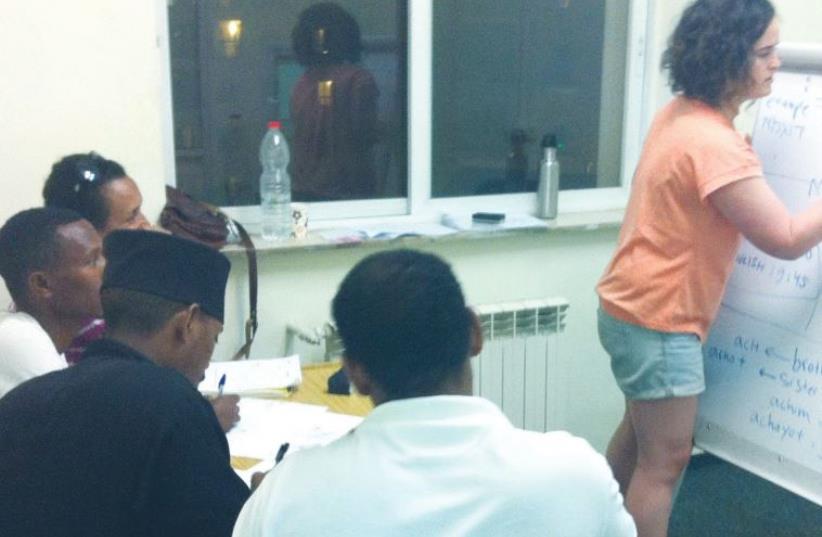 A Hebrew teacher conducts a class for asylum-seekers recently at the Jerusalem African Community Center
(photo credit: Courtesy)
Advertisement
Jerusalem’s first African community center, serving the city’s some 2,000 Eritrean, Sudanese and Ethiopian asylum seekers, opened downtown Thursday night to celebrate Hanukka and International Human Rights Day.Called the Jerusalem African Community Center, the NGO was spearheaded by its board member, Or Mor, who helped register the organization last summer and procured office space in downtown Jerusalem.According to Mor, JACC offers a combination of social, education and legal services, as well as a friendly general gathering place for the men, women and children who fled their violent countries with hopes of receiving political asylum in Israel.“We have an adult education program that provides Hebrew and English lessons every day at the center, a big brother and sister program for children between 6 and 12, and we have social workers who give psycho- social support,” he said.“We also will have a rights advocacy center opening next week, offering assistance in issues related to legal status, workers rights, health and welfare.We try to give assistance in all these fields, but when we can’t we will transfer people to other organizations.”Mor said he created JACC, which has roughly 80 volunteers – primarily professionals and university interns studying social work – because most refugee social service centers are based in Tel Aviv, forcing Jerusalem’s migrant population to leave the capital to receive aid.“What we try to do now is instead of having people go to Tel Aviv for help, we try to give as much assistance as possible in Jerusalem, which makes it easier for the other programs in Tel Aviv,” he said of the center, which has four classrooms and large reception area for gatherings.Presently, Mor said there are more than 50 students registered for Hebrew and English lessons, 18 children enrolled in the big brother and sister program, eight families receiving psycho-social support, and 10 families enrolled in the center’s early childhood development program.While the center officially opened Thursday night, Mor said various NGO's have provided similar services as a grass roots organization in Jerusalem for nearly eight years.“In July of 2014 we decided to build a community center to serve the city’s migrant community,” he said, noting that JACC’s board of directors is comprised of eight members who are African and Israeli.“We believe in cooperation between the African and Israeli communities, especially because of acts of violence against refugees.”Moreover, Mor said he hopes the center will educate Israelis about the harsh realities facing the African refugee community, and debunk false assumptions about them.“I think many people in Jerusalem don’t even know there’s a refugee community living among them, but there are 2,000, and sometimes people may be surprised to learn about them,” he said. “We’ve heard people say that refugees are coming from Tel Aviv to take over Jerusalem, but they have been living here for over six years, and some much longer.”Mor continued: “They just want to live in peace like everyone else; to have a place to live and have asylum. They don’t want to take over Jerusalem, or Israel, or any other place. They just want to live in peace until they can return home.”He added that up to 70 asylum seekers living in Jerusalem were released from the notorious Holot Detention Facility, in the Negev, which opened in December 2013 following passage in the Knesset of the amendment to the Prevention of Infiltration Law.The facility has since been expanded to house a maximum of 3,300 migrants, who are only permitted to leave during the daytime.Last January, more than 10,000 African asylum-seekers gathered in a park adjacent to the Knesset to protest against what they deemed Draconian government detention policies.Most of the 55,000 African migrants in Israel are from Eritrea and Sudan, and could face life-threatening persecution if they return to their countries. However, unless they can obtain increasingly restrictive visas, many will end up in detention centers and could be deported.Meanwhile, the majority of refugees not forced into the detention center face daily challenges, ranging from finding employment, affordable housing, and basic respect among a largely unwelcoming populace.“We’re the only organization that gives direct services and a community center in Jerusalem for empowerment, training and leadership,” he said. “We’re trying to build a community together and hear from the people what they want to do.”For the most part, Mor said, that entails a place where the refugees can meet, celebrate holidays, learn Hebrew, and simply find support.“We are opening on December 10 not only to celebrate Hanukka, but also International Human Rights Day,” he said.“The space is not huge, but it fits our needs,” he added.Still, Jack Adam, a 31-year-old refugee from Darfur, who was released in August from the Holot detention facility, said that the most pressing need for all asylum-seekers is unequivocally legal representation.“I am very grateful for the center, but what is most important is to pursue our legal cases, because we have temporary visas that last for a month, so we live in limbo,” said Adam, a dish washer who lives in a cramped downtown Jerusalem apartment with four other African refugees.Indeed, Adam emphasized that legal representation is a primary issue, while housing and jobs are secondary.“We appreciate the help NGOs and the Jerusalem center provide, but our biggest fear is if we’re sent to Holot again,” he said.