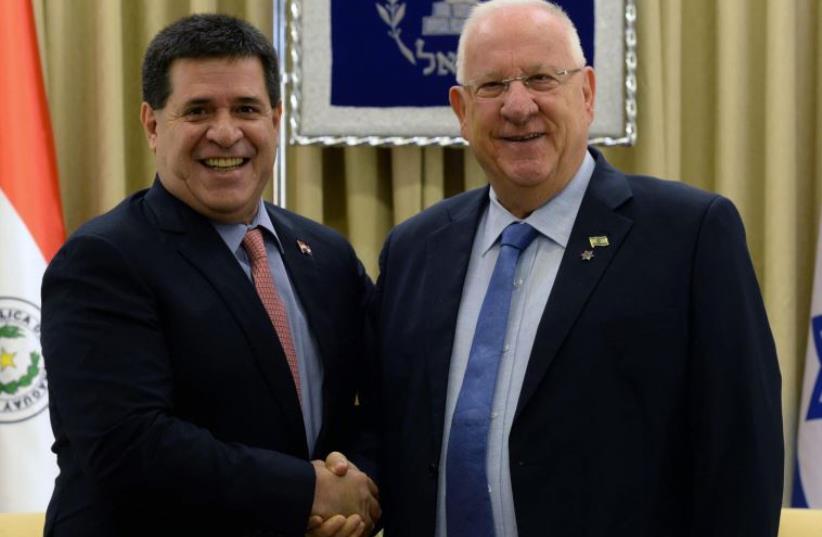 President Rivlin meets with President Cartes of Paraguay on state visit to Israel
(photo credit: Mark Neiman/GPO)
Advertisement
The Friends of Zion Museum hosted Paraguayan President Horacio Cartes on Monday, on the sidelines of his visit to Israel for the opening of Paraguay’s embassy in Jerusalem.During the visit, Dr. Mike Evans, Founder of the Friends of Zion Museum, presented the FOZ Award to President Cartes for his decision to move his country’s embassy to Jerusalem.Cartes visited the Friends of Zion Museum after his meeting earlier in the day with Prime Minister Benjamin Netanyahu and the inauguration of the embassy.FOZ said it presents awards to world leaders who have gone “above and beyond” for Israel. The FOZ Award was commissioned by the Friends of Zion’s first International Chairman and Israel’s ninth President, the late Shimon Peres. Among the recipients of the award is President George W. Bush, Crown Prince Albert II of Monaco, and former president of Bulgaria Rosen Plevneliev. A few months ago, the award was presented to US President Donald Trump and Guatemalan President Jimmy Morales for moving their embassies from Tel Aviv to Jerusalem.The FOZ Museum hosts thousands of South American tourists every year. President Cartes said he was touched by the Friends of Zion’s message of building bridges and connecting the State of Israel and her people.