The names of the former public figures under investigation in connection to corruption are under a gag order. 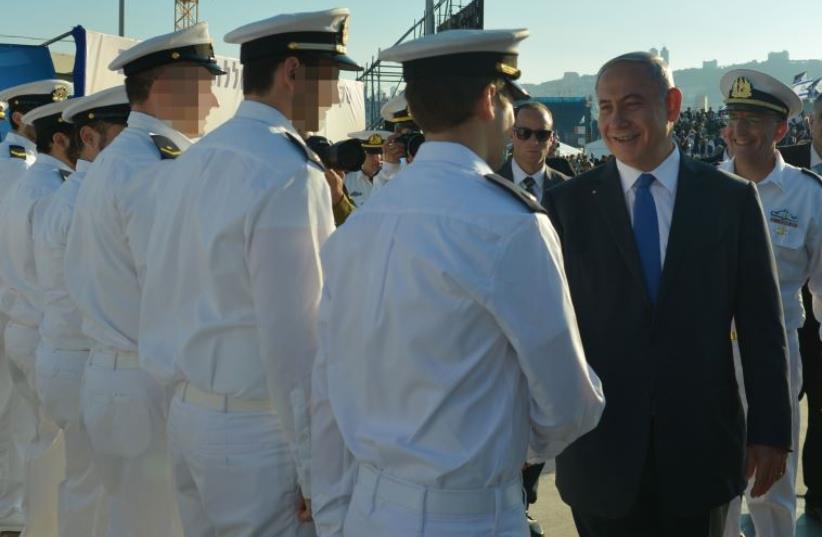 Netanyahu at the INS Rahav submarine arrival ceremony
(photo credit: KOBI GIDEON/GPO)
Advertisement
A former minister, former senior official in the National Security Council and and political adviser of a current minister were questioned on Monday by Lahav 433, the National Crime Unit, as a part of the “submarines affair.” The names of the former public figures are under a gag order.On Sunday Prime Minister Benjamin Netanyahu’s former chief of staff David Sharan was arrested in Case 3000.Sharan is suspected in bribery, fraud, breach of trust and conspiracy to commit a crime. It was reported that the Israel Police extended his arrest in five days.Case 3000 is a police corruption investigation into Israel’s purchase of German-made naval vessels, in which Prime minister Netanyahu is not a suspect.Attorney Eitan Maoz who represents Sharan said that he has a rich record of public service, and that the subject he was questioned on is old.“I do not understand why they keep him detained,” Maoz added, “if he wanted to disrupt the investigation he could of done that a long time ago.”Maoz also stressed that Sharan does not intend to become a state’s witness, neither was he offered a deal. He said that this kind of deal is impossible in light the nature of his questioning.Judge Einat Ron from the Rishon Letzion Magistrate court, who issued the permission to extend the arrest, said that large amount of material has been gathered in Case 3000, and it is in its preliminary stages. She added that because of the nature of this complicated investigation, there are not alternatives to the arresting procedure.Along with Sharan, Natan Mor and Tzachi Lieber, two political strategists were arrested. It was reported that it is suspected that they used to transfer bribe money to state officials.Sharan was questioned over events the took place while he was serving under minister Yuval Steinitz, when he was the Knesset Foreign Affairs and Defense Committee chairman. Also on Sunday, police arrested three more suspects including a former commander of the Israeli Navy's Shayetet 13 commando unit, former OC Navy V.-Adm. (res.) Eliezer Marom and other former high-ranking military officers. Reports stated that this round of police questioning came in light of revelations made in Miki Ganor’s testimony.  Ganor was the Israeli representative of German shipbuilder ThyssenKrupp and became a state’s witness in the "submarine affair” in late July.Ganor’s testimony focuses on deals he conducted with the Defense Ministry, but its details are under a gag order. It was reported that a senior police figure said that Ganor “provides great material” for the investigation.