Cattle ranchers to be paid to shoot Israeli wolves

By HAGAY HACOHEN
MARCH 13, 2018 10:37
Footage of wolves in the desert. (courtesy of DR. HAIM BERGER ,NEGEVJEEP-DESERT AND ANIMAL BEHAVIOUR TOURS, MATAN BOGOMOLSKY-ISRAEL NATURE AND PARKS AUTHORITY via Reuters)
Advertisement
The Ministry of Agriculture recently made public an initiative rewarding Israeli cattle ranchers for killing wolves, provided the shooting was done while preventing the wolves from attacking calves and sheep. The ministry will pay the ranchers NIS 2,000 per adult wolf and NIS 500 per cub if they are able to kill them.   The new policy had been adopted to protect cattle grazing in open spaces. Grazing is supported by the state as it is seen as a promotive measure to preserve open spaces. In a phone interview with The Jerusalem Post, Dr. Amit Dolev, who serves as the Ecologist to north Israel under the Israeli Nature and Parks Authority, explained that "grass is, in reality, a variety of plants who compete with one another." Before humans domesticated grass-eating animals, their wilder forefathers would regulate plant growth. "Domestic cattle imitates the actions of these ancient wild-beasts, and so are important to regulate vegetation," he explained.The shooting of wolves was adopted as policy after an incident in 1998 in which cattle ranchers attempted to protect their herds by leaving dead cattle laced with poison for wolves to find.The wolves were not greatly harmed by this effort, as they largely avoided eating the poison and ate other parts of the dead cattle. Other local predators, such as foxes and hyenas, were not so lucky, and died after eating the poison. Other scavengers, such as vultures, were badly effected. "This led to a collapse of the entire vulture population in the Golan," explained Dolev. 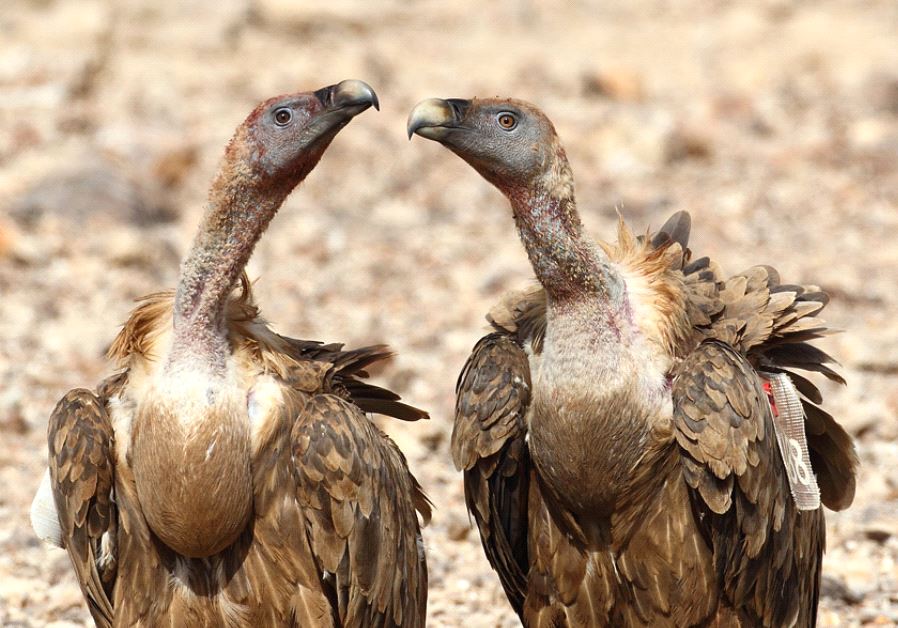 Israeli Vultures / YORAM SHAPIR"We don't know how many wolves currently live in Israel," Dolev said. "In the mid-eighties, wolves were rare, during the 90's and 00's their population grew. And one of the reasons for this is the wide-scale cattle ranching in the area. This created food sources [for the wolves]."    More food means more wolves, and the new wolves needed more food, which led to the ranchers to attempt to poison them.  The new policy, which began after the poisoning incident, allows ranchers to contact the Nature and Parks Authority and get permission to shoot wolves that attempt to kill one of their animals."If they are able to kill the wolf they try to dispose of the body," Dolev explained. "In the Golan Heights, around 300 tons of dead matter are cleared annually.""We are working to reduce the numbers of [animal] bodies to limit the food resources available to wild animals." The efforts seem to be working, as the gazelle population is growing. "Wolves are wild animals," said Dolev. "A wild animal is an animal we all love to watch. We want it to remain wild, but we must not treat it like a house pet. [People should] not approach them and avoid giving them food. This way, we will preserve their ability to breed and exist in nature. And, of course, reduce incidents in which we humans are harmed by wolves."