By TOVAH LAZAROFF
DECEMBER 1, 2014 02:05
Arab construction workers atop a building in the Tekoa settlement.
(photo credit: REUTERS)
Advertisement
West Bank settlement construction dropped sharply, by 62.4 percent in the first three quarters of 2014, even as the international community has increased its verbal attacks against such building that it believes prevents the resumption of the peace process.Data published by the Central Bureau of Statistics on Sunday showed that ground was broken on 935 homes in Judea and Samaria from January to September of this year, compared with 2,487 during the same period in 2013.Settler building makes up only 2.8% of the 32,850 country wide housing starts. But the largest drop in construction occurred in Judea and Samaria, compared to an overall decline of 7.4%, according to the CBS. 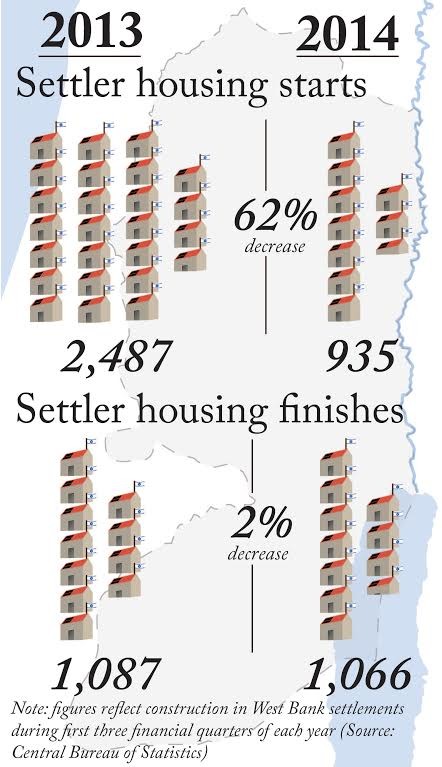 Housing starts in Jerusalem, in comparison, grew by 20.6% in the first three quarters of this year, compared with last year. But the CBS does not provide data that shows how much occurred over the pre-1967 lines in Jerusalem.The Council of Jewish Communities of Judea and Samaria blamed the drop on what they believe is a pending freeze in settlement construction as well as the rising costs of apartment buildings.“This comes from a freeze in tenders,” said deputy council head Yigal Dilmoni.The council, he said, has been battling this pending halt in building in Judea and Samaria.It is concerned because since the summer no tenders have been issued for West Bank settlements and the Higher Planning Council for Judea and Samaria has not advanced any plans that include new homes.Peace Now, however, dismissed the notion of a settlement freeze.“I can tell you that there is a lot of construction going on in the settlements,” said Lior Amihai of the nongovernmental organization.The number of starts has dropped, because there was an extraordinary amount of new building in 2013, said Amihai.“It was out of proportion to past years,” he added.He said more housing tenders were published in 2014 than in any other year since 2003.According to the CBS, the 2,684 housing starts in West Bank settlements in 2013, was the largest such number in 12 years. The bulk occurred in the first three quarters of the year.In contrast, there were 1,205 housing starts in 2012, 1,109 in 2011, 738 in 2010 and 1,963 in 2009.When it came to the number of settler homes that were completed in the first three quarters of 2014, there was only a decline of 1.9% from 1,087 units to 1,066 in that same time period in 2013.Similarly there was a 1.9% drop in the number of finished homes country wide, although Jerusalem registered a 14% increase.Construction Minister Uri Ariel promised more homes would be built in 2015, and the rise in new building would already be evident in the last quarter of 2014. But he did not specifically address the issue of Judea and Samaria.The Palestinians and the international community have pressured Israel to stop all building in West Bank settlements and areas of Jerusalem over the pre-1967 lines. But Israel has refused to heed that request.
Advertisement
Subscribe for our daily newsletter