From Tel Aviv to Hollywood, celebrities mourn the loss of Shimon Peres 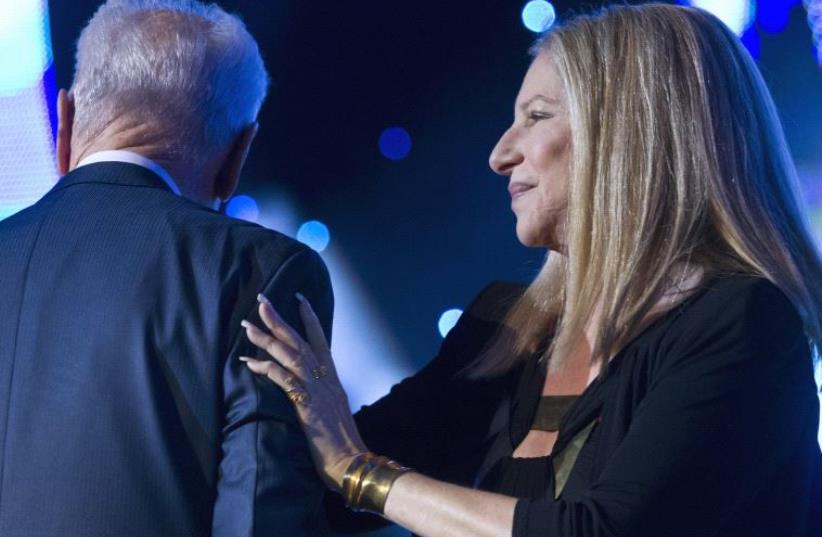 Shimon Peres with US singer Barbara Streisand after she sang at two songs durings Peres' 90th birthday celebration in 2013.
(photo credit: REUTERS)
Advertisement
As the world reacted to the death of Shimon Peres on Wednesday, celebrities from Tel Aviv to Hollywood paid tribute to him.American singer Barbra Streisand shared her memories of Peres on Instagram and Twitter, calling him “a voice of reason.”“President Shimon Peres was a voice of reason who also happened to have the sensibility of a poet... thoughtful and soft-spoken, but his words echoed loudly around the world,” she wrote.“His mind was expansive and his heart was compassionate,” the Jewish film star said. “He was a brilliant statesman, gifted with the ability to listen to others who did not share his views and still remained determined to find a path forward.”

President Shimon Peres was a voice of reason who also happened to have the sensibility of a poet…thoughtful and soft-spoken, but his words echoed loudly around the world. His mind was expansive and his heart was compassionate. He was a brilliant statesman, gifted with the ability to listen to others who did not share his views and still remained determined to find a path forward. Photo: Yosef Avi Yair Engel
A photo posted by Barbra Streisand (@barbrastreisand) on Sep 27, 2016 at 10:15pm PDT


World-famous singer and actress Madonna also took to social media to pay homage to Peres, whom she called "a remarkable human being." The kabbalah practitioner praised Peres's peace work, calling him a symbol of peace for Israel and the whole world. "And Guess what else I Love Palestinians," she added.

In Memory of this remarkable Human Being, Shimon Peres. You were a symbol of Peace not only for Israel but for the...https://t.co/biBiOd14xN pic.twitter.com/M1LdV8Oq2p
— Madonna (@Madonna) September 28, 2016

Shimon Peres' warmth &kindness moves my heart to this day. To his family I send my most heartfelt condolences. My heart aches for you all.
— Paula Abdul (@PaulaAbdul) September 28, 2016


Israeli supermodel Bar Refaeli's mother, Tzipi, posted an undated photograph from years past to Instagram of her family members alongside Peres.


Former Miss Israel, Tahounia Rubel, remembered Peres, posting a video with him and writing "Thank you for who you were."