This year has been designated Agnon year, marking 50 years since Shmuel Yosef Agnon became the first Israeli to win a Nobel Prize. 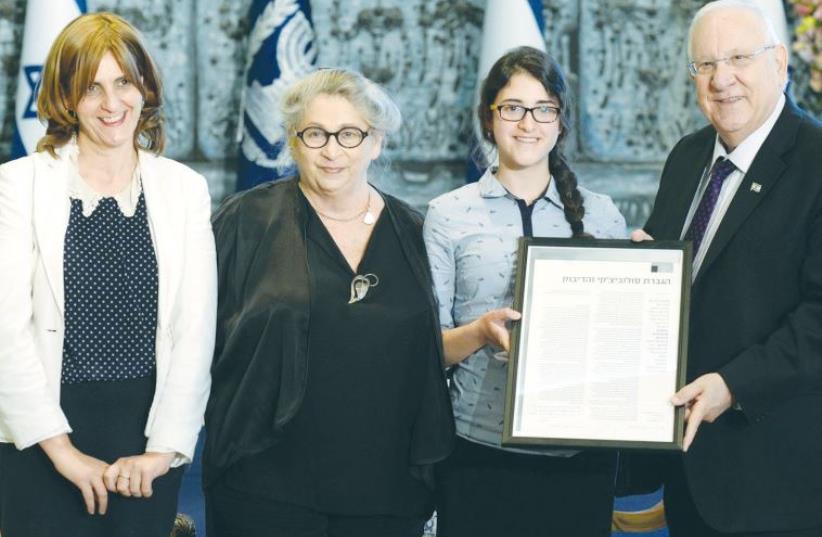 PRESIDENT REUVEN RIVLIN and his wife, Nechama, present a certificate of recognition yesterday to Yisca Shaki, who won first prize in a writing competition for a story she wrote inspired by Shai Agnon, as Shaki’s mother looks on
(photo credit: MARK NEYMAN / GPO)
Advertisement
This year has been designated Agnon year, marking 50 years since Shmuel Yosef Agnon became the first Israeli to win a Nobel Prize.A ceremony launching the yearlong event took place on Sunday at the President’s Residence in the presence of members of Agnon’s family, with writers, literary scholars, lecturers and critics.The declaration was the initiative of the administrators of Agnon House, in light of the honor that Agnon brought to the young State of Israel.Agnon House, located in the author’s former residence in Jerusalem’s Arnona neighborhood, is a cultural and educational institution dedicated to commemorating the writer’s life story and contribution to Hebrew culture.For more than half century prior to receiving the award, Agnon had dreamed of being in the pantheon of world literary figures, and there is evidence of this in his writings.A range of distinguished individuals and organizations recommended Agnon to the Nobel Committee over the years, according to Prof. Dan Laor, who teaches Hebrew Literature at Tel Aviv University.Agnon’s eventual triumph was not only a matter of personal glory, said Laor, but also a political victory for Israel, in that Hebrew literature was no longer regarded as a parochial vehicle for purely local consumption, but became recognized worldwide.News of Agnon’s award was leaked from Sweden prior to the official announcement, and the whole of Israel was euphoric, said Laor, noting that the prize was a breakthrough for many other Israeli writers to be published and read abroad.President Reuven Rivlin’s father had been friendly with Agnon, and they had been frequent guests in each other’s homes. At the ceremony Sunday, Rivlin remarked that he, a seventh generation Jerusalemite, was a Jerusalemite by fate, whereas Agnon was a Jerusalemite by choice. In his address at the Nobel Prize awards ceremony, Agnon related to this, declaring that although he had been born in the Diaspora, in a way, it always seemed to him that he had been born in Jerusalem.Agnon will always have a place in the hearts of Jerusalemites said Rivlin, because Jerusalemites love stories, especially stories about Jerusalem and Jerusalemites – and Agnon’s writing abounds with that.One purpose of the gathering was to determine how relevant Agnon’s writing is today. Various contemporary writers read excerpts from his works, and indicated that Agnon is perhaps even more relevant today than he was 50 years ago and more, because he conveys all of Jewish history, in the full gamut of emotions, suffering, challenges and the ability to overcome.The consensus of the participants was that Agnon was a master of the written word with an enviable ability to turn words into pictures in the mind of the reader.Agnon received the Nobel Prize for Literature. Of Israel’s other 11 awardees, Menachem Begin, Yitzhak Rabin and Shimon Peres received the Nobel Peace Prize. Daniel Kahneman and Robert Aumann were Economics laureates, while Avram Hershko, Aaron Ciechanover, Ada Yonath, Daniel Shechtman, Michael Levitt and Arieh Warshel each received the Nobel Prize for Chemistry.Despite the fact that Israel has many excellent writers whose works have been translated into many languages, Agnon remains the most prominent literary giant of all – if the Nobel Prize is the criterion.