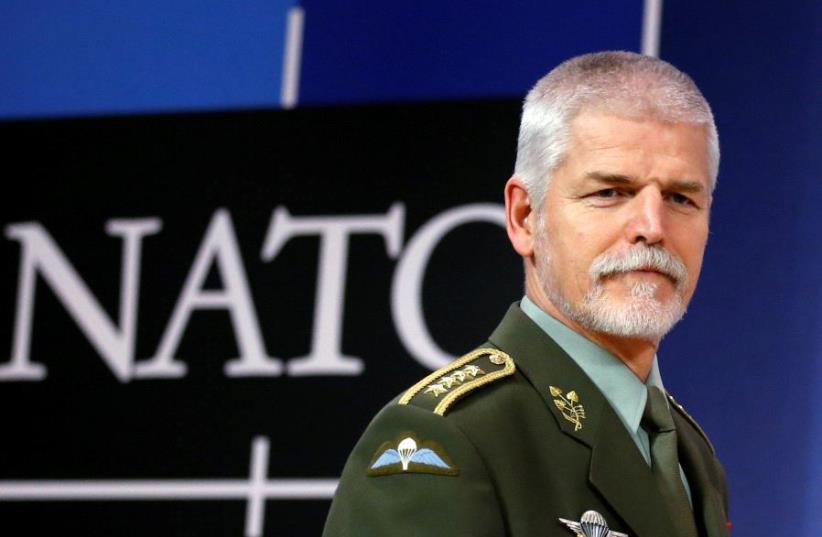 Chairman of the NATO Military Committee Pavel
(photo credit: REUTERS)
Advertisement
Gen. Peter Pavel, chairman of NATO’s Military Committee, arrived in Israel on Wednesday to discuss common challenges and regional developments with IDF Maj.-Gen. Yair Golan.The visit aims to highlight the existing cooperation and to strengthen the relationship between Israel and NATO, according to the IDF.During his visit, Pavel will visit several bases around the country and meet with Chief of Staff Lt.-Gen. Gadi Eizenkot, OC Military Intelligence Maj.-Gen. Herzl Halevi, and Operations chief Maj.- Gen. Nitzan Alon.Israel has been a member of NATO’s Middle East Dialogue since 1994, and in January Roni Leshno Yaar, the first Israeli representative to the organization, submitted his credentials to NATO Secretary-General Jens Stoltenberg when Israel opened its office there.As part of the collaboration there is an ongoing dialogue among the military branches and agencies and other organizations under NATO, with IDF representatives participating in training exercises, such as a January 2016 field exercise in Montenegro.After the breakdown of ties with Turkey six years ago, Ankara exerted efforts to isolate Jerusalem from military cooperation with NATO.But following the reconciliation deal, Ankara withdrew its longstanding veto against Jerusalem being accepted as a partner nation to the organization, not a member.His visit comes as the head of the US Army’s European Command, Gen. Curtis Scaparrotti, is also in Israel.On Tuesday, Scaparrotti toured the Arrow missile interception system at Palmahim Air Force Base south of Rishon Lezion as well as a captured Hamas tunnel. Scaparrotti also serves as supreme allied commander of NATO in Europe.Defense Minister Avigdor Liberman is currently in Washington meeting with several senior US officials in the Trump administration, including his US counterpart, Gen. James Mattis.