Report: Sara Netanyahu to be indicted within 10 days

The Justice Ministry has been adamantly denying most reports related to content or timing of possible charges against the Netanyahus, but this time the ministry refused to confirm or deny the report. 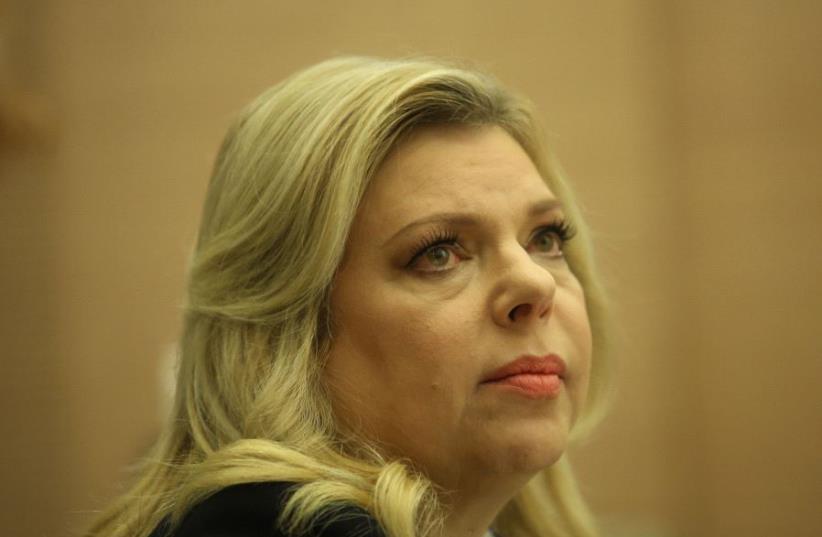 Sara Netanyahu
(photo credit: MARC ISRAEL SELLEM)
Advertisement
Sara Netanyahu will be indicted on a range of corruption charges within 10 days, Channel 2 reported on Friday night.Seemingly in response to the Friday report, Netanyahu on Saturday released the results of a privately commissioned polygraph test that purportedly indicated she has been telling the truth in her denial of one of the allegations against her – regarding alleged misuse of state funds for food and hosting events.The polygraph test also supposedly affirmed that she had rebuked Meni Naftali, one of the state’s key witnesses against her, for himself overspending when he was house manager of the Prime Minister’s Residence.While the Justice Ministry has been adamantly denying most reports related to content or timing of possible charges against the Netanyahus, this time the ministry refused to confirm or deny the report about whether Sara Netanyahu would be indicted within 10 days.There were also indications that whether the indictment is filed in 10 days or beyond that time frame, a decision is near.The accuracy of private polygraphs is hotly disputed, and there were no indications that the test addressed a range of other allegations against Sara Netanyahu.Already on August 23, Attorney-General Avichai Mandelblit’s office told the High Court of Justice that he will decide Sara Netanyahu’s fate in the various criminal cases against her in the very near future. Recent reports have also indicated that Mandelblit was leaning toward indicting her.In May 2016, the police recommended indicting Sara Netanyahu on fraud and breach of trust charges related to using public funds for buying food, paying special chefs, related costs for hosting private events and transferring publicly paid for furniture to a private residence.After Prime Minister Benjamin Netanyahu lashed out at Naftali in a speech to Likud activists on Wednesday, Naftali, in a radio interview on Thursday, promised to respond to the prime minister’s attacks at Saturday night’s weekly rally against him in Petah Tikva, but he ended up not even addressing the crowd. Naftali on Saturday night used his Twitter account to challenge the prime minister to a debate.Naftali was among the leaders of hundreds of Israelis who attended the demonstration demanding that Mandelblit indict the prime minister. Protesters gathered in the town’s central Goren Square near Mandelblit’s home, whom they accused of stonewalling in his graft investigations of the premier.“I started coming because I think Netanyahu is corrupt and I think Mandelblit is complicit,” said protest organizer A.B. Binyamin, shouting over the din of chanters.The weekly protest has been held for more than nine months now. Last week, the High Court of Justice ruled that the rallies could continue, albeit with a 500-person limit. The court ruling came in response to a petition from a Petah Tikva resident who sought to bar the protests for disturbing the peace.Protest organizer Eldad Yaniv told The Jerusalem Post that the police had tried to block him yet again from driving to the rally, after the same thing occurred last week.Nahum Cohen, a local resident, said: “I’ve been here every week for four months now and I know we will not overthrow the Likud party,” adding that he didn’t want a change in government but rather, an end to elected officials’ corruption.Tagging along was his nine-year-old daughter who held a sign that read: “If it talks like a duck and walks like a duck, it’s a corrupted duck.”Cohen’s neighbors are bitterly divided on the issue, with some finding the protests intrusive and others sympathetic to the battle against political corruption.A few drivers sped by shouting, “Only Bibi,” employing the prime minister’s nickname in a statement of support.Demonstrators hoisted Israeli flags and submarine-shaped posters – in reference to the corruption probe over the state’s purchase of such vessels. They chanted “the people demand social justice” and, “Bibi, out, out.”One protester clad in a T-shirt with an anti-corruption passage from the Bible tied the scandals to the overall geopolitical situation.“I think the occupation is the source of all corruption in Israel,” said Michael Selay as he hoisted a sign saying that military control over the West Bank is corrupting Israel. “Many people here agree with me, but won’t say it.”Also on Saturday night, dozens of right-wing activists and south Tel Aviv residents gathered outside the home of Supreme Court President Miriam Naor in Jerusalem, to protest “the dictatorship of the Supreme Court.”Holding signs reading “Save Israel from the New [Israel] Fund” and “Justice for south Tel Aviv,” they expressed for the second consecutive week their dissatisfaction with relations between the judicial, legislative and executive branches, and with the Supreme Court’s rulings regarding the African asylum-seekers in south Tel Aviv.During the rally the protesters chanted: “The Knesset legislates, Miriam Naor erases [it rhymes in Hebrew],” and, “The Supreme Court endangers the country.”Last Thursday a golden statue of Naor was placed in front of the court in Jerusalem and later removed by the municipality.The statue was erected by the right-wing Derech Chaim organization, based in the settlement of Yitzhar, which promotes legislation that is in accordance with Jewish religious teachings. The NGO is known for advancing legislation and actions to undermine the authority of the Supreme Court.