“‘The nations came and desecrated your sanctuary’,” said Yosef, citing a verse from the Book Psalms. 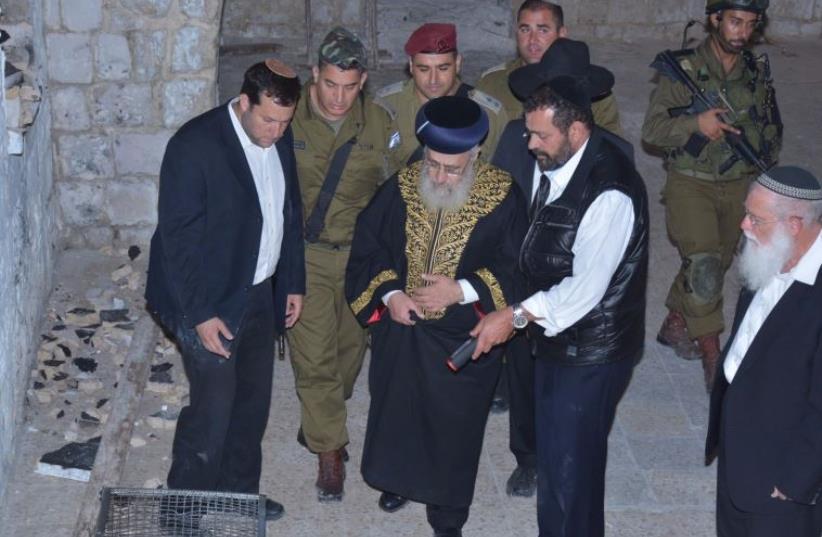 Chief Rabbi Yosef Yitzhak visits desecrated Joseph's Tomb
(photo credit: MEIR BRACHIA)
Advertisement
Sephardi Chief Rabbi Yitzhak Yosef and a delegation from the Shomron Regional Council visited Joseph’s Tomb in the West Bank city of Nablus late Sunday night to inspect the compound, after it was severely damaged by Palestinian rioters who set fire to the site on Friday.“‘The nations came and desecrated your sanctuary’,” said Yosef, citing a verse from Psalms.“What was done here was quite simply the work of ISIS,” he continued. “The heart cannot grasp the evil. What kind of people destroy a holy site in this way? We Jewish people protect their holy sites, their mosques, and they, without shame, treat this holy site [Joseph’s Tomb] in this manner.”Rabbi Elyakim Levanon, the chief rabbi of Judea and Samaria, called on the state to establish Israeli sovereignty over the site.“There is no reason we should rely on the Palestinian police force to protect this place,” said Levanon, a hardline leader of the conservative sector of the national-religious community.“It is the responsibility of the Jewish people to protect this holy place and it is in the hands of the Israeli government.”The recent attack on the site was harshly condemned by Israeli ministers. UN Secretary- General Ban Ki-moon described the incident as “reprehensible.”Palestinian Authority President Mahmoud Abbas’s criticism of the arson attack was his only condemnation of Palestinian violence against Israel in the last few weeks.The Book of Joshua records that the biblical figure Joseph was buried in the city of Shechem, close to present day Nablus. The tomb is believed to be his final resting place, although there is an archeological debate on the issue.Historically the site has been revered by Jews, Christians, and Muslims. In the last 15 years, however, the site has been repeatedly targeted by Palestinian rioters and vandals.In the 1990s, under the Oslo Accords, Jewish worshipers had regular access to the site and a yeshiva was located there.In October 2000 at the beginning of the second intifada, Palestinian rioters entered the site and set fire to it, gutting the place and burning the prayer books and furniture at the tomb. The dome of the tomb was subsequently painted green in an apparent attempt to Islamicize the site, although the paint was subsequently removed.Since then the site, which is fully under the control of the Palestinian Authority, has been off-limits to regular Jewish worship, save for once a month when Israelis are allowed to enter under IDF protection. Joseph’s Tomb was restored and re-dedicated in February 2011.Tovah Lazaroff contributed to this report.