The Sephardi Chief Rabbi said instituting the death penalty offered "no gain" for the Israeli public, only offering potential danger for world Jewry. 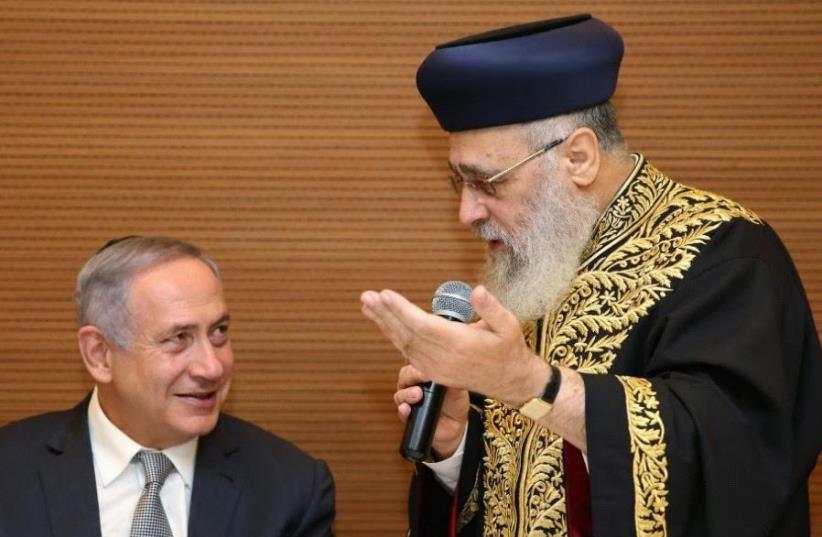 Prime Minister Benjamin Netanyahu (L) and Chief Rabbi Yitzhak Yosef
(photo credit: YAAKOV COHEN)
Advertisement
Rabbi Yitzhak Yosef, the Sephardi Chief Rabbi of Israel, spoke out against the proposed death-penalty legislation during a weekly lecture Saturday night, Channel 2 reported early Sunday morning. "There is no gain," the rabbi said during the question-and-answer section of a weekly lecture. "We are not the Sanhedrin [an assembly forming a Jewish court during biblical times]. If there was a situation of a Jewish terrorist, killing them would be against Halakha. This has nothing to do with the right and the left, it has to do with judgment."The Knesset approved a bill that would facilitate a military court's ability to sentence terrorists to death by a 52-49 vote last week. The bill, sponsored by Yisrael Beytenu and backed by Defense Minister Avigdor Liberman, enjoys the backing of Prime Minister Benjamin Netanyahu, who called the death penalty "justice in extreme situations."He cited an explanation of security officials that the death penalty does not offer much "benefit," reiterating his opposition had nothing to do with political inclinations, and feared the potential repercussions of instituting the death penalty. "Let's say there was a terrorist... who was sentenced to death," he posited. "Until the verdict was carried out, there would be a great uproar in the world and Jews across the world would be in danger so there is no benefit."Yosef, the son of Rabbi Ovadia Yosef, explained, "only the Sanhedrin can issue a death sentencing."The European Union was quick to denounce the move, saying it is "opposed to the death penalty under all circumstances" on Thursday.The bill has proved to be a rift between Liberman's Yisrael Beytenu and United Torah Judaism, as UTJ refused to support the death-penalty bill without it being approved by rabbinical authorities while Yisrael Beytenu refuses to support a UTJ bill that seeks to curb mini-markets operations on Shabbat. Israel has twice carried out executions, first in 1948 when Meir Tobianski was subjected to a drumhead court martial and found guilty of espionage, a false claim for which he was posthumously exonerated. The second, more infamous, occurrence came after the Knesset voted by-and-large to abolish the death penalty when Adolf Eichmann was hanged for Nazi war crimes. Yisrael Beytenu introduced similar legislation in 2015 that was overwhelmingly rejected 94-6 at the time. All six votes in favor came from the six Yisrael Beytenu members of Knesset at the time."You want to sentence someone to death? Only by the hands of heaven. We are not a Sanhedrin [court]," Yosef concluded.Lahav Harkov and Reuters contributed to this report.