Church heads against Israeli 'racist bill that will harm Christians'

"When the entire Christians world is preparing for Christmas, the State of Israel cynically and purposely decided to raise a racist bill that will selectively harm Christians in Israel." 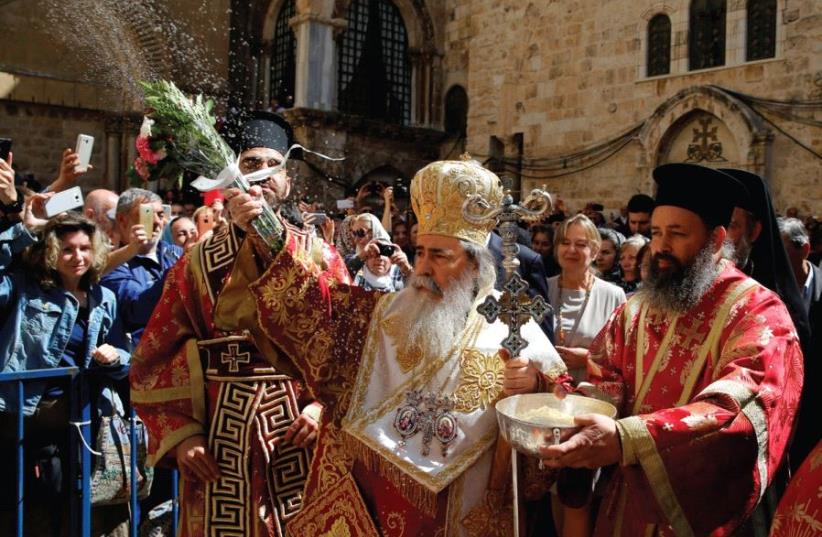 The Greek Orthodox Patriarch of Jerusalem, Metropolitan Theophilos (center), blesses the crowd during the Washing of the Feet ceremony outside the Church of the Holy Sepulcher in Jerusalem’s Old City, April 28, ahead of Orthodox Easter
(photo credit: REUTERS)
Advertisement
The heads of the major churches in Israel have canceled an emergency meeting that was set for Sunday morning to protest a bill that was set to come to a vote that day in the Ministerial Committee on Legislation.
The bill aims to safeguard the rights of residents who live on properties assigned to private entrepreneurs through long-term leases and sales. If passed into law, the church leaders said they believe the bill will harm churches that own vast amounts of such land.But President Reuven Rivlin intervened on Saturday night at the request of the church leaders and the vote was postponed.“When the entire Christian world is preparing for Christmas, the State of Israel cynically and purposely decided to raise a racist bill that will selectively harm Christians in Israel,” the heads of the churches said in a joint statement.The church leaders said the bill would violate a commitment by Prime Minister Benjamin Netanyahu to maintain the decades-old status quo in relations between the churches and the state.“There is no way to explain such a cynical and closed-minded move to advance a racist bill when hundreds of millions of believers in the Christian religion are filling their souls with emotion, faith, hope, peace and love for people of all religions,” the church leaders said.The protest would have taken place at the Notre Dame church, across from Jerusalem’s Old City. The church leaders who were to participate included the Greek Orthodox Patriarch, the Latin Patriarchs apostolic director, the Armenian Patriarch, Maronite Patriarch and the Coptic Archbishop.The bill, proposed by Kulanu MK Rachel Azaria, aims to nationalize properties used for housing that were owned by the church and sold to private developers. It was set for a vote last month but was postponed due to pressure from the church leaders.
Azaria has said church leaders have misinterpreted the bill, which she said is intended to protect residents living in buildings built on church-leased lands.A bipartisan group of US lawmakers, including a top democratic senator and seven congressmen, sent a letter last month to US Secretary of State Mike Pompeo protesting Israel’s advancement of the bill.In February, the crisis over the bill, among other issues, peaked with a rare three-day closure of the Church of the Holy Sepulchre.