Security forces clash with activists during evacuation of settler homes in the Tapuach West outpost in the West Bank, June 17th, 2018. (Credit: Ehud Amiton/TPS)
Advertisement
Eleven officers and five teenage activists were lightly injured on Sunday during hours of clashes over the evacuation and demolition of 10 structures in the Tapuach West outpost in Samaria.On Friday, dozens of teenagers had already made their way onto the small hilltop community located just outside the Tapuach settlement.More arrived on Saturday night. They hiked up the hill, thereby skirting security forces who closed the road to the outpost.Security forces surprised the small community of less than a dozen families by arriving Saturday night, rather than on Sunday morning.“It was a tactical decision,” said outpost resident Moshe Herzlich, who immediately posted their arrival on Facebook live.In the initial flush, most journalists were not allowed onto the hilltop, so residents broadcast the security forces’ actions on social media platforms.“They ran around here for hours looking for people,” said Herzlich, who hosted dozens of teens on the floor of his house. His home was not slated for removal, but could be taken down at a later date.Video showed officers removing – and in some cases shoving – youths who wriggled as they resisted being moved. In one video an officer can be seen punching an activist as he and another office held the young man against a bus.A number of photos were circulated of one teenager who had a gash on the back of his head.Police spokesman Micky Rosenfeld said objects, including cleaning fluid, were thrown at the officers. Six of the activists were arrested for violence against officers."They [the activists] threw what they could find," Herzlich said.But the police treated people brutally, Herzlich charged and at one point, even pushed his wife, who is pregnant.Once officers understood he was harboring protestors in his home, they surrounded it. Herzlich feared they would break in, take apart the windows and door.He worked out a deal with the police in the morning that allowed the teens to leave his home on their own. However, after they left, they sat on the lawn and refused to move, so that officers dragged them away. They were then put on buses and driven off the hilltop.Outpost resident Keren Perlman said that she and her family didn’t sleep all night because of the commotion.Families had lived in five of the structures slated for demolition. By afternoon, the activists had been cleared from the hilltop, which resembled a large construction site. In some cases, cranes demolished the structures while workers took apart other buildings.Herzlich went out to film the demolition. Pointing to a pile of rubble, he said: “That was the first home here.”Security forces entered the outpost to execute a High Court of Justice ruling that some 17 structures be demolished because they were illegally built on land whose status is unknown. 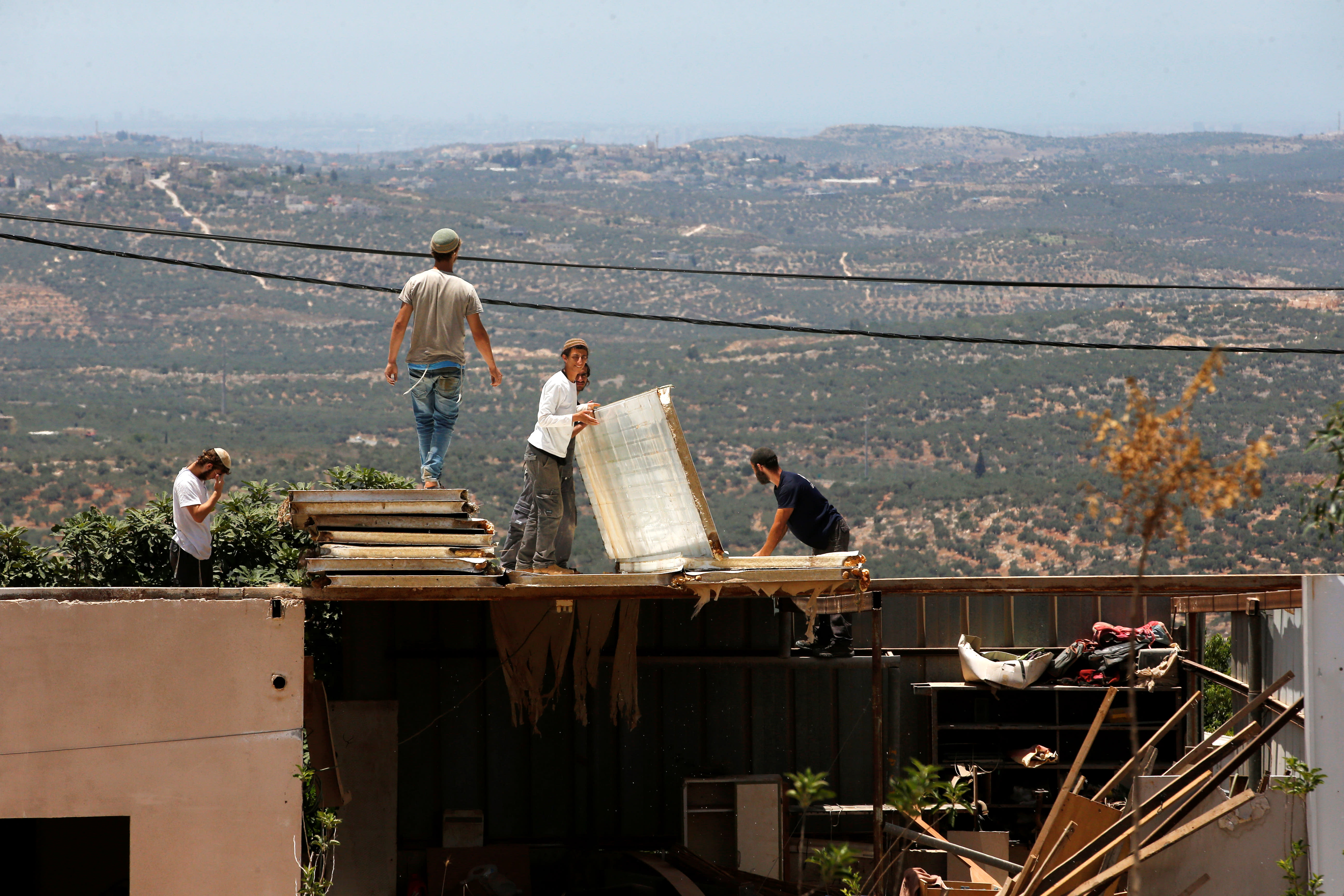 Jewish settlers dismantle parts of a structure during the eviction of buildings that an Israeli court deemed to have been built illegally in Tapuach West settlement, in the Israeli occupied West Bank, June 17, 2018.The left-wing group Yesh Din had filed a petition with the court against the existence of the settlers’ homes, believing Palestinians who claim ownership of the land.The state is looking to authorize those portions of the outpost that are on state land as a new neighborhood of the Tapuah settlement.Yesh Din said in response that the Tapuah West outpost was built with disregard to the law and for many years has been a center for continuous harm to Palestinians living nearby.“The state must insure that this is not a bluff evacuation and that the illegal structures won’t be rebuilt,” Yesh Din said.The demolition comes less than a week after security forces demolished 15 permanent homes in the Netiv Ha’avot outpost in the Gush Etzion region of the West Bank. That demolition drew much more attention because the number of evacuated families was larger and the homes were of more permanent construction.But for the families on the hilltop who have lived there for almost two decades, the emotions were the same.“This is a needless destruction, carried out just because the homes were a few meters from state land,” said Haim Perlman, whose home was not included in the court’s ruling. “The land of Israel belongs to the people of Israel and it is shameful to remove them from their land.”