The army said that it “joined in the sorrow of the family and will continue to support it in the future.” 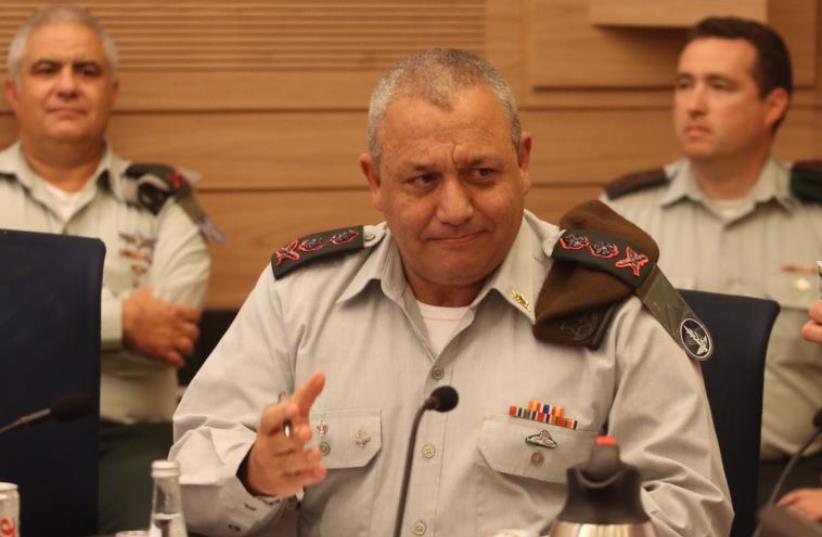 IDF chief of staff Lt.-Gen. Gadi Eisenkot appears at a hearing of the Knesset Foreign Affairs and Defense Committee
(photo credit: MARC ISRAEL SELLEM)
Advertisement
Three commanders of IDF Cpl. Ilan Yankelevich, who drowned in a reservoir in the South on July 27, will be dismissed from their posts, with possible criminal negligence charges to follow, the IDF announced Tuesday.After Yankelevich’s death and the near deaths of two others, all from the IDF’s intelligence branch, who were swimming with him in a reservoir in which swimming was prohibited, the IDF immediately launched an investigation led by IDF Intelligence head Maj. Gen. Herzi Halevy.IDF Chief-of-Staff Lt. Gen. Gadi Eisenkot accepted the conclusions of the investigation, setting the dismissals in motion for a major and two second-lieutenants with both second-lieutenants also potentially on the block for being dishonorably discharged.All three could separately face criminal negligence charges as to whether they failed to properly train and warn the soldiers of the dangers of the reservoir pending their hike, but that will be decided at a  later date by the Military Advocate General’s Office.   Another civilian employee of the IDF who also served as a supervisor will be disciplined and the head of the department in which they served will receive a letter of censure.The IDf said that the background to the incident was a broader problem of lack of discipline and inadequate attention to safety measures in Yankelevich’s unit.Yankelevich, 19, of Netanya drowned in a water reservoir near Kibbutz Kissufim, with some details still unclear as to the nature of the danger presented by the reservoir.His friends reported him missing after he entered the waters, but had not returned for longer than expected. Rescue teams located his body in the water and attempted to resuscitate him, but were forced to pronounce him dead on the scene.The army said that it “joined in the sorrow of the family and will continue to support it in the future.”