Conference on Innovation to mark first anniversary of Peres’s death

Israel and the world to mark the first anniversary since the passing of Shimon Peres. 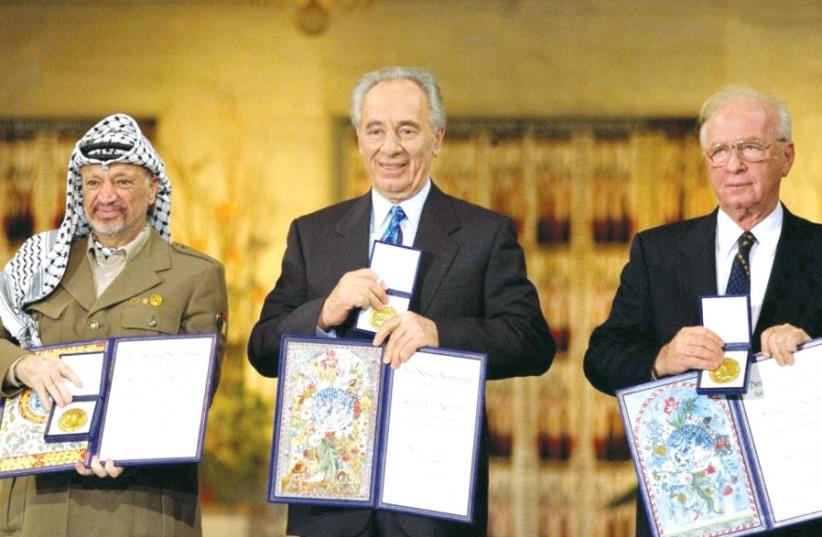 PERES receives the Nobel Peace Prize in Oslo, Norway, in 1994 alongside Yitzhak Rabin and Yasser Arafat.
(photo credit: GPO)
Advertisement
To mark the first anniversary of the passing of Israel’s ninth president, Shimon Peres, the Peres Center for Peace and Innovation has organized a series of events in keeping with the late president’s vision for Israel.Within the framework of the memorial events, a photo exhibition will be displayed at the entrance to the Peres Center and will feature photos of Shimon Peres in both formal and informal settings in Israel and abroad. The photographs are part of an enormous collection taken by his close friend and ally, Yosef Avi Yair (Juha) Engel, who worked with Peres for more than a decade, and was in charge of special projects. He continued to work with Peres, after the latter concluded his seven year term as president.In reviewing Israel’s remarkable history over a period of less than seven decades, Peres frequently said “we didn’t dream big enough” meaning that Israel is capable of much more. 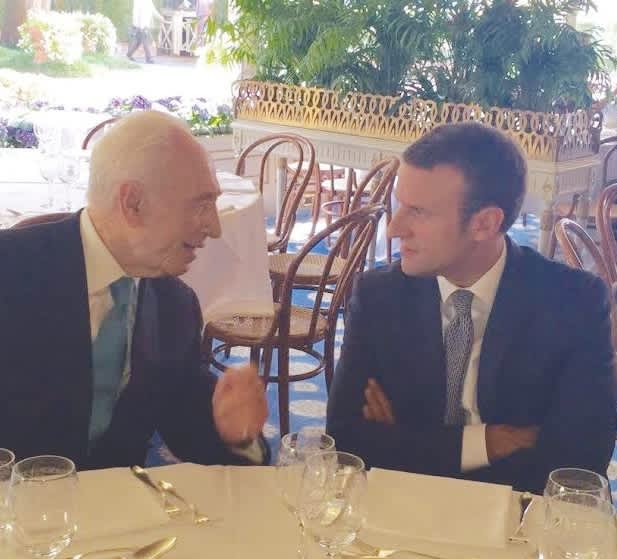 Towards this end, memorial tributes to Peres will begin on Wednesday morning of this week with a conference on innovation at the Peres Center. Keynote speaker will be President Reuven Rivlin who will speak on leadership and innovation, which is also the title of the conference. Peres Center chairman Chemi Peres, a leading venture capitalist and the son of the late president will likewise address the gathering. The conference will be attended by heads of global corporations, senior Israeli officials, , and of course members of the Peres family. Among the leaders of global companies who have indicated their attendance, and who will be in Israel not only to honor the memory of Shimon Peres but to advance his flagship initiative - the Israel Innovation Center, are Cisco Systems Executive Chairman, John Chambers; CEO of Check Point Software Technologies Ltd., Gil Shwed; International Management Consultant to Bain &Company Orit Gadosh; and Accel Partners CEO and Partner Joe Schoendorf who will also be among the speakers. Also attending will be Vice President of Facebook International, Nicola Mendelsohn; former TEVA CEO Jeremy Levin who is now the president and CEO of Ovid Therapeutics; Honorary Chjairman of the French Judaism Foundation Pierre Besnainou and many others. The Israel Innovation Center is expected to open in 2018, the 70th anniversary year of the state. . The conference on Leadership and Innovation will focus on ways to strengthen the State of Israel as an innovation and technology hub and its ability to have a powerful impact on Tikkun Olam – fixing the world.In the evening of the same day, a memorial event will be held with former US Secretary of State Henry Kissinger, senior security officials, the Peres family close friends, Peres Center partners, and dignitaries from Israel and abroad.A graveside ceremony at Mount Herzl , will be held at 11 am .on Thursday, September 14, at 11:00 a.m. Speakers will include President Rivlin and former British Prime Minister Tony Blair. Among those attending this memorial will be leading Israeli political figures, children from schools from Kfar Saba, Nazareth and Rosh Ha'ayin, which have been named for Shimon Peres, as well as political and business leaders from abroad, family and friends.Coincidentally, Rafael Advanced Defense Systems Ltd., this week announced that next year it will open a research and development branch at the Advanced Technologies Park in Beersheba adjacent to Ben-Gurion University of the Negev.Peres was the initiator Israel’s defense industries when it was difficult for the nascent stateto obtain military equipment from abroad. He laid the foundations for the aerospace industry, and the electronics industry, upgraded the military industry and founded Rafael - the Armaments Development Authority (now known as Rafael - Advanced Defense Systems Ltd). He was appointed by David Ben Gurion, Israel’s founding prime minister to spearhead the effort to establish Israel's nuclear reactors, in Dimona and Nachal Sorek.Peres always regarded Ben Gurion as his life-long mentor and never tired of talking about him. One of Ben Gurion’s key ambitions was to populate the Negev and see the desert bloom. This ambition is gradually being realized. It was given a boost with the movement of army bases to the south of the country and will gain new impetus when Rafael opens its R&D branch which will employ hundreds of engineers.