"We call on you to condemn, unequivocally and in the strongest terms, the verbal assaults and death threats unleashed on the leader of our Israeli Movement." 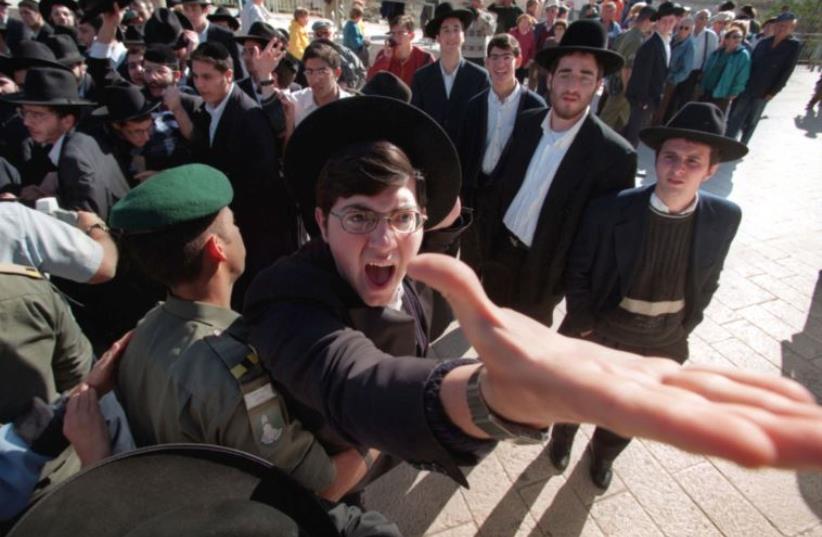 An ultra-orthodox Hassidic Jew is restrained by a Border Policeman as he screams against a group of Reform and Conservative rabbis holding prayers at the Western Wall
(photo credit: REUTERS)
Advertisement
Conservative Movement leaders sent a assertive letter to Prime Minister Benjamin Netanyahu, calling on him to take action against Ultra-Orthodox yeshiva members who issued death threats toward head of the Conservative Judaism movement in Israel, Dr. Yizhar Hess, during his visit to the Western Wall. "We call on you to condemn, unequivocally and in the strongest terms, the verbal assaults and death threats unleashed on the leader of our Israeli Movement," the letter opened. "We ask you to issue clear instructions to the police to engage and protect all worshipers who come to the Western Wall.""This disgraceful assault on him reverberates within each one of us," the writers claimed. "Not surprisingly, it is incidents like this that serve to widen the gap between Israel and Jewish communities abroad, making them wonder whether Israel still represents their Jewish values.""Your silence in the face of this mounting intimidation and violence against our leaders is tantamount to your tacit approval. We demand that the perpetrator be dealt with in accordance with the law," the writers declared. "We insist that you come out and publicly issue a statement condemning the violence and intimidation used by the ultra-Orthodox community to suppress our right to worship as Jews at our religion's holiest site."