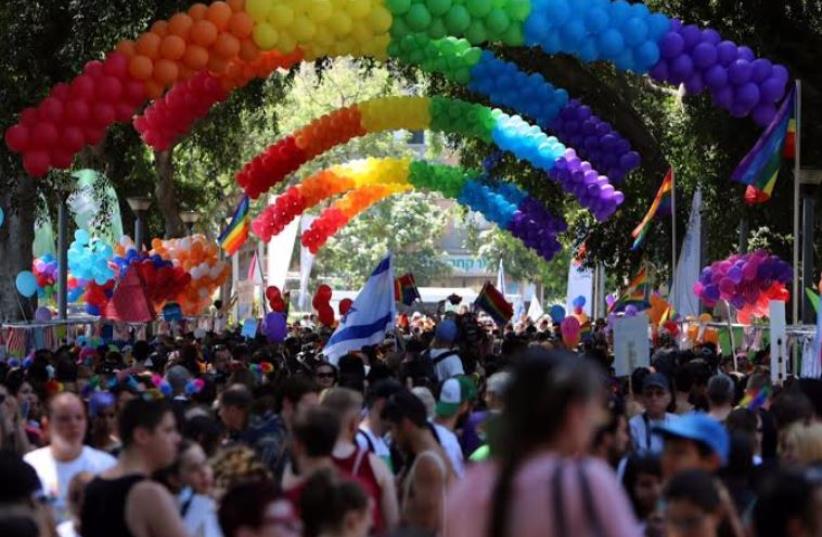 Gay Pride 2015
(photo credit: GUY YEHIELI)
Advertisement
In a sign of the increasingly changing landscape of Jewish life in the United States, the Conservative movement this week published a “completely egalitarian and LGBT-friendly” prayer book that includes prayers for, among other things, single women adopting children and gay engagements.The Siddur Lev Shalem is “both more traditional and contemporary” in several ways, senior editor Rabbi Ed Feld told The Jerusalem Post on Tuesday. He explained how it contains both the traditional Hebrew texts of prayers, as well as an updated translation in the modern vernacular and prayers tailored to fit life cycle events experienced by contemporary Jews.Alongside a transliteration for those who do not speak Hebrew and a detailed commentary citing the meanings and origins of the various parts of the prayer service, Feld said that he and his collaborators sought to introduce an English translation that is both “more contemporary in its language and gender neutral.” The traditional siddur text is written in the masculine form.In a statement announcing the siddur, Feld explained, “You can’t describe God as ‘awesome’ anymore; language and the way we use language changes, so each generation needs its own translation. This is the siddur for today’s prayers.”Feld also told the Post that new misheberachs, or supplicatory prayers usually read after the Torah portion, have been composed to reflect the needs of congregants, including for instances when men or women in same sex unions are called to the Torah on the Shabbat prior to their weddings. Prayers for single women adopting children, for visiting Israel, for being inducted into and discharged from the army and other situations that have heretofore not been addressed in the liturgy are also included.In 2012, the Conservative movement – affirming that same-sex marriages have “the same sense of holiness and joy as that expressed in heterosexual marriages” – established rituals for same-sex wedding ceremonies.The landmark vote by the Committee on Jewish Law and Standards of the Conservative movement’s Rabbinical Assembly followed a 2006 ruling by the committee “favor[ing] the establishment of committed and loving relationships for gay and lesbian Jews.”Feld said that a new devotion patterned after the kaddish (an Aramaic prayer recited by mourners) was also composed for occasions when a minyan, or the requisite quorum of ten required for communal prayers, is lacking.“It is not the regular language of kaddish but it alludes to it,” he said, explaining that the alternative was created because those attending synagogue for the recitation of kaddish may feel bad if there is an absence of a minyan.Rabbi Julie Schonfeld, executive vice president of the movement’s Rabbinical Assembly, said the siddur “has been expressly designed to meet people where they are, whether at synagogue or at home, religiously or spiritually.”She continued in a statement, “The Conservative movement, as reflected in this siddur, both upholds and honors our rich and extensive Jewish tradition and, consistent with the perspective of the ancient rabbis, understands Judaism as responsive to social change when that change promotes the essential Jewish religious value that humans are created in the divine image. Siddur Lev Shalem was created to richly reflect this relationship of tradition and modernity and to offer each individual a way to uniquely connect with prayer and the service.”JTA contributed to this report.