HaTzel is associated with radical right wing groups and has an active social media presence by which he spreads his views, which have been criticized by many as racist and inciting. 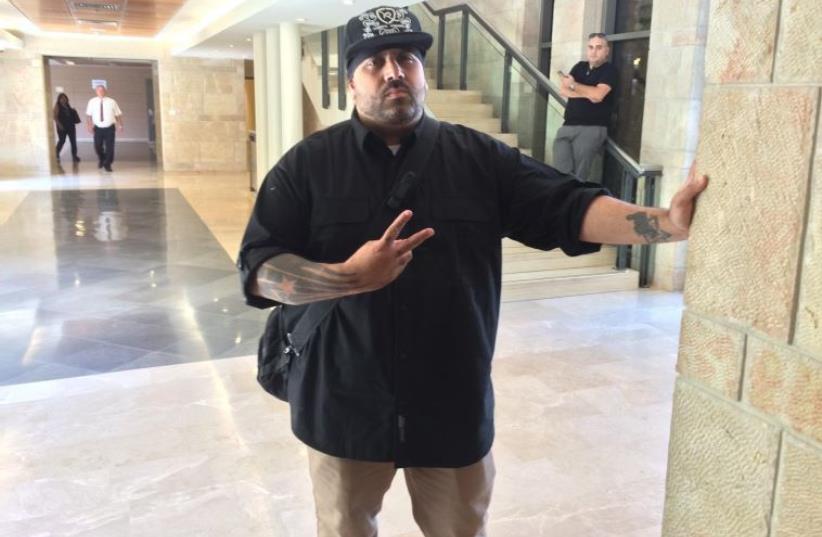 Israeli rapper Yoav "HaTzel (The Shadow)" Eliasi
(photo credit: Lahav Harkov)
Advertisement
The Likud’s brashest lawmaker may be teaming up with Israel’s most controversial rapper.MK Oren Hazan (Likud) invited rapper Yoav “Hatzel” (The Shadow) Eliasi to the Knesset on Monday, asking him to join the Likud and encourage his supporters to do so as well, in a move the former said would help the party continue to appeal to “the core of the Right.”Eliasi was part of one of Israel’s most successful hiphop groups, the TACT family, led by rapper Subliminal, but is better known in recent years for making controversial political statements and taking part in violent demonstrations, many of which were counter-rallies against left-wing activists.He is associated with radical right-wing groups and figures, like Hebron activist Baruch Marzel, soccer hooligans La Familia, and anti-miscegenation group Lehava, and uses social media to spread his views, which have been criticized by many as racist incitement.Hazan has been a lightning rod since entering the Knesset last year.He is currently suing a journalist for broadcasting an investigative report indicating that he provided prostitutes and crystal meth to Israeli patrons of a casino he managed in Bulgaria before running for the Knesset.Knesset Speaker Yuli Edelstein refused to allow Hazan, then one of his deputies, to run Knesset meetings, and the freshman MK has held a grudge ever since.Hazan is known for making colorful statements – he has proudly compared himself to US presidential candidate Donald Trump – and baiting Arab lawmakers, including with a catchphrase, “the Land of Israel for the people of Israel and not Ishmael.”The Likud suspended him from all parliamentary committees for truancy from votes earlier this year, and the Knesset Ethics Committee suspended him for mocking an MK’s disability.The Likud MK, who entered the Knesset in the party’s youth slot, said Monday that Eliasi “belongs in the Likud” and that he is not concerned by accusations that the rapper is racist.“In the reality we live in, whoever proudly raises an Israeli flag is called a racist, and whoever craps on the flag is called a hero,” Hazan lamented.Hazan pointed out that Eliasi has twice as many “likes” on Facebook as there are Likud members – some 240,000 – adding that someone with that many fans can’t be considered marginal.“I’m not closing my eyes to [Eliasi] as though he’s a passing anecdote. He’s paving a way that tens of thousands, even hundreds of thousands are following,” he posited.Hazan made digs at Prime Minister Benjamin Netanyahu and Edelstein while explaining the logic of recruiting Eliasi to the party.“To keep the core of the Right [in the Likud], we need to balance out the side with those who call for a two-state solution, which is not a Likud position” – a clear reference to Netanyahu – “with those who say clearly, without regard to political correctness, that we will stop those who want to destroy us,” Hazan posited.As for Edelstein, Hazan said: “I raise an eyebrow at those who criticize me for inviting The Shadow and his fans to be part of the party, when the Knesset speaker didn’t invite me to his wedding, but invited most of the Joint Palestinian List, including potential terrorists, and has Ahmed Tibi, someone who was an adviser to an arch-terrorist [former PLO president Yasser Arafat] and called IDF soldiers bloodthirsty sadists, run Knesset meetings, but I, who loves this land, even though I’m blunt, can’t run Knesset meetings.”As whether Hazan expects Eliasi to run for the Knesset, the MK said the rapper saw how Hazan is treated in the press and was turned off to the idea of taking public office, but will continue his activism outside of the legislature.“I’m sure he’ll still want to make his opinions, which many others in Israel share, heard,” Hazan stated.Eliasi refused to answer questions about joining the Likud, but a source close to him said that the rapper would join the party and encourage his fans to do so, as well.The rapper did, however, talk about surviving a recent assassination attempt.Eliasi showed The Jerusalem Post a letter from a garage in Tel Aviv to which he took his Cadillac on June 10 after it would not start, and the garage found “foreign materials were maliciously put in the gas tank, which could have cost human lives, making the engine explode when the gas tank was full.”“I was in the car with my three-year-old son,” Eliasi recounted. “My three-year old son never did anything wrong to anyone. I cannot accept this.”Eliasi said he receives threats daily because of his political opinions, and his tires have been slashed a dozen times.“Leftists and Arabs threaten to kill me. They sent me photos of my son in a coffin,” he lamented.