Controversial visitors center on Mount of Olives to be fast-tracked 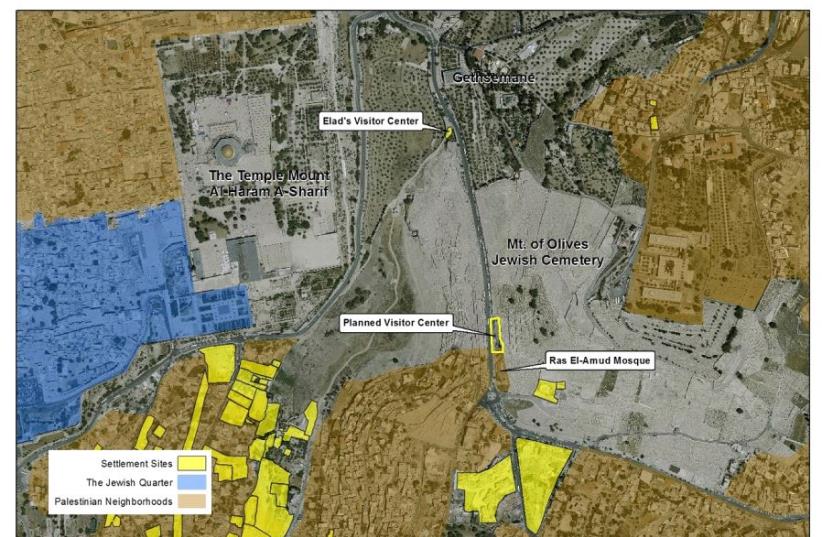 A map of the planned Mount of Olives visitors center.
(photo credit: JERUSALEM DEVELOPMENT AUTHORITY)
Advertisement
The Jerusalem Municipality has presented a special plan to expedite the construction of a visitor’s center on 1,300 square meters of land next to the Jewish cemetery on the Mount of Olives, adjacent to a mosque.The plan presented last week, initiated by the Jerusalem Development Authority, would place the center at the heart of the historical basin of Jerusalem, 300 meters from the Old City, in the volatile Ras el-Amud neighborhood.Left-wing NGO Peace Now condemned the center as a geopolitical time-bomb.“Dragged by settler organizations, the Israeli government is willing to go out of its way to approve this sensitive plan through a highly unusual procedure,” the organization said in a statement.“In the current political context, to establish a visitor center next to a mosque, and 300 meters away from the Temple Mount/Al-Haram Al-Sharif, is to play with fire. A visitor center in this sensitive area will have far-reaching implications on the future of the two-state solution, and the possibility for a compromise in Jerusalem,” it added.According to Peace Now, in order to expedite the normal planning procedure, which requires the approval of a detailed plan by the Regional Planning Committee, the authority has received permission to get approval from the municipal Local Planning Committee.Although construction plans have yet to be published, Haaretz reported that work has already begun at the site.The Jerusalem Municipality said the allocated land for the center currently serves as a parking lot, adding that the adjacent mosque will not be compromised.“There is no intention to harm the mosque, or what is around it,” the municipality said in a statement.Separately, a Jerusalem Magistrate’s Court judge on Wednesday ruled that the placement of a placard protesting limited Jewish visitation rights at the entrance to the Temple Mount on Holocaust Remembrance Day, resulting in the temporary arrest of three activists, was lawful.The sign read: “On Holocaust Remembrance Day, the Temple Mount is closed to Jews, just as many places were closed to Jews just because they were Jewish during World War II. How long will this continue?” The three activists were arrested by police on Monday for placing the placard at the Mughrabi Gate entrance.During the Wednesday hearing, Judge Aryeh Romanoff said: “The actions of the accused were within the framework of legitimate dissent, and lack any basis for the existence of a criminal offense.”Yossi Nadav, an attorney for Honenu, which champions the rights of Jews to freely visit Judaism’s holiest site, criticized the police for arresting his clients.“The police, who are supposed to be the guardians of the law, unfortunately do not respect freedom of speech and act violently toward Jews who come to protest at the entrance to the Temple Mount,” Nadav said.“I am pleased that the district court protected their freedom of speech and ruled that this was a legitimate protest,” he continued, adding that Honenu is considering filing a civil suit against the officers involved.