According to the indictment, the incident took place at approximately 1 a.m., as police conducted a patrol in the area. 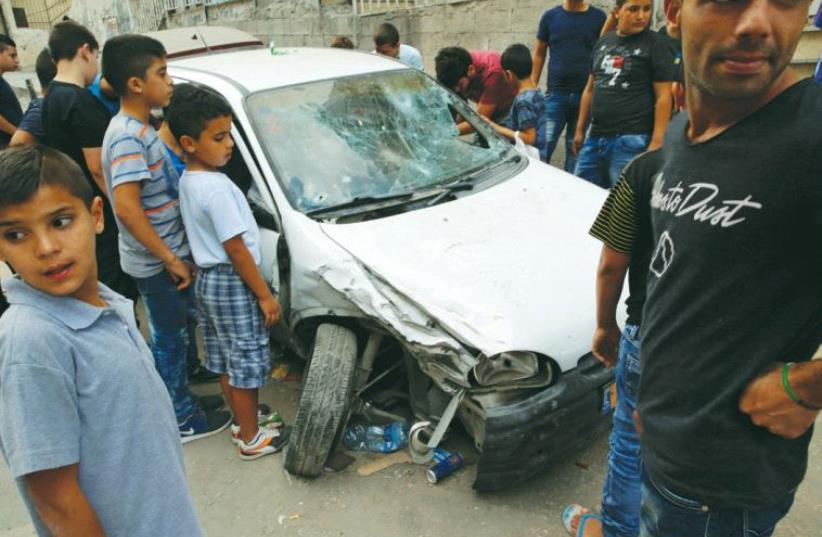 BORDER POLICE fired on this car in the capital’s Shuafat refugee camp on September 5, killing the passenger, Mustafa Nimir, and wounding the driver, his cousin Ali Nimir.
(photo credit: REUTERS)
Advertisement
Ten days after Ali Nimir was arrested and charged with manslaughter for an alleged vehicular terrorist attack against Border Police officers at a Jerusalem checkpoint, which resulted in the shooting death of his Israeli passenger cousin, an indictment on Thursday downgraded the charge to negligent homicide.The Jerusalem Magistrate’s Court decision follows dual probes by the Justice Ministry and police into the September 5 shooting in the Shuafat refugee camp in northeastern Jerusalem, after video evidence cast doubt on the need for deadly force.According to the indictment, the incident took place at approximately 1 a.m., as police conducted a patrol in the area.Officers were walking toward their vehicles to leave when a car rapidly approached, despite repeated warnings to stop.Border Police officers fired on the vehicle, shooting the driver and passenger. The passenger, identified as Mustafa Nimir, 27, from Ramat Gan, was killed; the driver, his cousin, Ali Nimir, 25, sustained moderate wounds.“The police blocked the accused, signaled repeatedly with a flashlight and shouted in Hebrew and Arabic that he must stop,” the indictment states. “The defendant broke the police barrier at high speed and did not stop, despite all the warning and deterrent measures applied to him.”“In response,” the indictment continued, “after the police felt in mortal danger, they were forced to fire at the vehicle. As a result [the passenger] died from a bullet wound to his head.”Ali Nimir, who was hospitalized, was charged with a litany of crimes, including involuntary manslaughter in his cousin’s death.However, video taken of the shooting airing on Channel 10 days later showed the officers firing on the vehicle after it stopped, possibly conflicting with initial reports of what took place.Moreover, Mustafa Nimir’s Jewish girlfriend, who was in a car directly behind him, told Channel 10 that bullets also struck her vehicle, adding that shooting stopped only after she identified herself as Jewish.In the news segment, the girlfriend claimed that security officials visited Mustafa Nimir’s parent’s home and apologized for using excessive force.During a hearing on Monday, the presiding judge criticized police for what he deemed to be a haphazard investigation, citing a “significant” gap in the timeline proving that Ali Nimir directly caused the death.“There is significant distance between the behavior of the defendant and the death of his cousin, and no basis for charging him for the death of the deceased, even during the arrest phase,” the judge said.Nonetheless, noting that Ali Nimir was never issued a driver’s license and drove the vehicle recklessly past the police barrier while intoxicated and high on “dangerous drugs,” he is being charged with criminally negligent homicide, endangering the lives of police, driving without a license and insurance, and driving under the influence of alcohol and drugs.“In his actions,” the indictment concluded, “the defendant negligently caused the death of [Mustafa Nimir].”Ali Nimir’s remand has been extended, pending the ongoing investigation into the shooting.