Court to Beit Shemesh: Pull down those modesty signs

Anti-extremism activists hailed the court's decision as an unprecedented victory in their campaign to halt harassment and intimidation of women in the city. 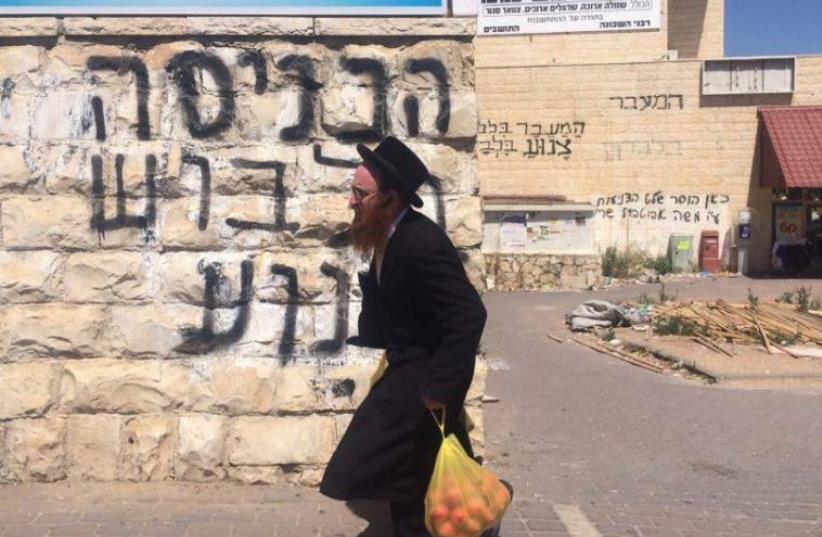 Graffiti and signs in Beit Shemesh tell people to wear only modest clothing
(photo credit: SAM SOKOL)
Advertisement
The Jerusalem District Court has ruled that Beit Shemesh Mayor Moshe Abutbul and the Beit Shemesh Municipality will be in contempt of court if they fail to remove unlawful modesty signs in the city.Anti-extremism activists hailed Wednesday’s decision as an unprecedented victory in their campaign to halt harassment and intimidation of women in the city.The signs, which warn women to dress modestly and not to linger in certain places in haredi neighborhoods of the city, were first ordered removed by the Beit Shemesh Magistrate’s Court in January 2015.The signs remained in place, however, and the issue was sent to the Jerusalem District Court, which in January 2016 demanded that they be removed, a demand that was not complied with.In his ruling on Wednesday, Judge Yigal Marzel decried the lawlessness in the extremist neighborhoods of Beit Shemesh, in which, he noted, the authorities appear to have abandoned the area to violent radicals.Marzel quoted the response of Abutbul and the Beit Shemesh Municipality, in which they described the situation in the city as “a war” and “catastrophic,” where extremists are violent toward IDF soldiers, pedestrians and police personnel, throw stones at people and vehicles, and harass and curse people.“[The state] cannot reconcile itself to this situation, and all the authorities need to take the necessary steps to restore order and observance of the law,” wrote the judge.Marzel therefore ruled that if the Beit Shemesh Municipality does not remove the modesty signs by July 6, it will be held in contempt of court and fined NIS 10,000 a day, every day, until the signs are removed.“It must be hoped that the Beit Shemesh Municipality will finally understand that the time has come to put the rights of the women of the city at the top of its priorities and not at the bottom,” said attorney Orly Erez-Likhovski, a lawyer for the Israel Religious Action Center, the legal arm of the Reform movement in Israel, who represented the plaintiffs in the case.Violence and harassment of women in certain areas of Beit Shemesh have spiked in recent months, with residents reporting that they cannot enter Ramat Beit Shemesh Bet, the most extremist neighborhood, without experiencing intimidation, curses and even having various objects, including stones, thrown at them.Last month, a woman was left bleeding from her head after an extremist haredi youth hurled a stone at her, reportedly shouting that she was not dressed modestly enough.A spokesman for the Beit Shemesh Municipality said it would “study the decision and act accordingly,” but he insisted it had on several occasions removed the signs in question.The municipality did not have the requisite means to deal with the problem decisively, he said, adding that other cities, including Jerusalem, have similar signs, but their municipalities have not been fined.