For inspiration for the custom-made new line, Dror said she drew inspiration from Victorian and tribal influences. 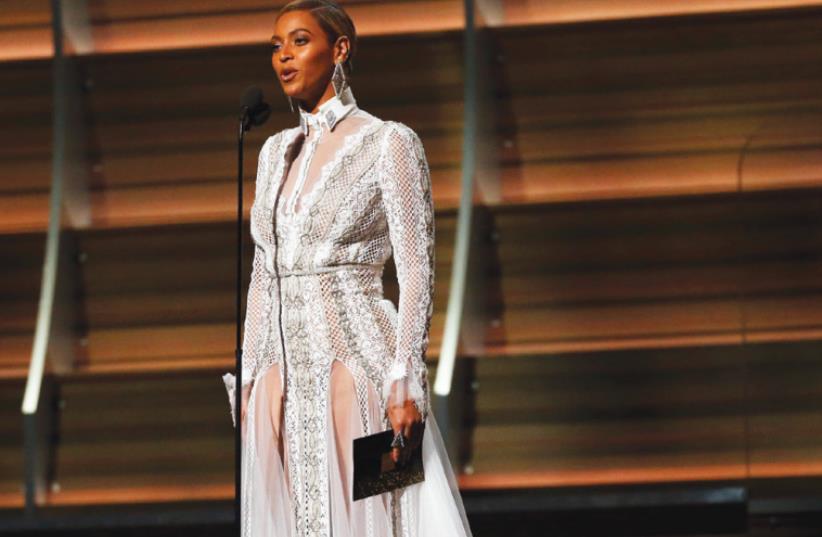 BEYONCE PRESENTS the Best Record of the Year award during the 58th Grammy Awards in Los Angeles.
(photo credit: REUTERS)
Advertisement
Israeli fashion designer, Inbal Dror, announced Tuesday that she is designing a line of dresses for Beyonce's much-anticipated world tour "Formation."
Beyonce's stylist approached Dror with the offer personally, after the award-winning singer fell in love with the dress Dror designed her for the Grammys earlier this year.
For inspiration for the custom-made new line, Dror said she drew inspiration from Victorian and tribal influences that are featured in the singer's music video for her new hit "Formation."
The designer said of her new project that it's like a dream come true. "There is nothing more exciting than the admiration of a trend-setting star like Beyonce. It is a great honor to be a part of her world tour."
Dror's creation that Bey wore to the Grammy's caught the eye of many fashion-forward news purveyors, which all gave the dress rave reviews.
Fashion magazine Harper's Bazaar noted: "The designer, best known for her sexy silhouettes, illusion paneling and intricate embroidery, seems a perfect fit for the 'Formation' singer, who's not afraid to walk the carpet in something sparkly or sheer." The couture publication added  that the gown was "the bridal equivalent of hot sauce in your bag, swag."Beyonce's "Formation" tour kicked off on April 27 and will continue through October.