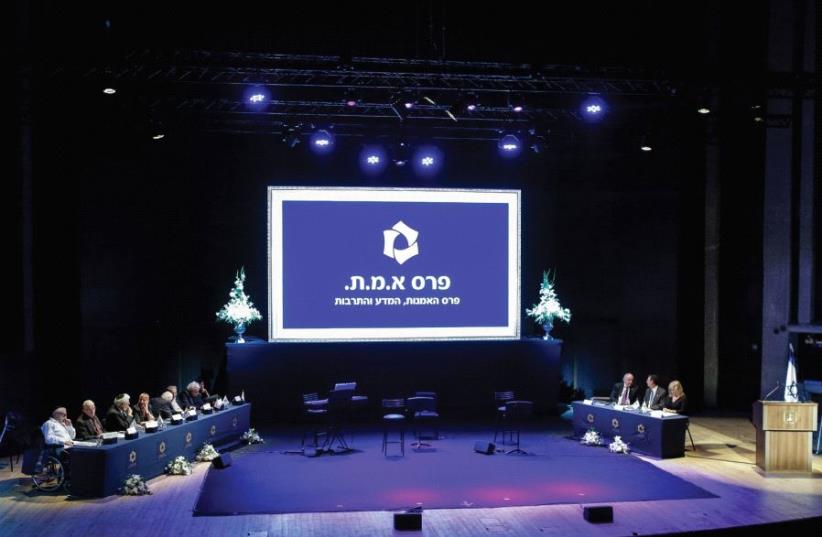 THE EMET PRIZE was envisioned as being the Israeli equivalent of the Nobel and, in fact, most Israeli Nobel winners first received the Emet
(photo credit: DAVID SALLEM)
Advertisement
The Emet Prize has announced its winners for 2017. The honor is awarded for excellence in academic and professional achievements that have far-reaching influence and make a significant contribution to Israeli society. It is given in five categories: Culture and Art, Exact Sciences, Life Sciences, Social Sciences and Humanities The intention of the Alberto Moscona Nissim Foundation, sponsor of the prize, is to “acknowledge those who view excellence as a way of life, and the fulfillment of human potential as essential to creating a better world for future generations.”“All of this year’s winners leads their field,” said foundation chairman Arie Dubson.The prize is unique in that it’s the only prize of its level given only to Israelis. Dubson said Nissim envisioned the Emet Prize as being the equivalent of the Israeli Nobel and, in fact, most Israeli Nobel winners first received the Emet.Winners receive between $100,000 and $200,000 each – their portion of $1 million in annual Emet Prize money – depending on whether the prize is shared in a particular category.“The prize is not only for those who get it,” said Dubson.“These people are an example for every other Israeli to look to and drive toward excellence.”The winners this year were: • Oded Kotler and Yevgeny Arye shared the Culture and Art prize for acting and directing.Kotler is an actor and director, most recently directing productions at the Cameri Theater of Tel Aviv. He is best known for his role in the 1967 film Three Days and a Child and won Best Actor at that year’s Cannes Film Festival for that performance.Arye has directed Tel Aviv’s Gesher Theatre since he helped found it in 1991. He was persuaded by Natan Sharansky to open the theater to serve as a bridge between Russian culture and the Israeli world, in which waves of new emigrés were arriving. Arye brought classical Russian visual staging techniques to Israel.He has performed and directed around the world, including at New York’s Brooklyn Academy of Music and Lincoln Center, and Washington’s Kennedy Center.Many of his plays center on the Holocaust with modern story lines. Arye said he is inspired by writers Anton Chekhov, Isaac Bashevis Singer and Fyodor Dostoevsky.• Technion electrical engineering Prof. Jacob Ziv, a leader in the fields of data compression, information theory and statistical communication theory, was the winner in the Exact Sciences category.Ziv won the 1993 Israel Prize for exact sciences and other prizes for contributions to information theory, the theory and practice of data compression and technological innovation.• Prof. Zelig Eshhar of the Weizmann Institute of Science, Rehovot, and Prof. Alexander Levitzki of Hebrew University of Jerusalem’s Department of Biological Chemistry won the Life Sciences prize for their cancer research.Eshhar is known for an innovative adaptive immunotherapy treatment technique.He discovered that patients with advanced blood cancer could go into remission, or even be cured, if they were given T-cells genetically modified with synthetic molecules called chimeric antigen receptors. Such T-cells target and destroy tumor cells.Eshar has been conducting T-cell research for more than a decade.While his first human studies were done in the US, Eshhar first tested his theory in Israel on rats and mice, and said in 2016 that he “had been saying for years that we could do this on people.”Levitzki is similarly known for developing specific chemical inhibitors of cancer-induced protein kinases, pioneering several inhibitors as effective agents against cancer and other diseases. His research served as the basis for the development of two key anticancer drugs: Imatinib, sold under the brand name Gleevec, among others; and Sutinitib, which is marketed as Sutent. He has won several awards.• Assaf Razin won the Social Sciences prize for helping elucidate the theory and consequences of population growth and its interactions with surrounding economic environments. A Cornell economics professor and Tel Aviv University emeritus, he has guest-lectured at Harvard, Princeton, Northwestern and the University of California, Berkeley.• Prof. David Heyd was awarded the 2017 Humanities prize. Heyd has been teaching at the Hebrew University in Jerusalem department of philosophy since 1976, specializing in ethical theory, political philosophy and bioethics.He has published articles on topics ranging from experimentation on human subjects, to wrongful life claims, to prenatal diagnosis. He has publicly debated laws and regulations on bioethical issues in Israel. Heyd has served on government committees on surrogacy, euthanasia, organ donation and genetic technologies and held positions on the National Council of Bioethics and Israel Association of Fertility.In a recent class, Heyd analyzed the value of preservation versus conservation: “I don’t believe the Mona Lisa has an aesthetic value – or any value at all – if there are no human beings anymore in the world,” Heyd explained.“If the last man on the planet decided to tear up or burn the Mona Lisa before committing suicide or dying himself, then I think there is nothing we can say, morally speaking or from a values point of view, about this action. The preservation or conservation of Mona Lisa in a human-less world does not have any meaning.”This article was written in cooperation with the AMN Foundation.