Israeli singer, composer and performance artist Noam Enbar speaks to the ‘Post’ on his unique series of live events presented throughout the Tel Aviv Museum of Art 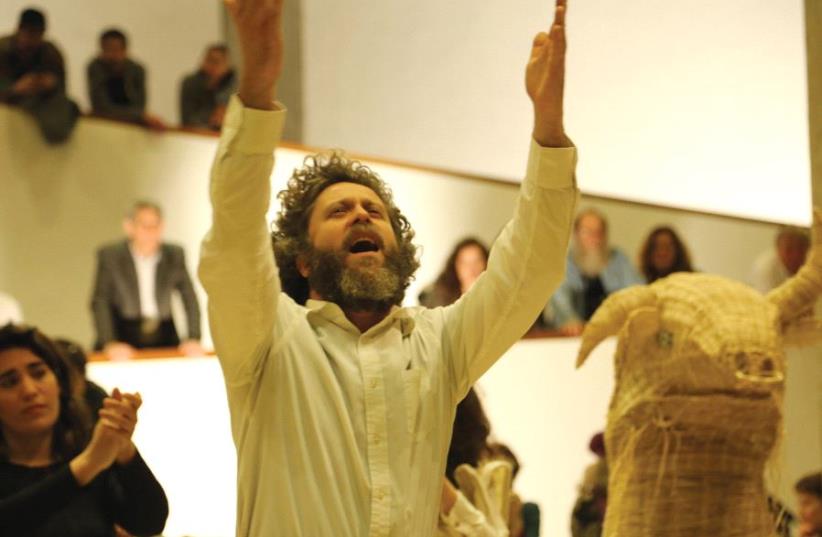 NOAM ENBAR leads a choir of singers through various unidentifiable gospels and chants in his first performative event at the TA Museum of Art.
(photo credit: ITAMAR MENDES FLOHR)
Advertisement
With his sizable mane of saltand- pepper locks, Noam Enbar (b. 1978) looks like a combination of Beethoven and Einstein. More than just a visual similarity, this resemblance is in fact quite indicative of the atypical format and stylings of Enbar’s work. In his unique series “Preaching to the Choir,” on show at the Tel Aviv Museum of Art, Enbar creates musical-ritual works infused with local references and charged with mythical energy. This was made evident from the first performance event, where Enbar led a choir of singers through various unidentifiable gospels and chants culminating in a prayer to Bar Rafaeli, a symbolic representation of society’s worship of beauty and wealth. While each part of the series is completely different, Enbar consistently delivers irreverent, yet simultaneously virtuous works that leave the audience wanting more.What is your artistic background? I was born in Tel Aviv, so working in the museum is nostalgic for me. My father is a sculptor, and he actually still teaches at the Tel Aviv Museum School, so as kids we would come to the museum a lot. My musical and artistic background is kind of chaotic. I started playing classical piano when I was five, but then I stopped when I was 12. Actually I stopped completely with music and thought I would be a painter or an architect, and then in high school I started playing again with Yammi Wisler, our duo is what later became my band Habiluim. I did a first degree in cinema at Tel Aviv University, a masters degree in fine arts at Goldsmiths College, London, but actually I remained a musician all that time.Tell us about your work ‘Preaching to the Choir’? At the museum, I’m staging different works, some completely new, some have been evolving during the past two years or so, to combine one larger continuous piece. All these works are live events taking place in a public space, which is the museum – my materials are people who sing. The inclination is toward the ritualistic and toward some kind of nuanced theatrical effect. This takes place from January to July; some works reoccur, or occur over a period of three to four continuous days. It is not the same performance repeating itself, but different works which are somehow connected.Where did the idea for this work come from? I’ve never done anything like this. I think it all stemmed from my dialogue with the curator Ruti [Direktor], she actually created this thing with me. She brought the perspective of something she wanted to do: a long-scale time-based work that requires multiple visits and an accumulating experience over six months. In addition, my work with poet and playwright Yonatan Levy and director and dramatist Nir Shuloff over the past years, pushed me very much in this direction. Both are main collaborators and contributors to “Preaching to the Choir.”Why do you focus on the theme of ritual? In 2008 I did a Master of Fine Arts at Goldsmiths College, London. There I experimented with performance, taking what I do, which is composing music, and finding new ways to present it, to charge it, new contexts. Then the idea of ritual started creeping into my work.Rituals usually have a clear purpose. Sometimes it’s very simple, primordial, like celebrating the passing of a season. There is this idea in religion that if you don’t celebrate something, even something apparently beyond our control, it may not happen, as if winter would never end and spring never come if we don’t act according to tradition, if we don’t manage to get the ritual right. From a religious point of view, there is a connection between our actions and what goes on. This is also the case with these works, which try to evoke the same gravity, assuming this position of affecting the world in an indirect, almost metaphysical way, remaining also of course somewhat ironic, somewhat humoristic. The works are, therefore, on a thin line of ambivalence between ritual and art, as my references are always strange, non-defined.

Do you consider yourself a religious person? I am religious, but certainly not just Jewish or Christian or Buddhist; I am all of them. For myself, when I go into a church I am Christian, when I enter a synagogue I am Jewish, when I enter into a mosque I am a Muslim. For me religion is a human potential. I am also non-religious. When I go to a meeting of anarchists, I am an anarchist, because I can relate to many things about that. Sometimes I don’t believe in God and sometimes I do.When is the next event? The next one is this Saturday. It’s titled “The Rain Is Gone” and it’s a participatory event, in the sense that the audience is invited to participate. We take a famous Israeli agricultural song dealing with the passing of winter and beginning of spring, turning it into an expressive polyphonic chant. The participation of a group of asylum seekers from Eritrea and Sudan in this public rite throws the event into the realm of metaphor, where winter is associated with oppression and spring with the yearning for freedom. The work deals with the desire to free ourselves from outside oppressive political forces, like our government or the one in Eritrea, or internal oppressive forces, that are as dangerous.

‘The Rain is Gone’ will take place at the Tel Aviv Museum of Art on March 25 at 12 p.m. For more information about this and other of Enbar’s upcoming events, visit: www.tamuseum.org.il/about-the-exhibition/noam-enbar.
Advertisement
Subscribe for our daily newsletter