A Cinderella story for the digital age 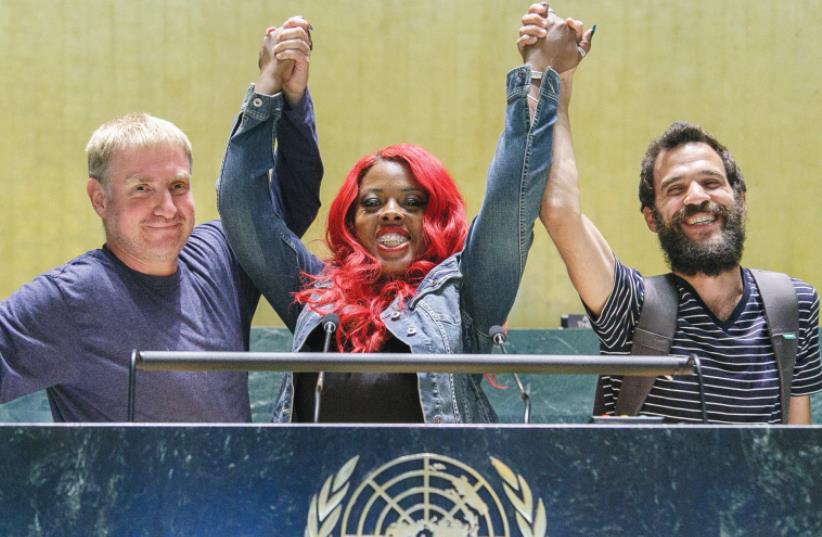 IDO HAAR (left), Princess Shaw and Kutiman attend a special screening of ‘Princess Shaw’ at the UN headquarters in New York
(photo credit: VICTOR MANUEL RODRÍGUEZ UROSA)
Advertisement
“I listened to many of her songs and I believed in her, her honesty, her brave heart, it touched my heart,” said Ido Haar, director of the moving and original documentary Presenting Princess Shaw, which was just released in 12 cities throughout the US, talking about how he decided to make the film.It is also available on a number of streaming platforms, among them Amazon, iTunes, YouTube, and Time Warner Cable.The movie, which has won acclaim and prizes all over the world, tells the story of New Orleans singer/songwriter Samantha Montgomery, who releases her work on a YouTube channel, using the name Princess Shaw. A survivor of horrific childhood abuse, Montgomery’s heartfelt songs caught the attention of the Israeli musician known as Kutiman, who edits YouTube music videos together so that different musicians all appear to be playing one piece together, in a way that enhances each composition.Kutiman decided to create a piece with one of Princess Shaw’s songs, and Haar, who had been considering making a film about Kutiman’s YouTube artists, became interested both in Montgomery and the upcoming video.Haar contacted her via Facebook and she agreed that they would meet when he was in the US for another project.“We met in a hotel. She came with a friend. She was suspicious, at first: who is this person from the other side of the world coming to talk to her? We went to an openmic evening where she was performing...and I fell in love with the music there. We went to film her at the old people’s home where she works [Montgomery’s day job is as an aide in a nursing home]... It went very well, it was obvious she would be one of the main figures in my documentary.”But as he got to know her and began to understand what the release of Kutiman’s video would mean to her, he realized that the movie should be about her and Kutiman. Kutiman, whose work is widely known internationally and who was honored in an evening at the Guggenheim Museum in New York (which is captured in the film), is an eccentric figure who lives on a kibbutz, prefers not to be interviewed and does not notify the musicians whose work he is using in videos in advance. As per his philosophy of free use of work (which he posts on his Thru-You site) he neither pays nor charges for the work he does. His videos are widely seen, and they give extraordinary exposure to any musician featured in them.When Haar started the film, Montgomery knew only that she might be featured among many YouTube musicians in the movie, and had never heard of Kutiman.“I knew that the Kutiman’s [remixed video of the] song would be released some time soon, but I didn’t know when it would happen... I knew she would love it that someone loved her music... I wanted to catch the moment as it happened when she discovered that he had used it... I didn’t know what would happen and I didn’t know how dramatic it would be. I got very excited for her.”That moment is at the heart of Presenting Princess Shaw, but it is just one part of an extraordinary story. When Montgomery learns that her song, which had fewer than 100 views, has been included in this video, she is shocked and delighted as more than a million people watch it in just a few weeks. Montgomery had been working in isolation in her apartment, struggling to pay her bills and living a lonely life in the shadow of the punishing legacy of her childhood. The discovery that someone a world away has been listening liberates her, and she travels to Israel, where she meets Kutiman and performs with his band at the Habima Theater in Tel Aviv and all over the country.At the Jerusalem Cinematheque, their performance following a screening of Presenting Princess Shaw in March received a standing ovation, the first one I have ever seen there. She has performed with his band all over the world, and is at work on an album of songs produced by Kutiman.“I didn’t see it coming that she would come to Israel, and that they would collaborate,” said Haar. “It was not planned...It was very important to me to see what happened to her songs and to her when the music got out into the world.”Although Montgomery seems to gain in confidence, inner peace and self esteem as the film progresses, what gratifies her is having her voice heard. She has not become rich from the video or the documentary, said Haar. She still works at the nursing home, but she takes leaves of absence to travel with the film.“The story of Princess Shaw and Kutiman is not about success in a conventional way, but about her potential and her reality,” said Haar.To find out where the movie is playing and to get information about streaming, visit www.presentingprincessshaw.com.