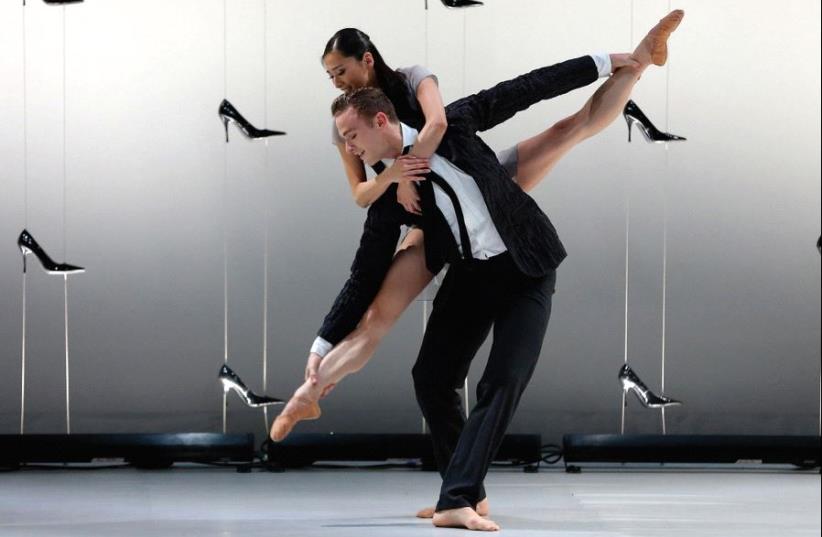 The Malandain Ballet Biarritz
(photo credit: OLIVIER HOUEIX)
Advertisement
The tale of Cinderella has been told many times using many different media. In nearly every version of the story, Cinderella’s stepmother is an illtempered, spiteful woman who takes her mood swings out on the young orphan.“I made the choice to give the stepmother a more intimidating side,” explains choreographer Thierry Malandain of his decision to put the stepmother on crutches. “I also wanted to explain her bad temper. It is as if she is suffering on the inside from not being able to walk like a young girl, even if it’s all a farce because she can walk very well without the crutches.”Such an interpretation is what makes Malandain’s Cendrillon so special and unusual. Where many of his peers choreographed the tale, Malandain delved deep into the psychology and symbolism of the characters, exposing universal emotions. This month, France’s Malandain Ballet Biarritz will perform the ballet at the Tel Aviv Performing Arts Center and the Kiryat Motzkin Cultural Center.Malandain created Cendrillon in 2013 as a commission for the Royal Opera of Versailles.“What attracted me to this ballet was that the central theme of Cinderella is recognition. Of course, being liked, being acknowledged by others is a necessity for everyone. But for an artist, it is almost vital. So Cinderella really spoke to me,” he says.If you are expecting to see flouncing tulle dresses and colorful scenery, this Cinderella will leave you stunned. Instead of illustrating the animated version many of us grew up with, Malandain took great creative license in designing a sleek, sharp and minimalist set for his fairytale. The back wall of the stage is covered with hanging stiletto pumps – a nod to the crucial moment in the plot. The costumes stay in black, white and nude hues, with embellishments such as wigs and sequins. Whereas most directors chose female actors or dancers for the roles of the stepmother and stepsisters, Malandain went with bald men.“It was a tradition long ago for men to play character roles. I simply used this tradition again to point at their absurdity,” he explains.Though 2013 offered Malandain his first opportunity to choreograph the ballet of Sergei Prokofiev’s Cinderella, he had worked on a production of the tale long before. In fact, a few of the most prominent and unique esthetic elements of his ballet were drawn from his prior experience with the score. For example, Malandain plays with using the 20 dancers of the cast as both humans and otherworldly creatures.“I had the opportunity in 1988 to choreograph Jules Massenet’s version of Cinderella’s divertissement [short dance]. In his opera Cendrillon, the fairy godmother is surrounded by elves; it is these elves who appear in a more abstract way,” he says. This abstract touch is felt very strongly in Malandain’s interpretation in moments where the cast of 20 prance through the space clad in nude leotards.All told, Malandain spent a full year in preparation for this ambitious production.“Once in the studio with my dancers, it took us about a month and a half,” he says.In the ball scene, where Cinderella reunites with the prince, the two lead dancers are surrounded by mannequins, held up by dancers. This choice, which continues in the abstract visual line Malandain established in the opening scene, was made as a solution to a problem.“The most challenging thing about the making this ballet,” divulges Malandain, “was the ball scene. I didn’t have enough dancers to choreograph it, so I used mannequins.”The choreographer’s favorite moment comes at the tail end.“In the finale,” he says, “which has nothing to do with the ballet, the two mean stepsisters come back as if they just stepped out of the novel Good Littles Girls by the Countess of Segur. That is my favorite scene.”