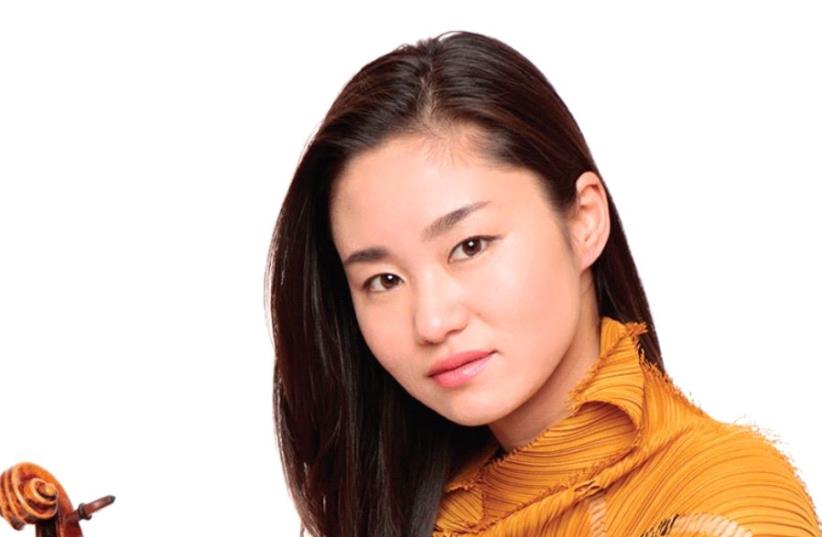 Japanese violinist Sayaka Shoji
(photo credit: KISHIN SHINYAMA)
Advertisement
Sayaka Shoji (31), the Japanese violinist who was described by Gramophone magazine as “a formidable musician, able to draw on huge reserves of stamina and the unflinching equal of anything thrown at her,” returns to Israel to perform the Tchaikovsky Violin Concerto with the Jerusalem Camerata under the baton of Alexander Bernstein. The program also features Beethoven’s Symphony #7.The violinist, who appears regularly with the world’s leading conductors, started her international career at a very early age.“I was four when I said I wanted that instrument [the violin], although first I wanted to be an opera singer. Unfortunately, I had a broken voice since I was born, so I thought the violin was a good alternative. My mother waited more than a year to be sure that it was not a passing fancy, so I got my first violin when I was almost six,” she says.It was in 1997 when Sayaka Shoji came to Israel for the first time, to join the Keshet Eilon International Master Course. She later appeared with the Israeli Philharmonic under Zubin Mehta.“Israel has given me so much support in the first steps of my career although I was not born there.” she says, “I’m always grateful for this.”“More and more of my repertoire is built around the Romantic period and later,” the violinist says. “Of course I love Bach and Mozart. I also play some contemporary works. But I was asked more frequently to play music of later periods, specially Russian. I feel certainly more at home playing that repertoire. In addition, I feel that the music of composers such as Schubert, Schumann and Brahms is closer to my heart.”Ms. Shoji, who plays a “Recamier” Stradivarius violin made in 1727 (which some say belonged at some point to Napoleon Bonaparte), says that she has no short-term or long-term plans. “I love music and that has been my only driving force from the moment I got my violin. I consider myself like an artisan. I want to do my work well because I love it, and if people are happy, I’m happy.”Sayaka Shoji will perform at the Jerusalem Theater on July 15 at 9 p.m.