A Jew grows in Tel Aviv

The White City is experiencing a boom in religious offerings for both immigrants and internationals. 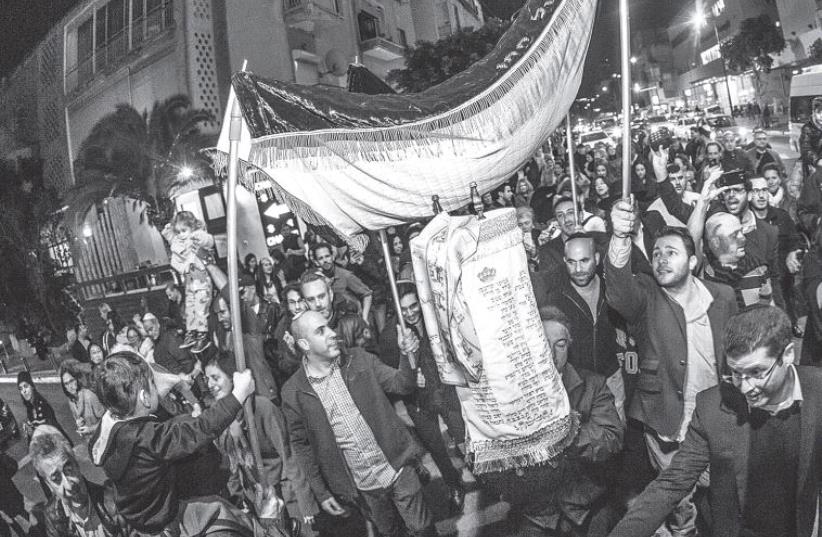 THE AM YISRAEL Foundation takes to the streets to dance and celebrate a new Torah scroll, dedicated in honor of the soldiers who died in Operation Protective Edge.
(photo credit: AM YISRAEL FOUNDATION)
Advertisement
By definition, a synagogue is house of prayer for Jews. But in Tel Aviv, synagogues and their communities have been transformed into the predominant social circles for the city’s growing numbers of young immigrants interested in religious life in the White City.In many ways, the city’s religious renaissance mimics the style of Judaism common outside Israel, with highly organized Jewish communities centered around a synagogue but supported by shared social activities, education and community activism.Many of the synagogues and communities seem to thrive on offering a warm, accepting atmosphere for those who might not feel comfortable at an Israeli synagogue – or any religious place at all.This article highlights just a tiny sample of the religious offerings for olim in Tel Aviv. It hardly even encompasses all of the religious communities (estimated at 12) frequented by the city’s internationals. Nor does it include the myriad of synagogues and Torah learning institutions from all streams of Judaism tailored for Israelis in the city.This could not have been said just a few years ago. Though the city once had vibrant religious life, most accounts say that things began to change in the 1960s as the younger generation stopped attending. By the time the new millennium came around, most of today’s most popular synagogues were shuttered, others were hardly able to draw a minyan. And a handful were only beginning to cultivate a small community of congregants.
Tel Aviv International Synagogue

The French community in Tel Aviv has experienced a tremendous surge in aliya in the past several years, creating a great need for religious services for the community.For this reason, Lev Israel came to the city in late 2013 to cater specifically to the needs of French olim. It is the Israeli branch of a Jewish outreach organization in France headed by French Rabbi Elie Lemmel. The first location was in Neveh Tzedek, but in just a few years it has already opened two additional sites.Eitan Galam, director of the Rabin Square location, said the young, single French population in Tel Aviv has steadily grown in the past decade. Galam made aliya from Paris by way of New York about eight years ago, with his wife, Joy, who also works with Lev Israel. Though at first they mainly hosted Shabbat meals with the city’s young professionals, the needs of their congregants have changed.Galam said over the past two years especially, more and more French families with children have moved to Tel Aviv. This has put a focus on creating education needs.A kindergarten was opened at Lev’s Yona Hanavi Street location, which was previously an abandoned building filled with homeless squatters. The Rabin Square branch is now home to a beit midrash for learning Torah. On top of that, activities in the city include regular Torah classes, prayer services, yoga classes, a women’s theater group, children’s choir and even parenting classes.He estimated the community currently consists of about 1,000 people, 95% of whom are French and come from all levels of religious observance. Galam said the organization aims to impart Jewish values in an open, respectful way that will make French olim feel at home.“We try to organize anything [that can] bring the community together and [allow people to] make friends,” he said. “Even though they are in the heart of Tel Aviv, people are looking to have meaning to their life, have stability and build families.”Galam also spoke about efforts to protect defunct synagogues in the city from being sold to real-estate developers, especially due to the high price of land.“Clearly, we are opening more synagogues, but it’s a fight,” he said. In one case, that he described, the fight was lost when a former synagogue on Nordau Street was turned into a gym. He described the absurdity that synagogues are forced to rent out business space for their activities while businesses buy out old synagogues.
Chabad on the Coast

The most recent addition to the Tel Aviv religious scene has been Chabad on the Coast, the only Tel Aviv branch of the hassidic group dedicated to the English-speaking community.It is run by Rabbi Eli and Sara Naiditch, who arrived in Tel Aviv with their young family from Safed, just weeks before Rosh Hashana 2015.Though Chabad is an Orthodox organization, they surmise that much of the community is not. They credit an open, comfortable atmosphere as being one of the things drawing in a wide variety of Jews.The Naiditches were inspired to move to Tel Aviv after years of running programs at Ascent of Safed.“We’d met a lot of people who would come from Tel Aviv to Safed, saying they were there to have a spiritual Shabbat experience,” said Eli.“We kept meeting a lot of English speakers who said they were looking for an English-speaking Chabad House... We came to create a Chabad House that has that international feel, where you’d feel comfortable walking into.”Prayer services are based out of a small synagogue at the corner of Bar Kokhba and Bograshov streets, founded about 80 years ago. It had been closed for most of the past 15 years after the number of congregants dwindled. Right before their first Rosh Hashana last year, however, Eli happened to meet the synagogue’s former gabbai, 92-yearold Pesach Steiner, who agreed to let them use the synagogue. The Naiditches and a group of volunteers arrived to do a massive clean-up.Eli recalls that though they were hardly able to get a minyan for Rosh Hashana 5776, they already had about 150 people at their Succot festivities weeks later.“We went from a very small group of people to where our shul was packed for [2016’s Rosh Hashana] services,” Eli said. “Literally a full shul.”Now beginning their second year, the Naiditches estimate they have a combined network of hundreds who regularly attend classes, prayer services and festive holiday meals and parties.They frequently host Shabbat meals at their home, as well as Torah classes. Sara is a teacher for brides-to-be and hosts a monthly women’s event to celebrate Rosh Hodesh, the new Jewish month. Over the summer, Eli taught a sixweek course called “How Happiness Thinks.”They are also starting up a volunteer initiative for men and women to bake and donate halla together, as part of the global Shabbat Project on November 11.“One of the most beautiful things is when we see someone’s birthday on Facebook and you see birthday wishes all from people they met together at our Shabbat meals or other events,” Sara said, speaking of the community that has come together. “They have a Jewish home here.”In the coming year, they hope to find a larger and more permanent space of their own, since they have had to rent out spaces around the city to host events aside from prayer services – a challenge since their community is dependent on private donations.What keeps them going, though, is “love for every single Jew,” according to Eli.Sara said she is inspired to be part of the Tel Aviv community because of the idea that “every single Jew, wherever they are, is part of the Jewish people.” She said that the Jewish people are strongest when they are united. “I want to be a part of that.”
Advertisement
Subscribe for our daily newsletter