A master artist reflects on his life

‘I’m a story teller through paintings. I tell stories of how I feel,’ says 94-year-old Israel Prize-winner Yosl Bergner. 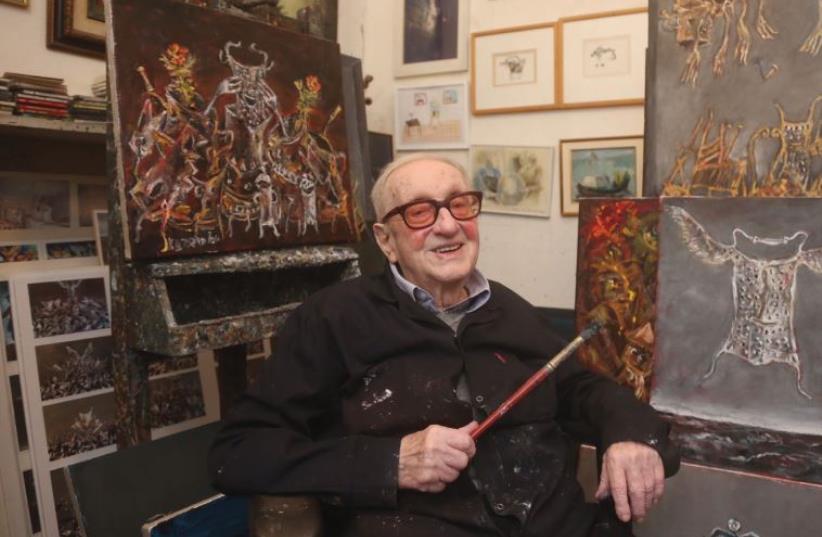 INTERNATIONALLY RENOWNED artist Yosl Bergner sits in his Tel Aviv studio on Tuesday
(photo credit: MARC ISRAEL SELLEM)
Advertisement
"If I don’t paint, I am lost," said internationally- renowned artist and Israel Prize winner Yosl Bergner, 94, with a slight Yiddish lilt and boyish charm.“It’s my language. I’m a talker; I’m a schvitzer [self-promoter]. A painting puts a certain form to it, but it’s not always that I like it.”Sitting comfortably at his desk inside his cavernous Tel Aviv art studio on a sunny Tuesday morning – surrounded by dozens of intricately-painted canvasses and sculptures reflecting the mosaic of his prodigious talents – Bergner, whose youthful energy belies his age, need not worry.
"I’m a story teller through paintings’ says 94-year-old Israel Prize-winner Yosl Bergner
“This came out because of the war,” said the bespeckled, avuncular master, as he pointed to a recently completed portrait of an apple being impaled by several nails on all sides, as two ominous-looking violet birds hover menacingly above.“This symbolizes Israel, because it is an innocent thing which is being attacked,” he said. “And this one,” he added, pointing to another nearby canvas, “I’m just beginning.”“I’m a story teller through paintings. I tell stories of how I feel.”To be sure, Bergner, whose work has been displayed in several continents, has told many stories, including his own.Born in 1920 in Vienna, Austria, he moved with his family to Warsaw, Poland, where his father, Zekharye-Khone Bergner, a Yiddish poet, essayist, playwright and cultural activist, led a Jewish community plagued by rampant anti-Semitism.A visionary Zionist, Bergner’s father, who wrote under the pseudonym “Melekh Ravitsh,” became a central figure in the Freeland League for Jewish Territorial Colonization in the 1930s, and relocated his young family to Australia in search of a viable Jewish homeland.“All I knew was that father was saving us,” Bergner said of that time. “Because already in Poland we felt the anti-Semitism and the hatred for Jews. At the universities the Jewish students had to sit separately.”“The anti-Semitism was eating me,” he continued. “So we left for Australia.”Moving to Kimberleys, located in the north-west region of the country, in 1937, before Hitler annexed Poland, the hopeful father soon came to the realization that Australia was not the Promised Land he had hoped for.Asked why Oz wouldn’t suffice, Bergner replied with a wry smile: “There are too many flies there.”Nonetheless, inspired by his beloved uncle Moshe, an accomplished artist, Yosl (who worked in a sock factory and as a roofer for several years) eventually matriculated to the National Gallery School in Melbourne.Bergner still keeps the wooden box containing the pallets and brushes his uncle gifted him as a boy, before taking his own life several years later.“You see this?” he asked, pulling the aged container out from under his desk. “This box was my childhood toy.”After serving in Australia’s army for four-and-a-half years during World War II, Bergner’s first works were of Aborigines and other downtrodden inhabitants indigenous to Australia, with whom he said he felt a kinship.Despite being thousands of miles away from the hostilities engulfing Europe, he lamented that he still was not spared anti-Semitism and alienation in Australia.“I was a stranger, and some of the painters were anti-Semites, and they said: ‘That Jew from Poland is painting our Aborigines,’” he recounted. “I painted them as I saw them.”“But I had another group [of friends],” he added, “all intellectuals, who I would go to the pub with to have drinks.”Indeed, while living in Melbourne, Bergner befriended some of the country’s most prominent young artists and writers, including Sidney Nolan, Albert Tucker, John Perceval and Adrian Lawlor – all of whom he said had a profound influence on him.“Somehow, they accepted me,” he said with a smile.His greatest artistic influence, though, was Vincent Van Gogh, whose work he dutifully studied at local libraries. And, despite creating a burgeoning career of his own as a respected artist – and exhibiting his work in Europe, Canada and America – Bergner made aliya in 1948, and has since remained in Israel.However, Bergner and his wife Audrey, who is also a noted painter, have maintained close contact with Australia through his 97-year-old sister, who still lives there, and now through the work of Limmud FSU, which displayed Bergner’s art at its first conference in the country months earlier.Last Wednesday, Limmud FSU founder Chaim Chesler and Australian Zionist Federation chairman Dr. Danny Lamm visited Bergner for an early celebration of his 95th birthday, which falls on October 13, and to tell him that his work will be displayed again at another conference Down Under early next year.Bergner’s life story, Chesler said, has been an inspiration for the 20,000 Russian- speaking Australian Jews from the former Soviet Union. 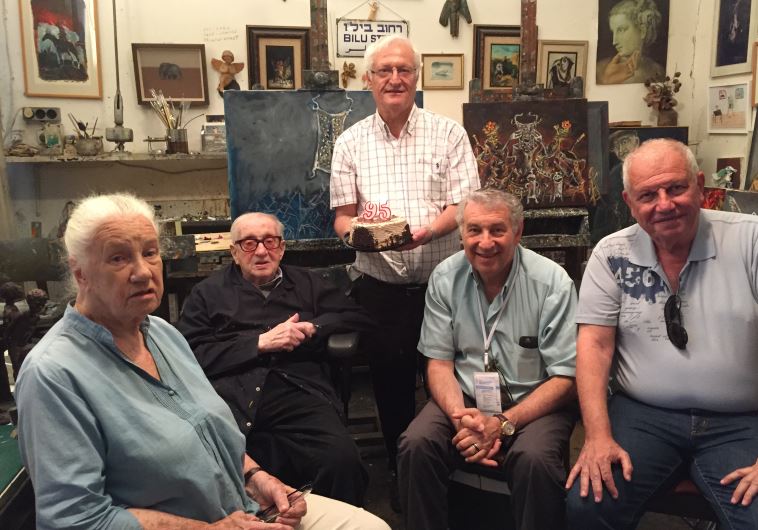 Left - Painter Audri Bergner (Yossel wife), Painter Yossel Bergner,Chaim Chesler,  Australian ZFDr Dani Lam and Mordechai Haimovich (Photo: PR)“By sharing Yosl’s remarkable art at Limmud FSU conferences in Australia, we are connecting the past to the future,” said Chesler. “And the story of Yosl’s father is the story of the Jewish people, who were searching for a homeland, and naturally, eventually chose Eretz Israel.”Asked about the exceedingly tenuous geopolitical situation in Israel today, Bergner – now a great-grandfather of four, including an aspiring painter – said that while he is deeply concerned about existential threats, and internal squabbling among Jews themselves, he remains enamored with the young nation.“Well, Jews have many ideas,” he said. “It’s a small country surrounded by enemies, but I love Israel.”“The Jews hate each other, but I don’t feel anti-Semitism,” he continued.“Jews hate Jews, you know, because they come from different cultures. The religion is the same, but with different interpretations. It’s a complicated country.”In terms of the future, Bergner conceded that he is not particularly hopeful for peace.“I see danger all the time,” he said, as he pointed again to the recent painting of the apple besieged by threats and violence.“And that’s why Israel’s army has to be strong. I’m naturally against fighting and wars, but in this place there is not much choice if we are to survive.”Although acknowledging that much of his artwork is somewhat bleak, and occasionally haunting, Bergner said his creations nonetheless embody a dark humor, partially inspired by his literary hero, Franz Kafka.His father, he proudly noted, was among the first to translate Kafka’s work in Vienna in 1924.“He [Kafka] laughs at himself a lot by going down, by suffering,” he explained.“I paint mixed-up things, but they have a little humor.”Asked the secret to Israel’s survival, Bergner replied: “Maybe the Jews stay together because we hate each other. That’s what has kept us united for all these years.”In the meantime, with respect to his own mortality and legacy, Bergner expressed both fear and hope.“In my dreams I’m frightened that I won’t be dead,” he said. “I’ll tell you: To be dead is to be dead, but the process is [not pleasant].”“But I do want to be remembered,” he added. “Maybe most of all, for my humor.”