The annual Keshet Eilon Mastercourse gets under way 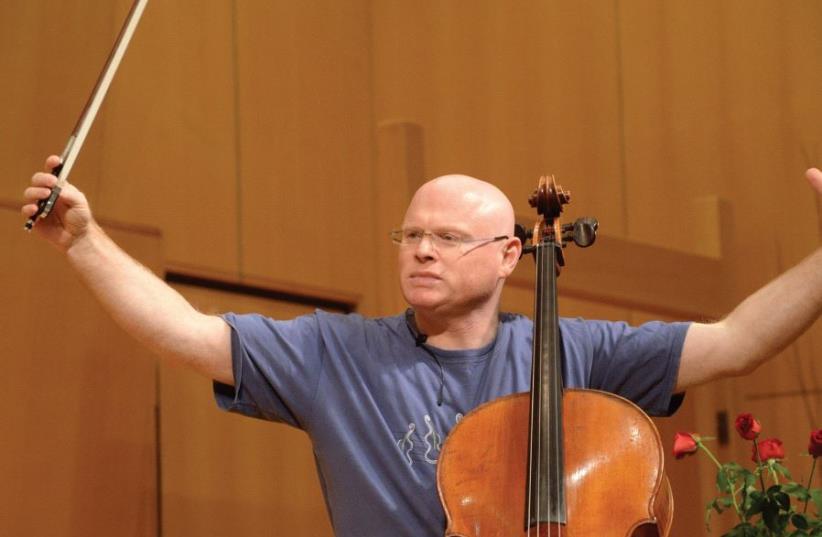 Hillel Zori has been teaching cello in keshet Eilon for 10 years
(photo credit: PR)
Advertisement
Israel has been a start-up nation from day one, long before the word “start-up” was coined. This spirit of ex nihilo – out of nothing – is an indelible part of the local mentality, and one finds examples of daring creativity everywhere.The Keshet Eilon International Violin and String Mastercourse, a highly popular annual summer course, started out as a minor project to host young violinists for two weeks in the small Galilee kibbutz of Eilon. This year, it is celebrating its 27th anniversary.The course hosts some 60 students, who come from all over the world to hone their art under the guidance of experienced tutors. The faculty, headed by Itzhak Rashkovsky of the London Royal College of Music, is a mixture of veteran Keshet Eilon teachers, such as Shmuel Ashkenasi, Ani Schnarch, Haim Taub, Eduard Grach, Rosa Fine, as well as those who come to teach at Eilon for the first time, such as American violinist Grigory Kalinovsky and violist Tatjana Masurenko of Germany. Two teachers are Keshet Eilon alumni – Sergei Ostrovsky and Vadim Gluzman, who are internationally acclaimed soloists and highly sought-after tutors.The course, which takes place between July 24 and August 10, culminates with a gala concert on August 9 at the Tel Aviv Performing Arts Center.The program features individual lessons, master classes, lectures and special events, such as a dedication to outstanding artists of the past. This year it will include violinist Mischa Elman, among others. Most of the course’s activities are open to the public. Some are free, while others have an admission fee.During the first years of the mastercourse, only the violin was taught. Later, the viola and cello were added. This year, two Israeli cello tutors, Hillel Zori and US-based Amit Peled – will teach at the course.Zori, who has been teaching cello at Keshet Eilon for about 10 years, says that the addition of these two instruments enriches the course and gives the participants an opportunity to play chamber music, which is very important for young musicians.“Improvement of my students’ performance skills and preparation of a new repertoire” is how Zori describes his tutorial functions.“Considering the students’ age, the most important thing is their passage from youth to maturity as musicians. Granted, music making as an occupation is a very beautiful thing, but professionalism is demanded here. It’s important to teach students how to work effectively, to not give up, to hear themselves as if somebody else were playing – that is, not to play for themselves but for the public,” he says.Zori explains that it takes time and effort to develop this important ability.“I think that playing slowly helps a lot. That is how you control both minor details and the intonation. Also, listening to recordings and performing the same piece by other musicians, especially outstanding ones, could be helpful. Of course, not in order to copy their achievements but to try to analyze their approach,” he says.The cellist has nothing but praise for the course in general.“Excellent faculty, talented students, concerts and other activities, high standards of everything, the dedicated staff – all of this is a winning combination. Over the years, Keshet Eilon has been on a steady upward path and brings fame to Israel at a time when our country is not so popular,” says Zori.For more information: www.keshetei.org.il; Tel: (04) 985- 8131/191