Tenerife, the largest of the Canary Islands, sounds too good to be true 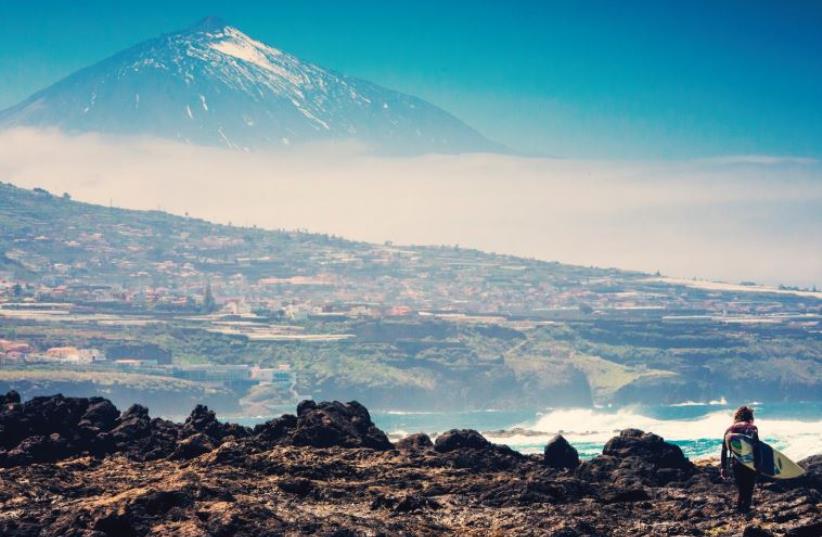 Tenerife Teide National Park
(photo credit: OPHIR TOURS)
Advertisement
The largest and most populated of the seven Canary Islands in Spain, Tenerife offers an endless array of vacation styles for all ages and interests, from party-loving youths, families and nature lovers to golfers and extreme sports enthusiasts. With Spanish cuisine and wine heritage that date back hundreds of years, as well as action-packed parks, every member of the family will find a lot to do there. The year-round perfect weather has made the island a favorite holiday destination for European and American travelers. While the island’s famous southern all- inclusive resorts offer white sandy beaches combined with endless clubbing, the northern part offers more traditional villages, smaller hotels and beautiful nature hikes. Tenerife is an island of extraordinary diversity, such as tropical forest walks; forays into volcanic lava; a carnival celebration that’s second only to Rio; the snow-draped Pico del Teide (Spain’s highest mountain and home to some of the most fabulous hiking in the country); great museums; and colonial towns. Don’t miss... Teide National Park: Located in the center of the island, it features the island’s most iconic landmark: Mount Teide. Whales and dolphins: The warm, crystal clear waters are home to some 400 short-finned pilot whales and many bottlenose dolphins. Auditorio de Tenerife Adán Martín: A stunning opera house and contemporary landmark in the city of Santa Cruz. Los Gigantes Cliffs: The 600-meter-high walls that drop down to the sea are one of the most photographed natural attractions on the island. Anaga Rural Park: It features laurel forests that have remained untouched for millions of years. Masca Gorge: A deep ravine well suited for adventure enthusiasts. Tenerife’s cities: The three largest cities on Tenerife are Santa Cruz, Puerto de la Cruz and San Cristobal de la Laguna. All three of- fer beautiful historical monuments, as well as boutiques and good restaurants. Facts at a glance Tenerife is the largest of the Canary Islands. It shares capital status with the island of Gran Canaria. It is located in the northeast of the Atlantic Ocean, just over 300 km. off the west coast of Africa. Tenerife is set in a subtropical climate zone, with pleasant spring temperatures all year round. The average annual temperature is 22º. Population: Approximately 906,850. Currency: Euro (a reduced tax of 5% applies). Official language: Spanish. (English is widely spoken in tourist areas.) Getting there from Israel Ophir Tours offers several packages for travelers going from Israel. As there are no direct flights to Tenerife, the flights are generally through Prague, Berlin or Madrid. For more information: www.ophirtours.co.il, 1-70 0 -70 0 -111.
■ The photos and information were provided by Ophir Tours.
Advertisement
Subscribe for our daily newsletter