A room with a (spectacular) view 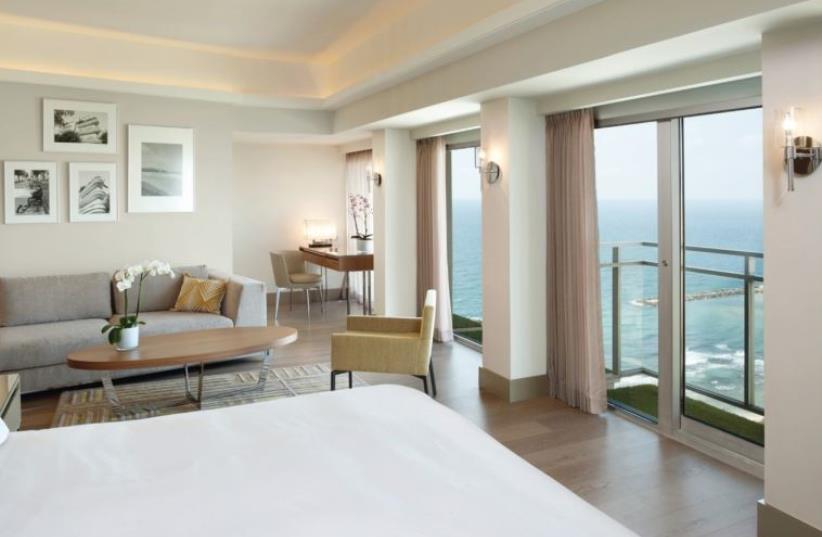 The Tel Aviv Hilton Hotel
(photo credit: PR)
Advertisement
Ladies and gentlemen, the sunset! I used to hear that call some years back on Tel Aviv’s Dolphinarium Beach, where every day one of the beach regulars would stand up with his back to the sea and shout it out as the sun dropped over the horizon and into the Mediterranean to the applause of onlookers.When I was invited to the Tel Aviv Hilton to review the hotel’s newly refurbished Grand Vista Floor, that was the first thing that sprang to mind. What would the greatest show on Earth look like from the 17th- floor lounge that overlooks the Tel Aviv beachfront? Take your pick. Watch it from a breezy balcony that juts out below the lounge so as not to disrupt the view from the lounge or look at it from the lounge itself in air-conditioned comfort from behind a long glass pane that adds a theatrical dimension to the spectacle.Arriving early evening, just in time for the show, we opted for the latter option and were not disappointed. It must be one of the best beach views in town. And from the comfort of your own table, first row, with a glass of wine, it doesn’t get any better.The lounge has its own buffet that serves refreshments, a light lunch and dinner, as well as breakfast. Guests can, of course, use the hotel’s dining rooms and restaurants, but once you’re up there you won’t want to leave.The refurbishment of the hotel’s 17th floor was overseen by Turkish architect Sinan Kafadar, who also designed the inte - rior of the Waldorf Astoria in Jerusalem. But he is perhaps best known for his rework of the Sultanahmet Prison, a Turkish neo-clas - sical building where Billy Hayes, the hero of Oliver Stone’s film Midnight Express, was held for a night after being caught trying to smuggle hash out of the country. Kafadar has given the Grand Vista Floor’s rooms and lounge a tasteful, luxurious but not ostenta - tious touch.We stayed in a spacious suite with a view to Tel Aviv and the beach looking south. The rooms on the Grand Vista Floor were decorated in neutral, relaxing tones. The bedroom had a queen-size bed, where you can sit up and watch the sunrise – if you’re up that early. Both the bedroom and the suite had large flat screen TVs, the mini- bar was fully stocked, and there was ample cupboard space. The bathroom, too, was spacious and was stocked with a gift box of toiletries by Israeli company Sabon. Service was excellent and unimposing.The pleasure doesn’t come cheap. A suite costs NIS 8,941 a night, and standard rooms on the Grand Vista Floor are NIS 3,721.

■ The writer was a guest of the hotel.
Advertisement
Subscribe for our daily newsletter