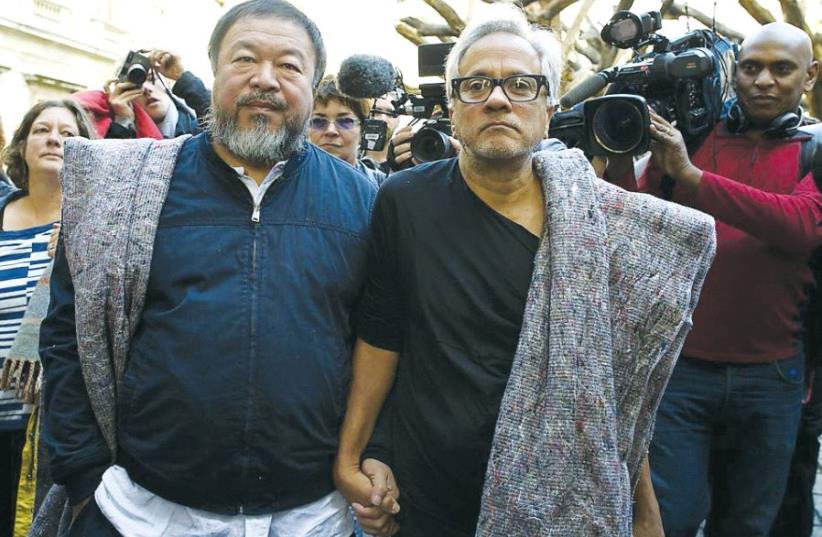 Artists Ai Weiwei (left) and Anish Kapoor carry blankets to symbolize the plight of refugees, as they walk through central London on September 17, 2015
(photo credit: GENESIS PRIZE FOUNDATION)
Advertisement
Sir Anish Kapoor was visibly moved by his visit to the Zaatari refugee camp in Jordan in November 2014. After talking about art to a large group of children in the camp, home to some 80,000 Syrian refugees, the prominent British sculptor and human rights activist asked how he could help them. The children suggested building a Syrian garden, to remind them of home. Kapoor proceeded to work with the children and make clay models of Syrian gardens, but upon his return home to the UK, he wondered how he could do something more meaningful.It’s a question Kapoor may be asking himself again after being selected on Monday as the winner of the milliondollar 2017 Genesis Prize.Beyond his immense contribution to the arts, Kapoor has a long history of social activism and a commitment to social justice, the Genesis Prize Foundation noted.“For many years, he has been a public advocate for the cause of refugees and an outspoken advocate for displaced people everywhere,” the foundation said in a statement issued Monday. “Recently, he visited Syrian refugees in the Zaatari refugee camp in Jordan, as part of UNICEF’s art therapy program, which is intended to help children who have witnessed atrocities to express themselves through art.”On September 17, 2015, to show solidarity with refugees around the world, Kapoor and Chinese dissident artist Ai Weiwei led a 13-km. walk from London’s Royal Academy of Arts at Piccadilly Circus to Kapoor’s Orbit sculpture in the Olympic Park at Stratford, which at 115 meters is the UK’s tallest piece of public art.“This is a walk of compassion,” Kapoor said at the time. “Peaceful. Quiet. Creative.”It was classic Kapoor. “Artists don’t make objects. Artists make mythologies,” he once said. His shiny sculptures not only mirror both their viewers and the cities in which they are located, they also reflect the topsy-turvy world we live in.His 500-cm., polished-steel hourglass, Turning the World Upside Down (2010), at the Israel Museum, is perhaps the best example of this, both reflecting and reversing the Jerusalem sky and the museum’s landscape, symbolizing the city’s duality of heavenly and earthly.“I was trying to bring the sky down to the level of earth,” he said, after the piece was commissioned by the museum as a tribute to legendary Jerusalem mayor Teddy Kollek.No cause resonates more with Kapoor than the plight of Syrian refugees, especially children. He said he would use the million-dollar award, and the global platform provided by the Genesis Prize, to raise awareness of the plight of refugees and try to expand the engagement of the Jewish community in a global effort to help alleviate the refugee crisis.“I am an artist, not a politician, and I feel I must speak out against indifference for the suffering of others. There are over 60 million refugees in the world today – whatever the geography of displacement the refugee’s crisis is right here on our doorstep,” he said. “I appeal to people of good conscience in the global Jewish community, and those outside it, who share this sentiment and cannot remain passive and silent, to join the call of the Genesis Prize, help save lives and give refugees an opportunity to return to normal life.”Kapoor said he was honored to be the recipient of the 2017 Genesis Prize. The award, he said, “has ambitions that are generous, openhearted and humane. It seeks to broaden the context of Jewish identity and calls upon Jews and non- Jews to work together to influence some of the big issues of our times.”Jewish identity and history have witnessed recurring conditions of indifference, persecution and the Holocaust, he said. “Repeatedly, we have had to repossess ourselves and reidentify our communities. As inheritors and carriers of Jewish values, it is unseemly, therefore, for us to ignore the plight of people who are persecuted, who have lost everything and had to flee as refugees in mortal danger. Outsider consciousness resides at the heart of Jewish identity, and this is what motivates me, while accepting the honor of the Genesis Prize, to re-gift the proceeds to refugee causes.”Waxing poetic, Kapoor added passionately: “To lose one’s home, one’s land, one’s sense of belonging, is bewildering. All that is left is one’s body. I ask: How long before – for so many – even that is lost? “Together with the support of the Genesis Prize, we have set ourselves a mission to work for refugee causes,” Kapoor said. “We have a duty to persuade our fellow citizens all over the world that those who are vulnerable are in need of our compassion and our empathy. Their well-being is our well-being; their desperation is ours. This is our message.” 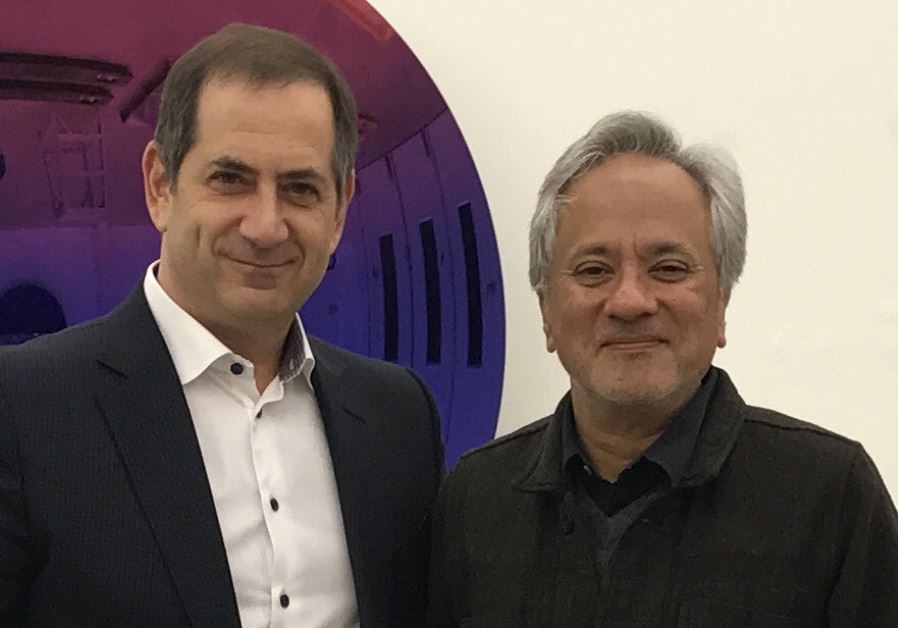 Genesis Prize Foundation chairman and co-founder Stan Polovets with Anish Kapoor. (Courtesy GPF)
The long road from Baghdad While the first three Genesis Prize laureates were all American Ashkenazi Jews from New York, Anish Kapoor represents a totally different demographic and shows the full diversity of the Jewish people. Kapoor’s Jewish mother immigrated to India from Baghdad as a child, while his father was a Punjabi Indian who served in the Indian Navy as a hydrographer. His maternal grandfather served as the cantor of the Iraqi synagogue in Pune.Kapoor grew up with an ingrained feeling of being an outsider and a special perception of his Jewish identity.“My parents were true cosmopolitans,” he said. “We grew up with Judaism as a cultural and family element, but not religious.”He was encouraged by his parents to explore the world – and himself. At the age of 16, he ventured into a world beyond India, making aliya and taking one of his younger brothers with him on a journey into the unknown and living on Kibbutz Gan Shmuel, east of Hadera, from 1971 to 1973. It was on this kibbutz, he said, “where I decided that I was going to be an artist.”After being rejected by the Bezalel Academy of Arts and Design in Jerusalem, he moved to London in 1973 to study art, and has lived and worked there ever since. He studied at the Hornsey College of Art and the Chelsea College of Arts.Kapoor has a son and a daughter with his former wife, German-born art historian Susanne Spicale. He recently married Sophie Walker, a garden designer who received a commission to design a public memorial garden in memory of the great human rights activist Helen Bamber. Kapoor’s brother, Prof. Ilan Kapoor, is a Canadian scholar at Toronto’s York University, specializing in critical development studies and postcolonial politics.Kapoor was knighted by Queen Elizabeth II in 2013. His other civilian honors include the Padma Bhushan from India (2012), the Ordre des Arts et des Lettres from France (2011), and the Commander of the Order of the British Empire (2003). He was awarded an honorary fellowship by the Royal Institute of British Architects in London in 2001, and honorary fellowships at the University of Wolverhampton (1999), the London Institute (1997) and the University of Leeds (1997). 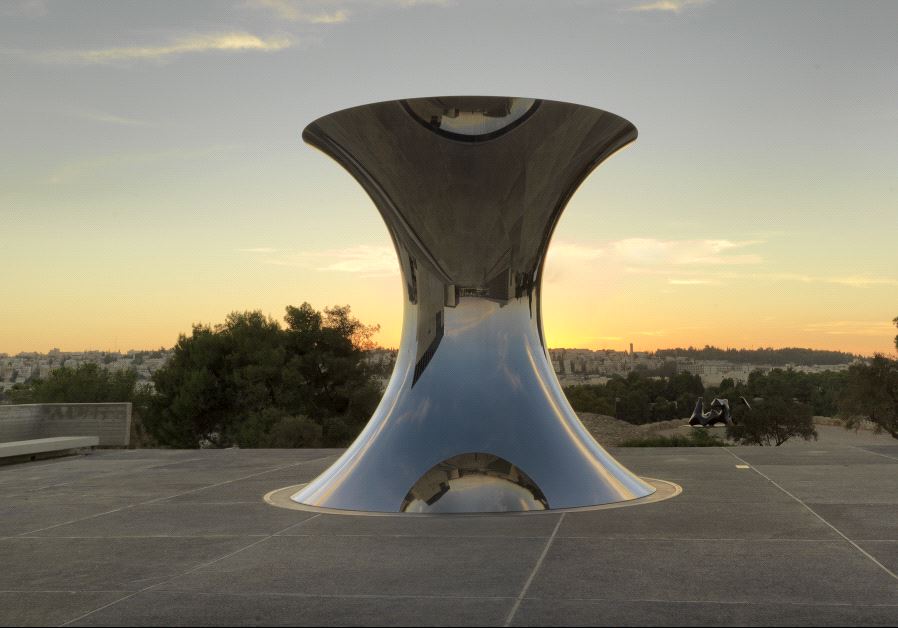