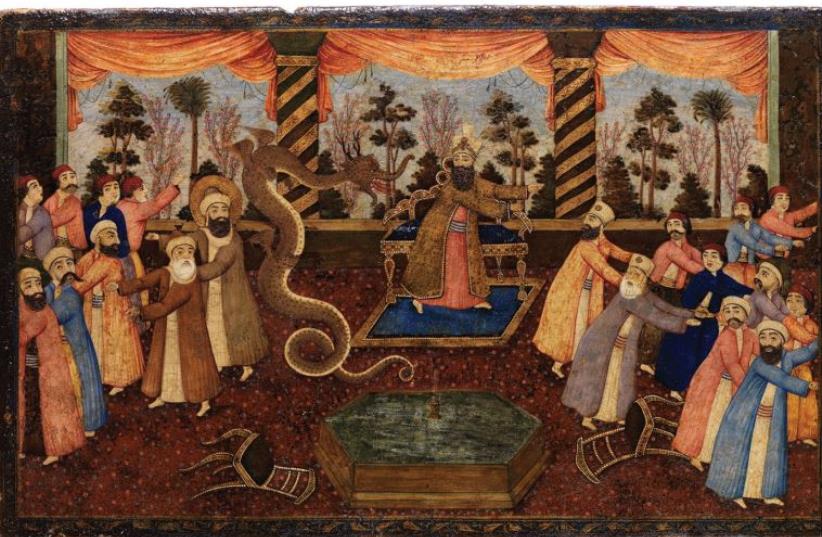 Passover-related exhibition
(photo credit: PR)
Advertisement
When it comes to marketing ruses, the Hagadda compilers - whoever they may be - stole a march on contemporary PR professionals.Many a marketing executive, image consultant or whatever buzzword epithet you care to attach to someone who earns their crust getting the public to buy into - and buy - an age-old product, constantly wracks their brain in an effort to proffer the item in question in an entirely new light.The idea is to dupe the consumer into believing they are getting something new and eminently better for their hard-earned dineros.We are advised in the Haggada that we are duty bound not just to recount the story of the Exodus of the Canaan-bound Israelites, over three millennia ago, but to relate to the account in an almost interactive way, and see ourselves as coming out of Egypt “in real time,” as it were. That, surely, is tailor-made to obviate any mothballs that may have insinuated themselves into the fabric of the, by now, almost instantly recognizable text.The Israel Museum has -pardon the pun - clearly taken a leaf out of that promotional book and has lined up three Passover-related exhibitions that offer the visitor sumptuous aesthetics, intriguing storylines and plenty of twists and turns along the way. The Leaving Egypt - Illuminating the Exodus in Hebrew Manuscripts display, curated by Anna Nizza Caplan, comprises some lavishly decorated manuscripts from the museum’s collections, primarily haggadot, dating from the 13th to the 18th centuries. Except for one manuscript which originates in Iran, all were produced in Europe.Displaying a variety styles, the illustrations reflect the period in which they were made, at times drawing a fascinating parallel between the Israelites’ bondage in Egypt and the contemporary reality of the artists who created them.The oldest tome in the venerable lineup is the Birds’ Head Haggada, which was produced in Southern Germany around 1300. Not too much is known about it, and the scribe is only known by his given name of Menachem. The Sasoon Haggada comes a close second in the seniority stakes, dating to around 1320 and originating in Spain or Southern France. It is a top-of-the-range item with rich decorative augmentation that incorporates gold and silver leaf.The newest item in the show is a Haggada from Bordeaux, France, which dates from 1813 and includes a French translation and footnotes in Ladino.“It is fascinating to see that people have been reading the same texts as we read today for 500 or 600 years,” notes Caplan.There are even some documentary images in some of the haggadot with, for example, an illustration showing a family seated around the Seder table, which gives us some idea of what the well-dressed Jew wore all those centuries ago.The Second Exodus – Jewish Ceremonial Objects from Egypt exhibition, curated by Rachel Sarfati, is a curious affair. It incorporates a variety of decorative mindsets, and not a few intriguing subtexts. The artifacts in the collection hail from Egypt and shed a little light on life in the Jewish community there in the 20th century. The vast majority of Jews were forced to flee Egypt in the 1950s, after the rise to power of Gamel Abdel Nasser. The exhibition includes parochot – Holy Ark curtains – Torah scrolls in delicately fashioned metal cases, including one for a pint-sized children’s version, and ornamental finials.The lineup also features some illuminating documents, such as a photograph of Rabbi Nahoum Effendi, the chief rabbi of Egypt, who died in 1960. Sarfati augmented the Effendi shot with a notebook containing several Torah commentaries and some eulogies, in Hebrew, Arabic and French. The content was created in relation to Rabbi Effendi’s burial service. The chief rabbi also appears in a group shot of the Maslaton family, taken on the occasion of Yehuda Maslaton’s Bar Mitzvah. The exhibition also features a documentary called Starting Over Again – An Egyptian-Jewish Story, in which members of the community talk about their life in Egypt and about the trauma of their abrupt departure.How the collection, most of which originates from the Hanan synagogue in Cairo, reached the museum also makes for fascinating listening. In 1991, during the First Gulf War, when Scud missiles were being fired over here, an elderly gentleman by the name of Yitzhak Yedid contacted the Israel Museum.Yedid asked the museum to assume responsibility for the Judaica items in his Ramat Gan apartment, which added up to a small synagogue.Yedid died in 1996 and, according to the terms of his will, all the artifacts were entrusted to the Israel Museum.The design, style and motifs of the objects tell the story of the Egyptian Jewish community, which knew some glorious times over the centuries, before the second enforced exodus.The last of the exhibition triad, Musa in Egypt: Islamic Depictions of the Prophet Moses, adds yet another surprising facet to the traditional Passover story as related through the generations. The stories of the Bible were known to the inhabitants of the Arabian Peninsula even before the advent of Islam. Many of them appear in the Koran, and Moses – or Musa – is revered by Muslims as a prophet and, in fact, is mentioned in Koran more than any other individual.The works of art in the Musa in Egypt exhibition, curated by Naama Brosh, make for fascinating and engaging viewing. Similar to the circular halo that appears in Christian Medieval art, signifying a hallowed individual, the pictures in the exhibition depict Moses with a flame-like addendum to his head, which is reminiscent of Buddhist art.Some of the paintings show miracles Moses performed prior to the Exodus, such as turning his staff into a serpent or, as the exhibition works have it, a dragon-like creature.In one picture, the Buddha-like halo echoes the flames raging outside, as Moses’ mother considers how to save her baby’s life. The splitting of the Red Sea, and the demise of much of Pharaoh’s army, is illustrated in highly animated fashion, while several baddies – namely Og and Korach – are shown getting their comeuppance.The three Passover exhibitions are as entertaining as they are instructive.For more information: http://www.imj.org.il/