“It was really hard to choreograph at the same time as I was working with Yasmeen. She is the most demanding choreographer I have ever worked with and I say that in a very positive way. 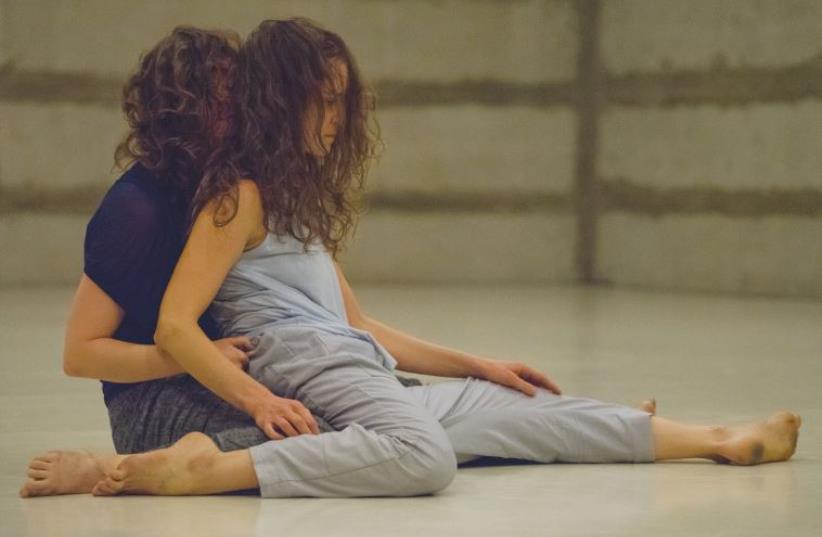 AYALA FRENKEL (left) and Noa Shavit perform in the new duet ‘2 Her.’
(photo credit: Courtesy)
Advertisement
If in her previous works Ayala Frenkel presented an image of herself, in her new duet 2 Her she exposes the real thing. The up-and-coming choreographer, who struck out on her own creative path just a couple of years ago, has already managed to strike a chord all her own, one that resonates with feminist subversion and boundary breaking. In her two previous solos, both of which she performed, Frenkel battled with the notion of the contemporary female. 2 Her raises the ante to include another presence, that of veteran dancer Noa Shavit.“Everything fell into place the minute that Noa joined me,” smiles Frenkel over juice and pastries at Loveat in central Tel Aviv. “I had been working for several months in a kind of a spiral, going around and around but not really touching on the essence of what I wanted to talk about. Things weren’t exactly coming together as I hoped they would. I was making progress in my research and ... Noa’s presence snapped things into focus.”Frenkel adds that working with Shavit was a longtime dream. Nearly 10 years ago and at the start of her dance career, Frenkel worked with Haifa-based choreographer Michael Miller. One day, Miller invited the dancers over to his house and, at some point, put on a video of Emmanuel Gat’s K626.“That was the first time I saw the creature that is Noa. She was such an inspiration. I really never dreamed that she would agree to work with me but when I asked, she immediately opened her calendar and asked when we’d start,” says Frenkel.The duet, which will premiere as part of the annual Dance Arena Festival at Hazira Performance Art Arena, pushed Frenkel to deepen and clarify her choreographic practice. This is Frenkel’s third time in three years participating in Dance Arena. The first time, she was a collaborating performer in Gil Kerer’s Between Us. Last year, artistic director Sahar Azimi invited her back to create her own work, a solo called GAZELLE. This year, Azimi once again gave Frenkel a free hand to bring her inner visions to the stage.“My first piece, GAZELLE, I made as a kind of purging. It just erupted out of me. And then I made another solo, which also came from personal impulses. The first solo has a mask and the second a wig. This work, 2 Her, is the real thing. There are no masks in this work, nothing to hide behind.”2 Her explores the many contradictions of feminine behavior and relationships.Frenkel and Shavit are at once soft and tough, violent and restrained, together and apart.“I thought a lot about what it means to be a woman in this super-male society. I wanted to present a type of utopia, an alternative to how we see and relate to women. And I came to realize that what that means is that women can be everything at once. We can embody many different qualities and feel whole with that, we don’t have to choose.”In the various showings that Dance Arena hosted, Frenkel received a smattering of feedback. Some saw two wonder women, others a meeting of two lovers.“People have told me that there is an erotic element to the piece and I am fine with that. It wasn’t our intention but I think that presenting a romantic relationship between women on stage is something that almost never happens in dance, especially here, and it deserves a place on the stage. There are very intimate moments but there is also a very tangible distance between us, an empty space. We exist in the same space, we are human and not.There is something very spiritual or metaphysical for me about the meeting of our two beings, something that goes beyond the two of us as performers in a dance work.”The entire creative process of 2 Her took place concurrently with Yasmeen Godder’s creation of Common Emotions, which both Frenkel and her husband Ofir Yudilevich perform in.“It was really hard to choreograph at the same time as I was working with Yasmeen. She is the most demanding choreographer I have ever worked with and I say that in a very positive way.She has such immense knowledge and such a clear aesthetic. I learned so much about what it means to create and to manage a cast of dancers from her. Some days, I would work with Yasmeen from nine to five and then continue into the late evening on my work. I had to find ways of releasing the energy of her rehearsals in order to get into my own mind, my own movement,” explains Frenkel.And if all of this wasn’t enough to fill the day, Frenkel also continued to pursue a bachelor’s in art and philosophy at the Open University.The Dance Arena Festival will take place at Beit Masie in Jerusalem on July 13 and 14. For more information, visit: www.hazira.org.il