All is laid bare at Jerusalem Film Festival’s opening night

Did you know that West Side Story was a childhood favorite of Jerusalem Mayor Nir Barkat? 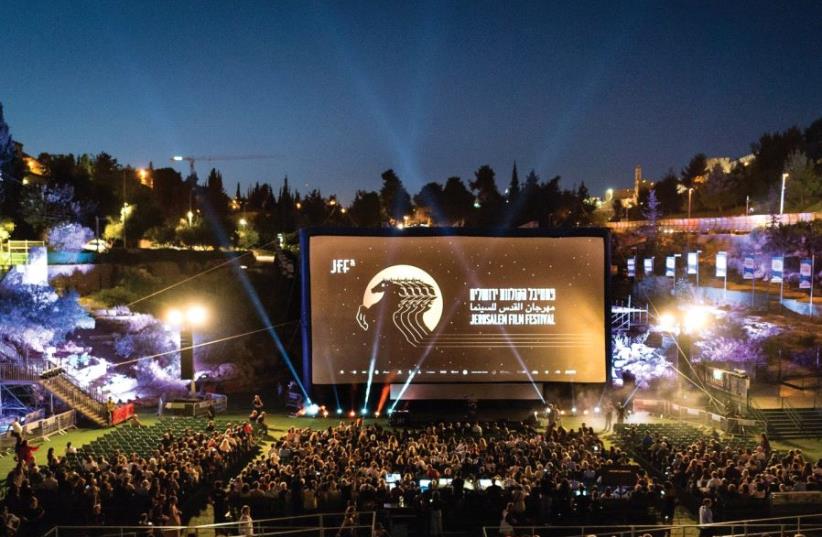 OPENING NIGHT of the 34th Jerusalem Film Festival at Sultan’s Pool amphitheater
(photo credit: DOR KEDMI)
Advertisement
As Michel Hazanavicius’ Redoubtable played Thursday night on the huge screen at the Sultan’s Pool amphitheater to open the 34th Jerusalem Film Festival, cars honked on the nearby streets.The many scenes of full frontal nudity, mainly by lead actress Stacy Martin but also with the film’s star, Louis Garrel – the two play director Jean-Luc Godard and his actress wife Anne Wiazemsky in this film based on their life – which were clearly visible to passersby and passing drivers, may have had something to do with that. This is not the first time that there has been an opening-night film with nudity, but I can’t remember one that had so much since Pedro Almodovar’s Talk to Her in 2002.The movie certainly grabbed the attention of many Jerusalemites, and the festival audience enjoyed the presence of Garrel and the film’s Oscar-winning director Hazanavicius. They lent some star power to a warm evening where movie lovers from all over Israel came to celebrate this festival, which runs at the Jerusalem Cinematheque (with some screenings at the newly reopened Lev Smadar and Yes Planet) until July 23.In an opening ceremony hosted by one of Israel’s premiere actors, Lior Askhenazi, a short film was shown that featured those responsible for funding and sponsoring the festival talking about their love for movies. This film opened with a message from President Reuven Rivlin and his wife, Nechama, who spoke about the importance of the festival, and how much they have enjoyed it over the years, noting it was where they first saw movies by directors from Thailand and Korea “whose names we couldn’t pronounce but whose movies we came to love.” Jerusalem Mayor Nir Barkat revealed that his favorite film as a child was West Side Story, a movie that combines music, romance and gang warfare and is a fitting choice for a man who is now the leader of Israel’s celebrated and sometimes turbulent capital.Minister of Jerusalem Affairs Ze’ev Elkin also picked a foreign film as his favorite, the epic adventure 20,000 Leagues Under the Sea. The president of the Jerusalem Foundation, Johanna Arbib-Perugia, chose an Israel- themed classic, Exodus, the Hollywood extravaganza with Paul Newman about the illegal immigration to Palestine following the Second World War.Controversial Culture and Sports Minister Miri Regev, who has railed against what she sees as elitist and left-wing movie-makers and threatened to cut funding to the film industry, did not attend the opening. But she was booed, as she always is when she appears, as she talked in the short film about her favorite movie, the Israeli classic Operation Thunderbolt, about the Entebbe rescue.Ashkenazi showed a clip from a different Israeli classic, Siege, Gilberto Tofano’s 1969 drama about a war widow played by Gila Almagor, that has been digitally restored by Jerusalem Cinematheque-Israel Film Archive, in partnership with United King Films and with support from the Rabinovich Foundation, which will be shown in a festive screening on Wednesday. The clip showed Almagor at her most glamorous, as she roamed surprisingly groovy-looking Tel Aviv streets.This led into a peek at the Israel Film Archives Digitalization and Restoration project, which has taken on the ambitious task of preserving 120 years of Israeli film history. This project was highlighted with a very entertaining newsreel clip from the archives about Israeli movie-going in the Sixties, which featured an explanation of how theater owners received a tiny sum from each ticket – just four agorot.Mayor Barkat and the executive director of the film festival and the CEO of the cinematheque, Dr. Noa Regev, presented Hazanavicius with an award for his contribution to the festival. Hazanavicius said he was “proud and honored” to have his film open the festival and managed to say “pleasant viewing” in Hebrew.Garrel also addressed the crowd, displaying an appreciation for the Israeli film scene when he said, “I hope you will not like the movie the way you like Miri Regev.”He had nothing to worry about. The audience ignored the honking and sat rapt as the cinema wove its magic spell over the city, just the way the festival and cinematheque founder Lia van Leer intended. Her spirit is always on stage at the opening.For many years, as per van Leer’s plan, the festival had awards only for Israeli movies, since she conceived it as a place where Israeli cinema could receive international attention. The Haggiag Family Awards for Best Full-Length Israeli Feature Competition is undoubtedly the most anticipated category in the festival, and previous winners, such as Ajami, have gone on to get Oscar nods and worldwide acclaim.Dana Goldberg and Efrat Mishori’s Death of a Poetess, the first film in the competition, which I have not yet been able to see, is getting a lot of buzz for the great performances from its actresses, Evgenia Dodina and Samira Saraya. Shady Srour’s irreverent political comedy Holy Air, about life in Nazareth, was the rarest kind of a movie at a film festival, in that it explored serious themes in a way that was actually funny. Director/writer/ star Srour, who said he worked on the movie for over a decade, enjoyed a beer (or two) afterwards with the cast and crew, including his glamorous co-star, French actress Laetitia Eido.There are five more features to go in the Haggiag – and about 160 movies left to unspool in the festival overall – but I wouldn’t be surprised to see Poetess and Air nabbing a few prizes.