The 33 tanks include many species such as stingrays, clownfish, sea urchins, and sharks. 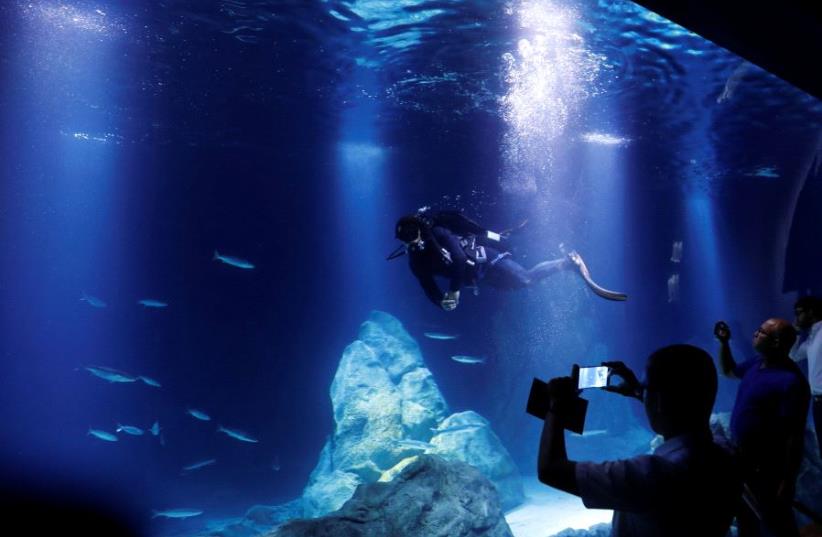 A marine biologist scuba-dives as he checks a fish display tank during the inauguration ceremony of an aquarium built adjacent to the Biblical Zoo in Jerusalem
(photo credit: RONEN ZVULUN/REUTERS)
Advertisement
Jerusalem's Biblical Zoo inaugurated the city's first aquarium, displaying hundreds of species of fish from the Mediterranean and the Red Sea.After eight years of construction and a total investment of one hundred million shekels, the 7,000 square-meter aquarium opened to the media on Monday and is due to open to the public in a few weeks.
Israel"s first aquarium is inaugurated at the Biblical Zoo in Jerusalem
The aquarium, which has been built next to the zoo, includes 33 tanks containing many diverse species such as stingrays, clownfish, sea urchins, and sharks.One of the aims of the aquarium, other than making it a popular tourist attraction, will be to help raise public awareness for the preservation of marine habitats."I hope that with opening the aquarium we will promote the awareness, we will promote education with the young generation but not only with the young generation to do more to save the sea's inhabitants," said Shai Doron, the zoo's director.