University of Haifa archaeologists find bones crushed under a collapsed roof, a dove-shaped gold pendant and catapult ammunition at site near Lake Kinneret.

By JPOST.COM STAFF
SEPTEMBER 29, 2014 12:14
University of Haifa dig uncovers marble leg
Advertisement
University of Haifa archeologists recently discovered items which have shed light on an earthquake that occurred in 363 CE in the ancient city of Hippos that overlooks Lake Kinneret.Hippos, near modern-day Kibbutz Ein Gev overlooking the lake (the Sea of Galilee), was the site of a Greco-Roman city-state. It is just on the Israeli side of the 1949 armistice line with Syria. Susita Mountain, on which Hippos was built, is between the Kinneret Valley and the southwestern Golan mountain range, about 2 kilometers east of the lake and rising 350 meters above it. Hippos was part of the Decapolis, Ten Cities that were culturally tied more closely to Greece and Rome than to the otherwise Semitic region.Archeologists digging at the excavation site, founded as Antioch of Hippos by Seleucid settlers and known as Susita in Hebrew, uncovered a woman’s skeleton and a gold dove-shaped pendant under the tiles of a collapsed roof. In addition, they found the marble leg of a statue and artillery from some 2,000 years ago.“Finally the findings are coming together to form a clear historical-archeological picture,” Dr. Michael Eisenberg, the head of the excavation, said on Monday.The excavation has been ongoing for 15 years. Hippos, which was founded in the second century BCE, was the site of two large, well-documented earthquakes. The first, in 363 CE, caused great damage but the city recovered. The second earthquake, in 749 CE, destroyed the city which was then abandoned, never to recover.Gold pendant in shape of dove.(photo credit: DR. MICHAEL EISENBERG)Evidence of the 363 CE earthquake’s destruction was uncovered during digging last year, however none as significant as the new discoveries, according to archeologists.In the northern section of the basilica, the largest structure in the city, which served as its marketplace, the archeologists, led by Haim Skolnik, discovered the remains of a number of skeletons that were crushed under the roof that collapsed. Among the bones of one of the women killed in the collapse, they found the dove-shaped pendant.Dig participants with marble leg .(photo credit: DR. MICHAEL EISENBERG)
For the first time, evidence was uncovered that the 363 earthquake destroyed the Roman baths, which, like the basilica, were not rebuilt.According to Eisenberg, the findings show that the first earthquake was so powerful it completely destroyed the city, and rebuilding took some 20 years.Dig site.(photo credit: DR. MICHAEL EISENBERG)
The marble leg that was discovered was part of a sculpture at the Roman baths. “It is too early to determine who the man depicted in the sculpture was. It could be a god or athlete whose sculpture was over 2-meters tall. We hope to find further pieces of the sculpture in the coming seasons that will shed light on his identity,” Eisenberg said. 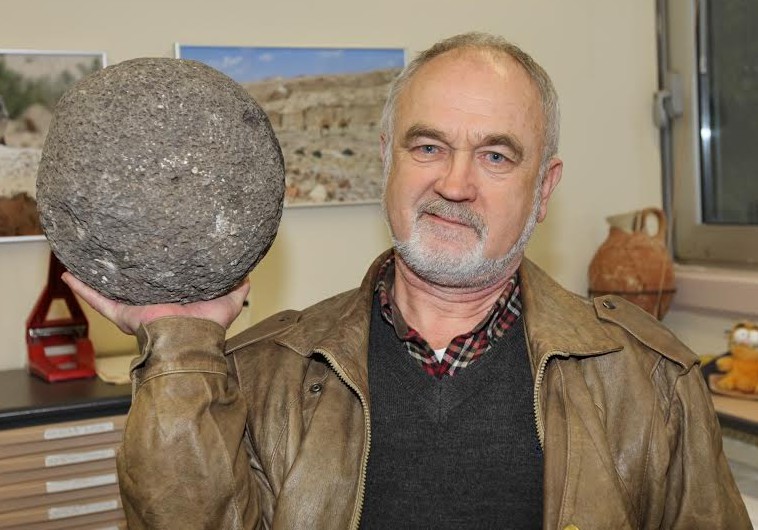 Stone projectile used by ancient catapults.(photo credit: DR. MICHAEL EISENBERG)At the bastion, the city’s main defense post during the Roman period, archeologists uncovered a fortified space for a catapult that appears to have been some 8-meters long. Archeologist have found a number of stone cannonballs that fit the massive catapult, as well as smaller stones for smaller launchers. The catapult was capable of firing cannonballs as far as 350 meters.
Advertisement
Subscribe for our daily newsletter