Program for talented youth has turned out over 40,000 grads, a figure it thought would take 2 decades. 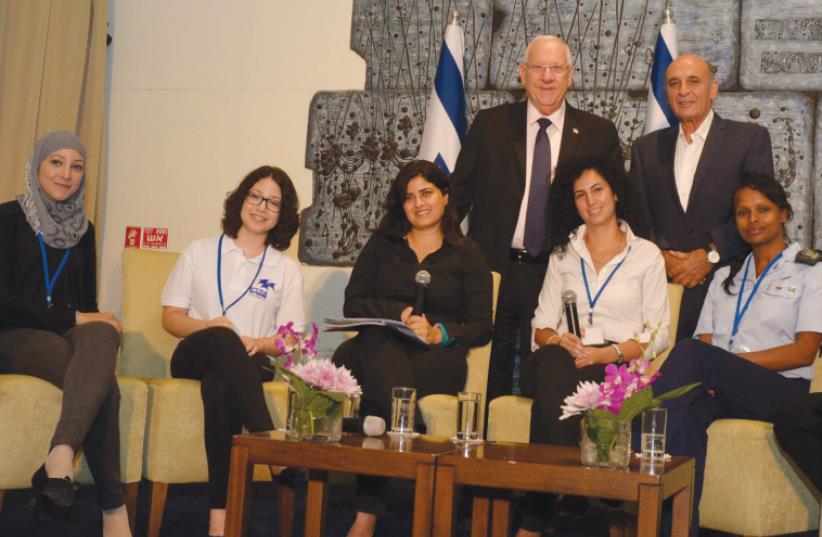 PRESIDENT REUVEN RIVLIN and former IDF chief of staff Shaul Mofaz (standing) join participants of the Atidim program during a celebration of the organization’s 15th anniversary yesterday at the President’s Residence in Jerusalem.
(photo credit: HAIM ZACH/GPO)
Advertisement
During his tenure as Israel Defense Forces (IDF) Chief of General Staff, Shaul Mofaz became aware of the scarcity of technology specialists in the IDF and conceived the idea of recruiting talented young people and sponsoring their education in different areas of science and technology.With the financial backing of industrialists such as Eitan Wertheimer and Benny Landa, the project became a reality in 1999. Other individuals, business enterprises and organizations – including the Jewish Agency and Bank Leumi – soon joined in.When the Atidim program was first launched, the aim was to have 40,000 alumni by the year 2020, Mofaz said at a review ceremony on Monday at the President’s Residence celebrating the program’s 15th anniversary. “But we’re already there,” he declared with pride, adding that “these are future leaders in every field.”Atidim Director General Zeev Hayut said that Atidim’s mission is to give equal opportunities to young people from all strata of Israeli society, but particularly those living in peripheral areas. They are encouraged to complete their high school studies and to pass bagrut, and after completing their army service to go on to higher education.Aviv Azran from Katzrin, is studying electrical engineering at the Haifa Technion, and said that he had initially encountered Atidim when he was a high school student.When he was 25, he met a representative of the program, “and it changed my life,” he said, emphatically. “I learned to know myself and what I should do.” Expectations in the periphery are different to those in the center of the country, he explained, adding that “In the periphery you don’t really expect to amount to anything.”First Lt. Hadas Malada Mizri, who came to Israel from Ethiopia as part of Operation Solomon at the age of four, barely survived the journey to Israel.She was so impressed with the medical treatment that she received that she told her mother that when she grows up she wants to be a doctor and help other children. Her dream came true when she became the first woman from Israel’s Ethiopian community to serve as a physician in the IDF. Concerned by the aura of hopelessness that pervades Ethiopian neighborhoods throughout the country, Mizri travels the length and breadth of Israel telling youngsters to follow her example.Food engineer Fatma Dahla graduated from the Haifa Technion with the help of Atidim.She says that there was some effort in her village to dissuade her from studying, because Arab women are supposed to stay at home, get married and have babies, but once it became clear that she really wanted to study she received encouragement and support from her community.Yehuda Morgenstein who has a B.Sc in industrial engineering, said that it had initially been difficult for him as a haredi student at the Technion.He recalled that the first time that he entered the cafeteria, someone said to him: “The kashrut supervisor has already been here.” Despite haredi leaders’ misgivings about university education, however, Morgenstein, said that he was exactly the same when he walked out as when he walked in, except for the fact that he walked out with a BSc. He said that what was more important than the number of people with kippot entering the Technion was how many people with kippot left with a degree.President Reuven Rivlin emphasized the importance of reducing the gap in social and economic achievements between the periphery and the center of the country. Bureaucracy often creates needless obstacles in narrowing the gap between the two, he pointed out. The president proposed that affirmative action or reverse discrimination legislation be enacted so that different sectors from the periphery could be assured of being treated equally on the basis of their merits and not their specific backgrounds.