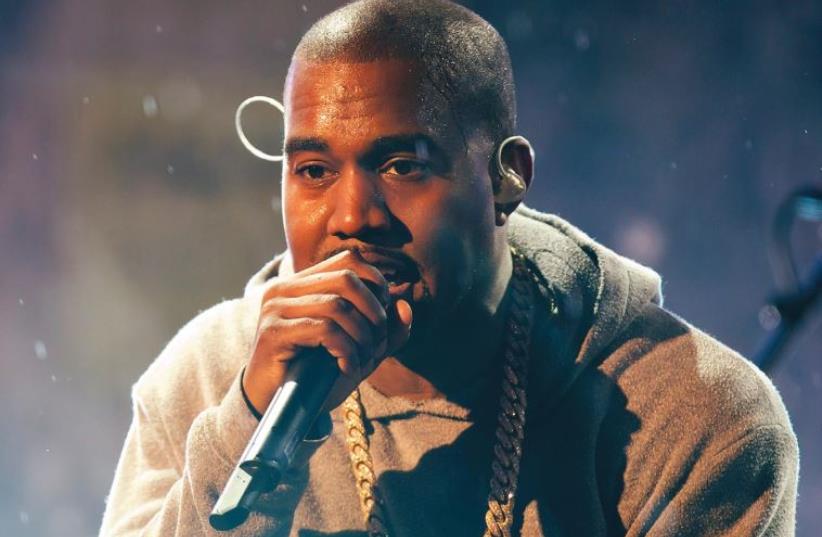 Kanye West
(photo credit: PR)
Advertisement
FILM 1 AN AMERICAN AND A RUSSIAN The Man from U.N.C.L.E., Guy Ritchie’s new adaptation of the popular 1960s TV series, takes place at the height of the Cold War and focuses on CIA agent Napoleon Solo and KGB agent Ilya Kuryakin.The two reluctantly join forces to stop an international criminal organization from destabilizing the world with nuclear weapons. Their main hope rests on a German scientist’s daughter. With Henry Cavill, Armie Hammer, Hugh Grant.DANCE 2 AN ORIGINAL BENT L’après-midi will be premiered in Israel by German choreographer Raimund Hoghe.One of the most influential dancers working today, Hoghe is a prime representative of the minimalist European dance method.He has kyphosis, which is not a common condition for the average dancer, but he highlights his hunched back through his dance in an original way.Wednesday and Thursday at 9 p.m. at the Suzanne Dellal Center, Tel Aviv. For tickets, call (03) 510-5656.3 SHOOTING FROM THE HIP Cowboy, a new piece by Niv Sheinfeld and Oren Laor, reacts to a reality of capitalism, violence on the rise and the annulment of the self. Cowboy is about the ideals we fight for and the search for an alternative to the power games controlling our cultural landscape. The couple has been creating dance performances together for the past 10 years.Thursday, Friday and Saturday at 8 p.m. at the Tmuna Theater, Tel Aviv. For tickets and more information, call (03) 562-9462.MUSIC4 JEWISH SOULZusha is a Hassidic soul band made up of Shlomo, Elisha and Zachariah. Their self-titled debut EP reached No. 9 on Billboard’s world music chart, and the group has played to sold-out audiences in New York, Chicago, San Francisco and Jerusalem. While borrowing lines from ancient liturgy, Zusha’s music is a blend of jazz, reggae, folk, ska, Gypsy swing and traditional Jewish soul.Saturday at 10 p.m. at the Yellow Submarine, Jerusalem. For tickets, call (02) 679- 4040; www.yellowsubmarine.org.il.5 SACRED SOUNDS The Jerusalem Sacred Music Festival will celebrate its fourth anniversary with six days of 25 performances by musicians from 16 countries. At five locations across Jerusalem, including the Old City, the festival will offer performances from Ethiopia’s dance floors (Ethiocolor), American blues lands (Correy Harris), Jamaica’s garage reggae music (Max Romeo) and much more.Sunday (August 30) through Saturday (September 4) at various venues in Jerusalem. For tickets and more information, call (02) 653-5854; www.jerusalemseason.com.6 GREEK IN THE GOLAN The Golan Moon Nights Festival features Yehuda Poliker in an evening filled with sound and rhythm, weaving Greek, Balkan and Mediterranean, along with rock numbers. Poliker is renowned for his combinations of guitars and bouzouki, rock ’n’ roll and Greek music. Guest Riki Gal will perform songs from her new album, produced by Poliker.Thursday at 9 p.m. at the Amphi Park Golan, Neot Golan. For tickets, call *9066; www.eventim.co.il.ART 7 MODES OF ARTThis year’s Jerusalem Artists’ House exhibition features three artists: Noa Brezner (photography), Hadassa Goldvicht (installation and video) and Netanel Morhan (painting). Their oeuvres range from personal-biographic, to social-political and the concrete here and now in a surrealistic fashion. Curator: Yael Ruhman.Opens Saturday at noon. Until October 24. The Artists’ House, Jerusalem. For more information, visit www.art.org.il.MIXED BAG 8 THROWING A COLOR PARTY Life in Color is the largest color festival in the world. It was initiated in Florida in 2006 by four students after witnessing party-goers throwing paint on each other’s white shirts. Today, the festival uses paint cannons, operated by professional stuntmen. Nicky Romero, Carnage and Borgor DJs will be the main headliners.The eco-friendly paint washes out with water.Thursday at 9 p.m. at Hadera Nahal Park. For tickets, see www.lifeincolor.co.il.9 BEER AND BRANDS The Beer City Festival will hold beer tastings, a string of musical performances and other attractions. The festival, hosted by Goldstar and the Haifa Municipality, will feature a beer garden, a boulevard of food stalls, and performances by Hadag Nahash and Hatikva 6. There will also be a collection of men’s fashion that includes T-shirts, hats, undershirts and more.Thursday at 8 p.m. at the Ethos Courts (in front of the International Convention Center), Haifa. For more information, call (03) 718-8555.10 UPCOMING MUSIC WEST COMES EAST Kanye West, one of the biggest hip-hop musicians and icons of this generation, will perform in Israel in September. A visual artist, producer, songwriter and fashion designer, West was named by Time magazine as one of the 100 most influential persons of 2015. To date, West has sold more than 35 million albums and 100 million digital songs.September 30 at 8 p.m. at the Ramat Gan Stadium. For tickets, call *2207; www.2207.co.il.