Our top picks on things to do this weekend. 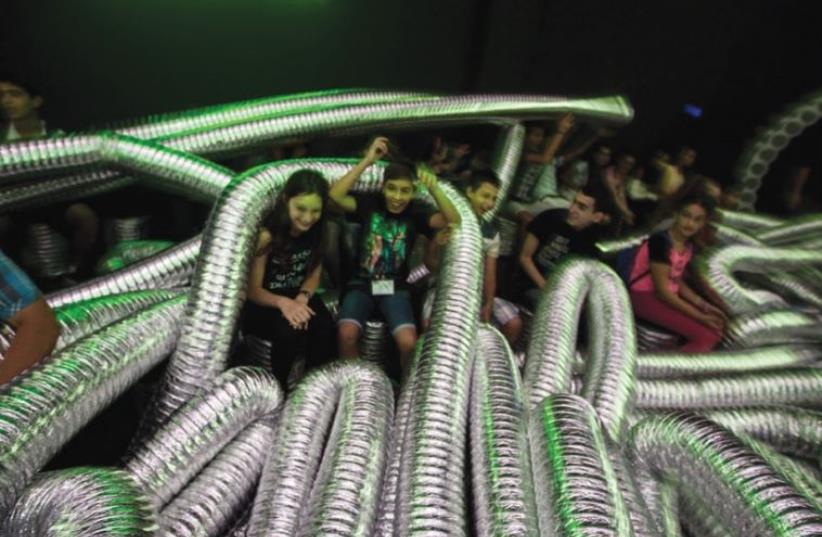 "Tubix" show at The Madatech Museum
(photo credit: PR)
Advertisement
FILM 1 CINDERELLA AND THE BIG CITY Kate’s dream in After the Ball is to become a fashion designer at one of the biggest fashion houses in America. Despite her talent for designing, no couture house is willing to hire her because of her father, who is known as a “borrower” of other companies’ fashion designs. Her last resort is to work for her father alongside his evil wife and her two stepsisters.

DANCE2 BLACK PEARLPearl , the debut work by choreographer Sallie Anne Friedland, presents three dancers in a black box. Being confined within three black walls and a black floor dictates minimalist movement expression. The black space, along with the music and lighting, creates a work with no plot, just three dancers who make their movements a plot of their own.Saturday at 10 p.m. at the Suzanne Dellal Center, Tel Aviv. For tickets and more information, call (03) 510-5656.MUSIC

3 RAP CITY The City is a rap opera written entirely in rhyme, performed as one continuous song. The opera combines rap, hip hop and spoken word with theatrical and poetic texts. Inspired by black music, film noir and detective films, the plot centers on the character of Joe, who one stormy night decides to take the case of a young woman trying to find her sister.Tuesday at 9 p.m. at Tzavta 1 in Tel Aviv. For tickets, call (03) 695-0156/7. Wednesday at 8:30 p.m. at Beit Mazia LeTe’atron in Jerusalem. For tickets, call (02) 654-3004.4 LATIN TIME During the summer, the Jerusalem Mu- nicipality is holding five big music concerts in Safra Square. This week features Jerusalem flamenco ensemble Remangar, along with singer-songwriter Shlomo Ydov in a performance that includes South American music and dance. Open to the public.

Thursday at 9 p.m. at Safra Sq., Jerusalem Municipality. For more information: www.jerusalem.muni.il; 106; (02) 629-6666/7777.5 ART ALL NIGHT LONG Contact Point returns to the Israel Museum for an entire night of art and people. Dozens of artists will take over the museum, giving their reactions to the works displayed there. The many activities include a headphones dance party, a robot with horns, a jogging group, auctioning of art implements, live music, lectures, collage works, taking photos and more.Thursday from 8 p.m. to 3 a.m. at the Israel Museum, Jerusalem. For more infor- mation: (02) 670-8935; www.imj.org.il/contactpoint.

MIXED 6 BAG GRAND OUTDOOR MARKETA huge night market will be set up in the center of Jerusalem. It will include hundreds of art stalls with designers, jewelers, sculptors, painters and more. The streets will be filled with theatrical attractions such as mimes, human statues, street musicians, art displays and workshops that will give visitors a unique strolling-shopping experience.

Every Thursday in August from the afternoon until 11 p.m. between Zion Square and Shlomzion Hamalka Street and along Jaffa Road. For more information, call 050- 558-1038.

7 SPIRIT FEST The Osho Israel Festival (named after the Indian guru) returns for its eighth anniversary for a weekend of colorful activities. These include performances by musicians such as Geva Alon, Eran Tzur, Alma Zohar and Asaf Amdurski; parties; workshops for children; and more than 100 sessions of therapy, meditation, movement and dance, nutrition and more. Thursday through Saturday at Givat Haviva.  For tickets and more information: 052-772-0200; www.oshofestival.co.il. KIDS

8 INTERACTIVE SOUNDTRACK Na Ba’ozen , by the Dana Ruttenberg Dance Group, is an interactive and original performance for the whole family held in the Israel Museum’s galleries. The audience sets the soundtrack for each section of the performance – music, texts and more – as dancers respond to the artwork on display and relate to the audience in unexpected ways.Every Tuesday in August at 11:30 a.m. at the Israel Museum, Jerusalem. For tickets and more information, call (02) 670-8935.9 CATCH A SHOOTING STAR The annual Perseid Meteor Shower will be the backdrop for two events. One is at Timna Park; the other is in Mitzpe Ramon. Both offer astronomy workshops for the whole family, night sky watching with large telescopes and an opportunity to observe the meteor shower. Families are invited to sit on mats on the ground as the town lights dim before the dark desert sky sparkles with shooting stars. Wednesday through Saturday (August 15) at Timna Park and Mitzpe Ramon

For more information: Timna Arava Tourism 1-800- 225-007; www.goarava.co.il; Mitzpe Ramon (08) 868-1635; www.negevtour.co.il.10 TUBES COME TO LIFE The Madatech Museum hosts “Tubix,” which the BBC called “one of the most stunning visual performances ever seen.” In this exhibition for the whole family, art, video-art and a dance show come together in a unique, original science display that focuses on tubes and their integral role in the realm of the body, digital information, industry and more.Sunday through Wednesday from 10 a.m. to 6 p.m. and Thursday and Saturday from 10 a.m. to 7 p.m. at the Israel National Mu- seum of Science, Technology and Space (The Madatech) in Haifa. For more information: (04) 681-4444; www.madatech.org.il