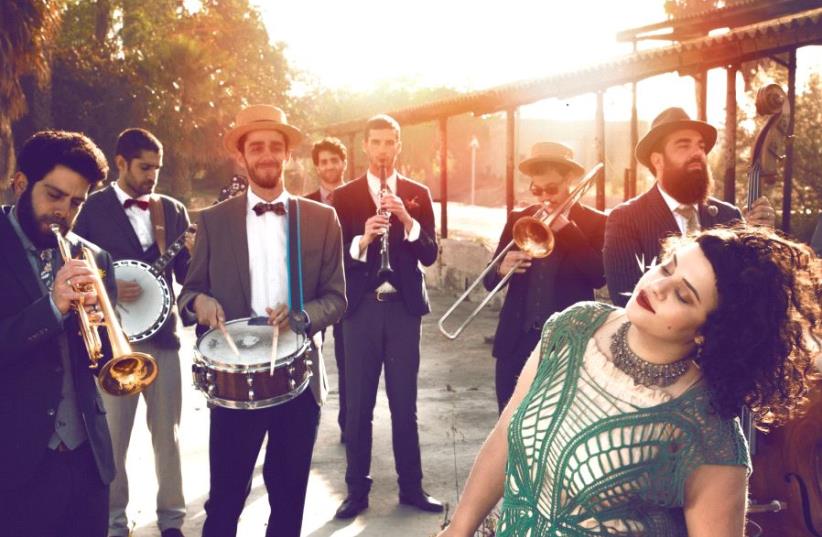 The Betty Bears
(photo credit: DANIELLE COHEN DINAR)
Advertisement
The Betty Bears sound is not simply 1920s jazz. It’s a rollicking romp down New Orleans’ Bourbon Street at midnight. The band, comprised of lead singer Ella Daniel, aka Black Betty, Evyatar Hermesh on double bass, Matan Ben-David on banjo and guitar, Dor Zahavi on piano, Amitai Mann on clarinet, Avior Rokah on trumpet, Bar Tal on trombone and Oded Levi on drums, will release their debut album this month.The self-titled debut comes on the heels of a successful Headstart campaign, where the Betty Bears’ fans donated money to help them release the album independently. The Betty Bears will play at the Yellow Submarine in Jerusalem on June 24. Hermesh and Black Betty sat down with The Jerusalem Post to discuss forming the band, the roots of blues music, and recording live.Where did you both grow up? Hermesh: I grew up in a small kibbutz near Pardes Hana. I got into music when I was 14 and started playing electric bass. When I was 23, I started playing double bass. The next year I met Ella in Jerusalem. She took my place in a rented apartment. I was in my second year and she was just about to begin at [the Jerusalem Academy of Music and Dance]. We hung out that evening and realized that we liked the same music. I told her that we should do something together. The rest is history.Black Betty: I was born in Azerbaijan and came to Israel with my mom when I was two. I grew up in Acre. I started studying music when I was six. I was playing keyboard with my teacher for six years and didn’t make any progress, so I was kind of pissed, but I guess it developed my ear. I started playing again when I was 15, studying the piano. But then I became a hippy and was traveling and couldn’t keep up with the practice. After that, I lived in London for a while and a friend of mine who is a big part of my musical story suggested that I start playing the accordion and call myself Black Betty. So I did. We had a band and we were busking around. Then I started singing. Afterwards I went to the academy, met Evyatar and the Betty Bears were born.So you formed the Betty Bears when you were both still at the Music Academy? BB: Yes, it’s been almost five years now. My boyfriend, Or, is the sound engineer of our EP and of our debut album that’s coming out now. He and I have been together for four years and the Betty Bears are one year older. That’s how I calculate.What is that you love about the jazz of the 1920s? H: What we love about the music is that it’s the very early stages of jazz and we both like jazz. This specific kind of jazz is really happy, communicative and traditional at the same time. It’s almost folk music. It was meant for regular people to hear and dance to and make them happy. Also the combination of the sad and happy aspects of music. This kind of music has a lot of blues in it, which is basically sad, but it’s still swinging, upbeat and lively. As soon as people hear it, they have smiles on their faces. It’s amazing that people under slavery could invent such a happy musical genre, to help cope with the struggles and hardships of life.BB: I think that’s a big part of art and music in general; taking your demons out in a good way. It all started from the blues, everything we know today. The main thing in blues is that the slaves, instead of being violent and killing, they preferred to let it out in the music.How does that relate to the New Orleans style of jazz at that time? H: The style was invented in New Orleans.Jazz pioneers like Jelly Roll Morton and Louis Armstrong came from New Orleans, where brass bands started improvising, and it evolved into jazz.

Did you ever wonder how Israeli audiences would respond to this kind of music? BB: Not really, it wasn’t a decision we made, it just happened. We had a big passion and wanted to do this thing.H: We love the music and wanted to share our experiences with others.What has the response been like to the Betty Bears from Israelis? H: From the very first show we had, we got really good responses from people. We probably wouldn’t have kept going if we hadn’t.BB: We have lots of shows and the crowds always support us. We reached our goal for raising money on the Headstart campaign. It’s jazz, which most people like. But people who don’t like jazz listen to us and find out that it’s jazz later and are surprised because they didn’t know jazz could be so easygoing and fun. It was the pop of the 1920s. We’re also made up of a really talented group of musicians and it works most of the time. Can you talk about your debut album?H: We finished recording and are now at the end of the mixing process.BB: It’s been challenging. Recording it was three days of intense, 12-hour sessions in the studio. We recorded it live. It was special, really something else. Then there are parts that are not as fun as recording, like making sure you got everything right. But we had a very positive and amazing adventure with the illustrator of the album art. There’s a story to the album art. It sounds like it would be easy, but it’s not. I have to have a story and feel it.H: Every stage of the process requires a lot of steps and we’re doing everything ourselves, we don’t have a label or a manager. But we’re looking for a manager.It must be an amazing feeling to be about to release your debut album that your fans helped to put out with your Headstart campaign.H: Yeah it is, we know that the fans want this as much as we do and they’re willing to help to make it happen.For more info on the band visit www.facebook.com/TheBettyBears.