Beauty and the bleak 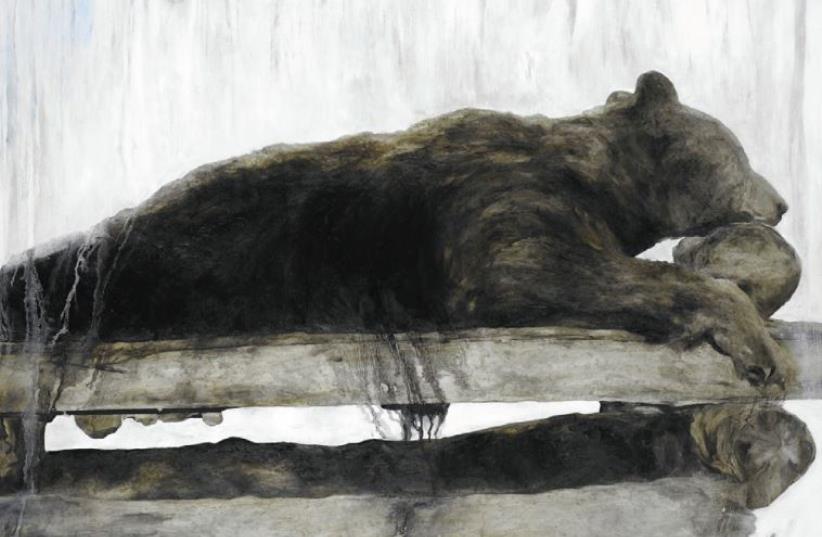 artist Anat Betzer
(photo credit: Courtesy)
Advertisement
Anat Betzer does not paint happy scenes. Her art reveals the beauty in unlikely places, such as desolate landscapes and morbid woods.Originally from Ramat Gan, Anat is as unique among Israeli artists as the scenes found in her paintings. There is pain, loneliness and a remoteness that settles on you like snowfall when viewing her work. Anat’s current exhibit, “Sigma Beams,” will be on display at the Haifa Museum until October 18.When did you first start painting? I’ve been painting since I was a little girl. I have memories of dreaming that I would be an artist when I grew up. Painting and the arts had a big impact on my growth. There was no questions as to what I was going to do; I was always a painter. I served in the army, and afterwards I traveled a bit. Then I went to Midrasha College to study art. I learned there for a few years and then I was living, working, and struggling in London for four years. This was in the ’90s so I saw a lot of good art. After that, I came back to Israel and taught at Midrasha College for 15 years.What motivates you to paint? When I was in kitah bet (2nd grade), we had a very scary art teacher. He used to come into class, put some paper on the table, and then yell “paint!” The boys would usually go and play soccer outside, while the girls would stay inside and paint. One day, I took four pages and put them together to create a big surface for myself. I remember exactly what I painted, and all the decisions I had to make.It was a magical hour for me. I was on another planet. When the hour ended and the teacher came back, it was like being taken out of a dream. I think that ever since then, I’ve just been wanting to get back to that place.

How are you different from other Israeli painters? I think I bring something else [to the table]. Maybe I’m a bit braver.I used to be a sculptor; I’m a very conceptual artist. About 15 years ago, I had a big show at the Herzliya museum, combining furniture and ready-mades. After this show, it was the end of an era for me. I knew I needed to do something drastic. I needed to change my set of tools. It was then that I started to paint again. In order to save myself, I made a huge change. I felt I had to go as far as I could from what I was doing because it wasn’t my language. I had become very articulate at speaking other people’s language, but it wasn’t my own. I wasn’t feeling at the time that I was doing something unusual or brave, I just knew that I had to do it. People looked at me like I was crazy with all these views and landscapes.

Your paintings have a somewhat melancholy feel to them.Can you expound on that? I paint in black and white, basically.I put some colors every once in a while, but the way I paint the images is mostly black and white.I think that has something to do with it. I’m influenced by photography heavily. I take images from books or from the Internet, so I’m using photographs for my own purpose. For me, the landscapes and the places that I paint are exotic. I’ve never been to forests full of snow, so it’s exotic for me, like the camels of Israel are exotic for Europeans. All I know about it is from literature and from movies.I think that culture describes it in a melancholy or morbid way. We all share the stories and the memories about the Holocaust, so it’s there somehow in our collective memory.

What does your art sound like? That’s a good question because music is very important to my art.Sometimes I take phrases from songs, and some of my exhibitions have been totally influenced by music. My last show in Tel Aviv was completely focused around one album: Beth Gibbons’ Show. She is amazing. If my work sounded like anyone in general, I hope it would be PJ Harvey or Nick Cave. I think in the end though, my work is quiet.

Can you talk about your current exhibition at the Haifa Museum? It’s a new exhibition, but it’s really a retrospective. Some of the work, I’ve never shown in Israel, and some I’ve never shown at all. Most of it will be completely new for the Israeli audience. It’s a chance for people to see what I’ve been doing for the past 10 years.I’m quite a busy artist. I work a lot.Every piece takes time, but I do several paintings at the same time.So every two or three years, I have enough for a new exhibition. There are about 14 pieces in this show. We were very discerning with which works we chose.What was the process like of choosing pieces for this exhibition? They called me and asked if I was interested in having a show, and of course I was. So I sat down with all my work and chose pieces that would be like a mini-retrospective; a moment in time.

What is the meaning behind the title ‘Sigma Beams’? In Hebrew we say barzel sigma.We didn’t know exactly how to translate it. When you are building something like a bridge or a house, you put concrete in the foundation and then you add the iron beams because it’s flexible and strong. It’s a metaphor for what we need. Our foundation as a nation needs this flexibility, otherwise we will break.