By HANNAH BROWN / FROM THE BERLIN FILM FESTIVAL 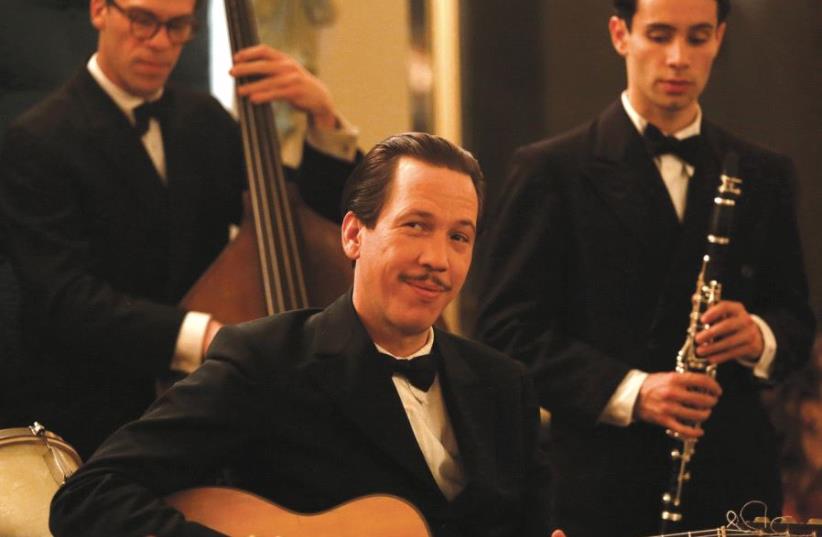 REDA KATEB (center) stars as the title character in Etienne Comar’s ‘Django’
(photo credit: ROGER ARPAJOU)
Advertisement
The movie that opens a film festival can set the tone for the entire event, and this year, the 67th Berlinale (the Berlin International Film Festival) began with Etienne Comar’s Django, a film that combines great jazz music with a gripping, little-known chapter in World War II.Django Reinhardt, who grew up in France, was considered the greatest jazz guitarist of all time and the creator of the Gypsie swing musical genre. He was also a composer, and after the war toured the US with Duke Ellington. But in spite of his fame and musical accomplishments, he was of Roma (Gypsie) descent, and faced Nazi persecution. The movie opens in 1943, when the Germans became even more brutal toward the Romani. Approximately half a million Roma were murdered by the Nazis since, like Jews, they were considered enemies of the Third Reich.Reinhardt, because of his talent and fame, was in an unusual position, and for a time, his family was left alone, even though the Germans and their French counterparts ruled France. But his high profile eventually got him into trouble, as the Nazis decided to exploit his gifts. They asked him to come to Germany and perform for propaganda minister Joseph Goebbels. Although the rakish Reinhardt, brilliantly played by Reda Kateb, was basically apolitical, he knew Roma were being rounded up and sent to concentration camps. He hated the Nazis and feared for his and his bandmates’ safety in Germany. Eventually, he tried to go into hiding and cross the border into Switzerland.At times he did play concerts for the Nazis, but the Germans considered jazz a degenerate art form, one that could only be tolerated in small doses and which was innately anti-Hitler. In a bizarre scene, a Nazi officer commands Reinhardt and his group to play with “no more than five percent syncopation” in a performance. But when he disobeys – to create a distraction so that some others can cross into Switzerland – and plays the jazz he loves, even the Nazis get up and dance.The movie is an interesting look at the intersection between great art and resistance to fascism. It also spotlights the Gypsies (officially they are now called the Sinti and Roma people) and the arc of their persecution during the war.Reinhardt is an interesting figure, not conventionally likable or heroic, and more concerned – most of the time – about his music than about his family or his people. But likable or not, this portrayal rings true. Eventually, after he makes it to safety, he writes a mournful classical piece as a memorial to the murdered Gypsies, which is performed in the movie.Django is filled with music but it’s also a gripping drama, laced with humor, and shows the complex ways in which people respond to persecution and danger. The movie, which I hope will find an Israeli distributor, shows the consequences of demonizing an entire group and the power of music as a form of rebellion.