Best movies of the year, and ‘Lies’ at the Emmys

On September 19 you can watch Israel’s movie awards, the Ophir Awards, live on Channel 10. 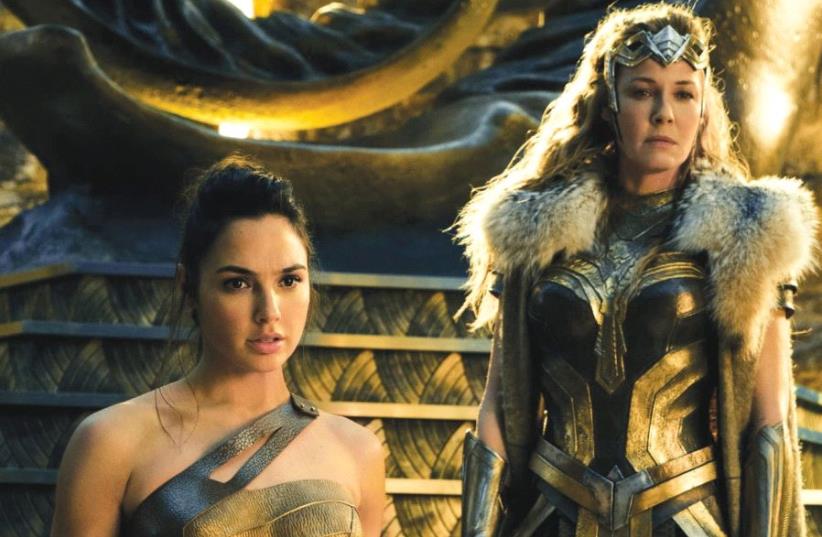 GAL GADOT (left) and Connie Nielsen in a scene from ‘Wonder Woman.’
(photo credit: DC COMICS)
Advertisement
The Emmys are coming up on September 17 in the US and September 18 here, and you can watch them live on YES Oh at 3 a.m. or at 8 p.m. There are so many categories and the Emmy voters are less predictable than the Oscars, but the buzz is that This Is Us will do well, winning Best Drama over the darker The Leftovers, and that Sterling K. Brown will win Best Actor in a Drama. Elisabeth Moss is the favorite to win Best Actress for dystopian The Handmaid’s Tale. Even though Veep has won many times, it seems possible that the comedy series and its star Julia Louis-Dreyfus will win again.Big screen stars Nicole Kidman and Robert De Niro are the favorites to win acting Emmys for a limited series, for their roles in Big Little Lies (which will likely win Best Limited Series) and The Wizard of Lies. The Lies will have it this year, it seems.On September 19 you can watch Israel’s movie awards, the Ophir Awards, live on Channel 10.If you’re the last person in Israel who hasn’t seen Wonder Woman yet — or if you want to see it again — you can catch it on television on HOT VOD Movies starting on September 18.It was one of the most popular movies of the year, and many audiences warmed to the film because it featured a superheroine rather than a superhero. For comicbook fans, it was a hotly anticipated big-screen version of one of the most beloved comics of all time. Feminists applauded the fact that it had a female director, Patty Jenkins. They also enjoyed the female-centric Wonder Woman origin story, where Diana (aka Wonder Woman) is raised to lead the Amazons on a mythical island paradise.And then there’s the movie’s greatest special effect: Gal Gadot. She’s toned and strong, both feminine and authoritative, with a face that the camera loves. Oh, and by the way, she’s from Rosh Ha’ayin. Even the most highbrow Israelis couldn’t keep away from the multiplex when the film opened. Gadot has been in other action flicks and comedies, but prior to Wonder Woman, audiences here knew her best from the comedy film Kicking Out Shoshana and her role in the TV drama Kathmandu. I thought she was especially good in the latter series as a woman searching for her sister.On September 22 at 10 p.m., YES 4 will air Keeping Up with the Joneses, in which Gadot and John Hamm play a super spy couple, and this gorgeous duo shake things up when they go undercover in the suburbs.Those who enjoyed Wonder Woman will want to check out Greenhouse Academy, the Netflix version of the Israeli series Hahamama. I got to see this English-language version when Netflix released all its first-season episodes on September 8. It’s an intelligent and suspenseful teen drama, with a lively cast headed by Israeli-American actress Ariel Mortman and Finn Roberts. They play a brother and sister who enroll in the elite beachfront school to honor the memory of their mother, an astronaut who died on a space flight.Fans of the original Melrose Place will recognize Parker Stevenson – who played the geek entrepreneur who romanced Allison – as the idealistic but tough principal.If you’re looking for more adult fare, there are a few options. You might want to try The Carer, which stars Brian Cox as a celebrated Shakespearean actor struggling with age and infirmity, who bonds with his young, foreign caregiver (Coco Konig). The Carer was directed by Hungarian-born, Tel Aviv-based János Edelényi. It’s showing on HOT VOD Movies starting on September 20.Manchester by the Sea, the very moving story of a man who has gone through a tragedy and is forced to pick up the pieces of his life years later, will air on YES 3 on September 15 at 10 p.m. Casey Affleck won a Best Actor Oscar, and writer/director Kenneth Lonergan won Best Original Screenplay. I would have chosen this film for Best Picture, and Michelle Williams, who plays Affleck’s ex, for Best Supporting Actress as well.