Bezalel Hotel: Boutique chic in the heart of Jerusalem

The latest fixture in the Atlas Hotel collection boasts of elegant comfort in the center of the "Eternal City." 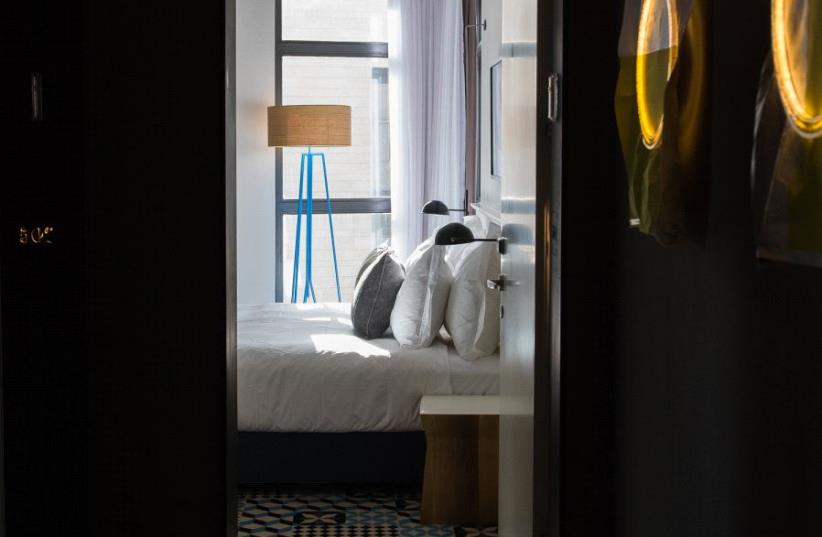 The Bezalel Hotel in Jerusalem
(photo credit: SIVAN ASKAYO)
Advertisement
The elegance of Jerusalem, the eccentricity of the iconic Mahane Yehuda Market and the sophistication of first rate hotels come together at the capital's new Bezalel Hotel.Opened in late December, the latest of the Atlas Hotel collection's 15 fixtures boasts of boutique elegance in the heart of the "Eternal City."Conveniently situated in Jerusalem's quaint Nachlaot neighborhood, the chic, 37-room hotel is housed in a restored, low-rise limestone building. The entire structure is complete with meticulously-detailed decor dedicated entirely to Israeli artists and designers.An unassuming private entrance gate reflects the discreet exclusivity that is espoused in the hotel's charming ambiance.Walk through a flora-filled semi-enclosed courtyard lounge, and arrive at the intimate reception area where guests are immediately embraced by a welcoming staff and comfortable contemporary furnishing.Along with the soft, warm, citrus scent that pervades throughout the hotel guests, and pets, are personally welcomed by an eagerly accommodating staff. An assortment custom chocolates and coffees are available in the lobby along with a computer station, full umbrella stand, and cozy sitting corner with a stocked bookcase. Hand-crafted Armenian ceramics line multiple wall expanses in the public areas. Photo credit: Sivan AskayoThe urban haven highlights an upscale twist on the Israeli ‘shuk style’ with a design scheme reflecting an eclectic mix of materials, colors, scents and sounds found in the Mahane Yehuda Market located a mere couple blocks away.Blue-and-white motifs along with juxtaposing black and white/grayscale colors are also found in the dining room as well as the rest of the hotel. The intimate dining room - where breakfast and happy hour are served daily - exudes the feeling of an upscale library lounge-meets-modern, Mediterranean salon. Photo credit: Sivan AskayoAccording to managing staff, Bezalel sought to serve as an upgraded extension of the flavors, scents and colors of the nearby market along with Jerusalem icons such as the hotel’s namesake Bezalel Academy of Art and Design, Israel’s oldest institution of higher education.  Traveling in the single elevator upstairs to the rooms, the soothing color scheme continues in the corridors with quirky color bursts combined with bold modern architectural touches. The hotel also has two ground-floor rooms customized for guests who observe Shabbat.Opening the solid, dark door to the hotel room and the guest is pleasantly met with clean, uniquely decorated interior complete with modern amenities including, a flat-screen TV, king-sized bed, half-a-dozen plush pillows, floor-to-ceiling window and black-out drapes. Photo credit: Sivan AskayoThe colorful, geometric carpet, spot lighting and combination of wicker, black wood and blue accents combine to give the feel of a classy upgrade to Greek Isles-inspired decor. The relatively small bathroom is complete with cosmetic amenities along with a bath/shower setup to suit the likes of all bathers. While the size of the room is definitely boutique, the standard is up to par for even the most worldly of travelers. Visitor will enjoy a pleasant night’s sleep with the thick-pane windows blocking out noise but providing breathtaking views of the city. While the majority of rooms are similarly sized, options exists for conjoining rooms and there are five rooms available with private outside balconies. While waking up is no easy task given the comfort of the rooms, the exquisite breakfast display served from 7-10 a.m. is well worth the effort. The display includes a varied breakfast buffet with gourmet cheeses, fresh vegetables, dry cereals and fruits, salads and Israeli classics such as shakshuka and quiche. Along with custom omelettes, the dishes by Chef Kinoyo exude a top-quality spin on the classic Israeli breakfast concept infused with Japanese and French touches. Possibly the most extravagant part of the meal is the dessert display. An oozing sheet of buttery honeycomb accompanies the likes of melt-in-your-mouth vanilla bean crème brûlée, halva and assorted pastries represent the variety of cultural influences found in the melting-pot that is Israel and Jerusalem.While the hotel does not house amenities such as a gym or spa, the intoxicating ambiance and friendly, accommodating staff - the likes of which are almost mythical in a country known to have poor customer service by Western standards - makes it difficult to leave even to explore the nearby cultural treasures.  However, Bezalel is ideal for the on-the-go guest seeking a stylish stay in the heart of Jerusalem.

The writer was a guest of the hotel.
1 Mesilat Hayesharim, Jerusalem
Nightly fares vary on average from NIS 600-1,000