Algerian-born Jerusalemite poet Erez Biton hopes his love of the Hebrew language will shine through at the annual Poetry Festival in Metulla. 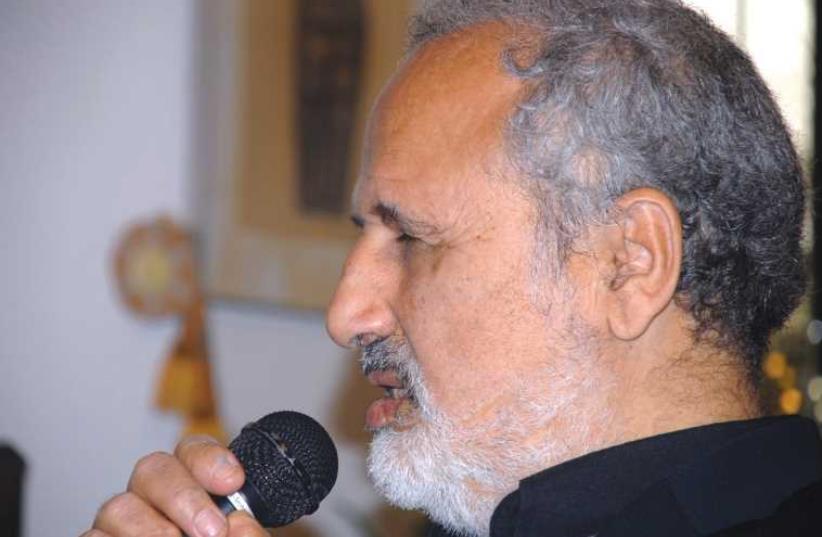 ‘I AM used to encountering myself in the most direct manner, and I eke out poetic crystallization from this,’ says veteran Israeli poet Erez Biton
(photo credit: RACHEL CALAHORRA BITTON)
Advertisement
The 18th annual Poets Festival will take place this weekend, under the auspices of the Jerusalem-based Confederation House, at its traditional venue of Metulla. This year’s program is based in the theme of sorcery, which references the poem of the same name – “Kishufim” in Hebrew – by Dalia Ravikovitch, who passed away 10 years ago. The three-day lineup (May 22-24) features tributes to various poets, including Ravikovitch and 84-year-old Nathan Zach, as well as an intriguing slot called To Sprout a Voice in Cotton Wool: Poetry and Revolution. The session will look at how various groups in society – Sephardi, Ashkenazi, women and the religious – are represented in Hebrew poetry.Erez Biton has been doing his best to represent the Sephardi side of Israeli society for many a year. The 72-year-old Algerian-born Jerusalemite poet, who is of Moroccan descent, will feature in one of the musical items on the festival agenda, reading some of his work to the accompaniment of guitarist Yakir Ben-Moshe and sitar player Yotam Haimovitch.Biton has been a mainstay of the Israeli poetry community for around half a century and has won kudos from critics and readers alike. Poet and literary critic Eli Hirsh is an avowed admirer of Biton, calling him “the dominant figure in the creation and development of a new and major tradition in the history of Hebrew poetry – the tradition of Israeli Mizrahi poetry.” Last month Biton added the Israel Prize for Hebrew Literature and Poetry to his already bulging awards portfolio.Hirsh feels that Biton’s contribution to Israeli poetry and, in particular, to improving the status of writers from the eastern side of the country’s demographic landscape, cannot be overestimated.“When Biton first emerged as a poet, in the Sixties and Seventies, he introduced materials that, at the time, were deemed marginal or unworthy by the literary establishment,” Hirsh notes. “In fact, the tendency was to suppress and eradicate such materials as too ‘folkloristic,’ ‘too Moroccan,’ too ‘oriental,’ but thanks to his great artistry, creating sharp and exact poems and redefining the direction of Hebrew poetry, such materials have since taken root in the contemporary scene as a matter of course. One is hard-pressed to name another Israeli poet who can claim such an achievement.”Indeed, Biton addresses a wide spectrum of topics, including visual impairment. He lost his eyesight at the age of 10 after finding a stray grenade, and later qualified as a social worker and psychologist. Biton has never shirked from sensitive or challenging topics, including confronting his own psyche and emotions.“I am used to encountering myself in the most direct manner, and I eke out poetic crystallization from this,” he declares.The issue of visual impairment appears frequently in Biton’s oeuvre.“How many great blind people have there been?” he muses. “[Argentinean writer Jorge Luis] Borges was not a classic blind person because he could see for most of his life.” (Borges lost all his vision at the age of 55.) “I know there is a blind poet in English poetry called Milton [referring to the celebrated 17th century author of Paradise Lost John Milton]. I haven’t read Milton yet.”Biton explains the omission due to his desire to hold on to his originality.“I haven’t read him yet because I don’t want to lose my unique form of expression regarding my personal tangible encounter with my own blindness.”When Biton first lost his vision there were no Braille poetry books available, and he found others ways of imbibing, producing and hoarding literary works.“Since my youth poetry, for me, became like molten lava,” he states. “I lived the words which effervesced inside me for days on end. I would walk around for whole days with mine and others’ texts but, because of my inability to access poetry books, I would feed off the crumbs of poetic material which reached me from the radio, or from other places.”Over the years, Biton has managed to find all kinds of original ways of experiencing things which, normally, one would have to see in order to ingest and appreciate. Some years ago he went with the late iconic poet Yehuda Amichai to the Judean Desert. Instead of asking Amichai to describe the sandy expanses to him, Biton simply held Amichai’s hand and sensed his professional colleague’s impressions of the desert. Both subsequently produced a poem about the experience which bear a remarkable resemblance, Biton’s visual obstacle notwithstanding.Biton memorized the works of many of our leading writers, including Bialik, Alterman, Amichai and Ravikovitch. He says that it is this intimate knowledge of the poets’ works which enabled him to set himself and find his own voice and style.“I can talk, in great depth, about all these poets and...possibly as a result of this I was able to build a fence around, and insulate, my work and all this poetry and to develop my own poetic stance.”The latter ability also develops with maturity.“As a youth I wrote love poems of a youth looking for his way to the world of poems which were defined as universal, existential and devoid of time and place. I later became completely concrete, and I could set myself apart from the others.”Biton’s musical encounter with Ben-Moshe and Haimovitch in Metulla is part of the Poets Play Music show which also features festival artistic director, and poet and pianist Uri Hollander, while TV personality Kobi Medan will read excerpts from literature professor Uri Bernstein’s book Poems for a Single Piano to the accompaniment of a jazz band offering singular renditions of Leonard Cohen songs.Other prominent musical items at the festival includes veteran violinist and oud player Yair Dallal’s VeAhavta concert, which is based on a blend of ancient Jewish texts contemporary Hebrew poetry, and Rona Kenan’s acoustic show Hakol Shekoreh Lee (The Voice That Calls Me).

The majority of the Poets Festival events are free. For tickets: (04) 837-7777 and www.barak-tickets.co.il. For more information: www.confederationhouse.org.