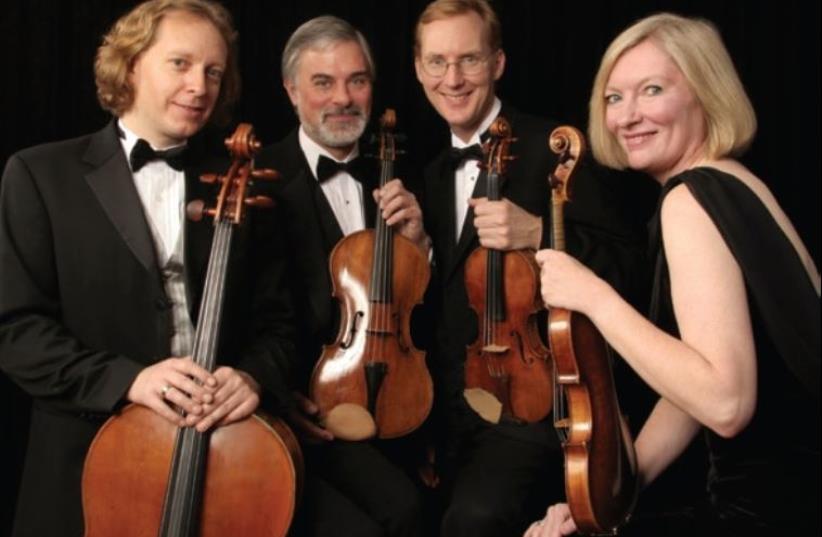 The American String Quartet
(photo credit: PR)
Advertisement
The acclaimed American String Quartet is coming to Tel Aviv for a Brahms and Mendelssohn Marathon between June 15 and 25.The concerts will take place at Recanati Hall of the Tel Aviv Museum of Art as a part of the museum’s music programs. An additional concert will be performed on June 24 at Kibbutz Naan. The June 15 and June 24 concerts will be preceded by a lecture.The program features quartets and quintets by Brahms and Mendelssohn.To perform the quintets, Israeli violist Tali Kravitz will join the renowned chamber ensemble. On June 21, Israeli cellist Iris Regev will join the quartet for a program featuring Bach’s The Art of Fugue and Schubert’s Quintet in C Major. This concert will be performed in the intimate atmosphere of one of the museum’s galleries.The American String Quartet is comprised of violinists Peter Winograd and Laurie Carney, violist Daniel Avshalomov and cellist Wolfram Koessel. Formed in 1974, the quartet has performed in all 50 US states and has appeared in every important concert hall in the world. It has been the resident quartet at the Aspen Music Festival, the Manhattan School of Music, the Taos School of Music, the Peabody Conservatory and the Van Cliburn International Piano Competition.The quartet’s diverse activities have also included numerous international radio and television broadcasts, an extensive discography, tours of Asia and performances with the New York City Ballet, the Montreal Symphony and the Philadelphia Orchestra.These will be last concerts of the 2014-2015 season of the museum’s successful music series, which has won the trust of Tel Aviv music lovers by the high level of the performance and quality programs. And it presents a rare opportunity to meet leading young artists who have not yet performed in Israel or rarely appear on our shores.Ilan Rechtman is the artistic director of music programs. Several years ago he decided to put his career as a pianist and composer on hold for a while in order to turn the Tel Aviv Museum of Art into an important classical music venue.In regard to the new 2015-2016 season, he says, “We are bringing back some of the audience’s favorite musicians from Europe and the US to perform some of chamber music’s most well-known pieces. We are continuing all our series and Israeli Camerata Jerusalem this year, which will serve as the basis for our La Tempesta dei Solisti series. The program is full of popular pieces, such as Brahms’s Piano Concerto No. 1, with German pianist Katharina Treutler, who is a rising star in Europe.”He continues, “We bring the best soloists possible, such as cellists Gary Hoffman, who will perform Elgar’s cello concerto and Brahms’s double concerto with violinist Arnaud Sussmann. I believe that Gary Hoffman, as well as our guest Raphael Wallfisch, is among the world’s leading cellists. An important American violinist, Marc Kaplan, will make his Israeli debut as a soloist and member of the Weiss, Kaplan Stompf Trio. The Signature Series features the best chamber music of the greatest composers, performed by outstanding international stars.Among the highlights are the Jerusalem Quartet playing the complete cycle of Bartok’s string Quartets; the Weiss, Kaplan Stompf Trio performing Beethoven’s piano trios; the long-awaited comeback of the Ariel Quartet; and a concert of the Casals Festival Artists.”For more information: www.tamuseum.org.il. For reservations: (03) 607-7070 (Tel Aviv); 052-223-2556 (Kibbutz Naan)