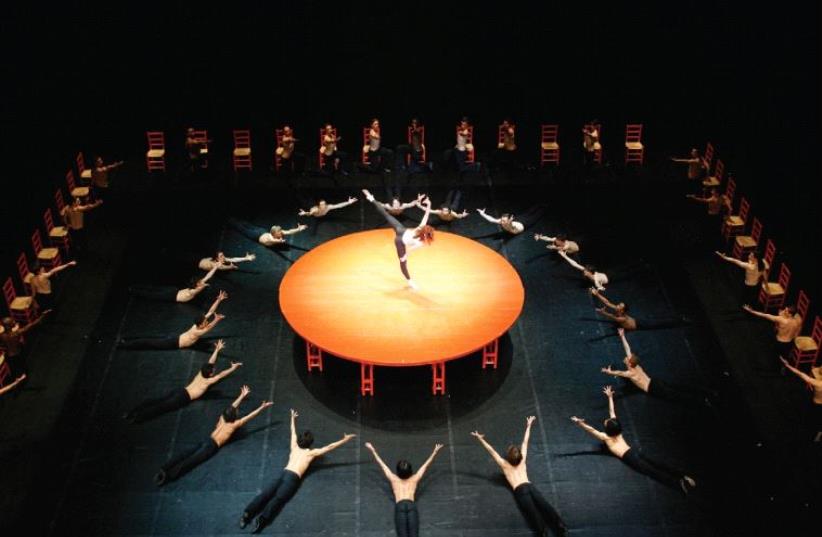 Béjart Ballet Lausanne
(photo credit: ILLIA CHKOLNIK)
Advertisement
For more than a generation of dancers, French choreographer Maurice Béjart symbolized the epitome of greatness. To be taken into his fold meant a stamp of approval the likes of which were virtually nonexistent in other circles. During his illustrious career, Béjart touched the lives of countless artists, churning out, through his company, some of the world’s brightest and most alluring dancers and choreographers.Like thousands of dancers, Gil Roman met Maurice Béjart during an audition. As he was already a renowned international artist, his auditions were highly anticipated by the dance community.“My first memory of Maurice is from 1979,” Roman recalls. “It was at the Palais des Sports in Paris, and I was auditioning for the company. I was in front of him for the first time. It was a huge physical impact. His eyes made a deep and internal impression on me.”Shortly following their first meeting, Béjart invited Roman to join Le Ballet du XXe Siècle, where he would spend the coming three decades as a key performer and artistic associate. In 2007, when Béjart passed away, Roman took over the reins of the company, vowing to preserve Béjart’s legacy.This month, Béjart Ballet Lausanne will perform in Israel after a long absence. Much has changed since we last saw the company, yet the fiber of the longstanding troupe remains true to its roots.“Today, the company stands on two fundamental pillars: preserving and promoting Maurice Béjart work and remaining a space and a tool for creation. My goals are to do credit to this legacy and to create every year for my dancers. Our activities change and evolve. Once, Maurice Béjart was the only creator. Today, I can invite choreographers or bring my own creations. Besides, for the new dancers of the company, Maurice Béjart’s work is still to be discovered, reinterpreted,” explains Roman.In Israel, Béjart Ballet Lausanne will present two programs. As an invaluable figure in Béjart’s company, Roman has intimate knowledge of every one of the creations that will be presented here. For him, there is no favorite, no best or worst ballet.“They all represent an essential moment, a stepping-stone on the path,” he says.Putting together the tour program allowed Roman a moment to reflect on the repertoire at hand and the goals of the company today.“I chose from various things like the pieces that the company is working on at the moment or my dancers’ qualities. Of course, I also thought of the last ballets performed by the company in Israel,” Roman says.The first program features Béjart’s seminal work, Ballet for Life. Premiered in 1997 at the Theatre National de Chaillot, the work featured a cast of 37 dancers.In the nearly 20 years since that first performance, Ballet for Life has been shown more than 350 times in dozens of cities around the globe.“The piece is set to music by Queen and Mozart, with costumes by Gianni Versace,” says Roman.“It is a tribute to Freddie Mercury and Jorge Donn.”The second program is a mixed evening featuring three short works by Béjart, as well as one of Roman’s creations. Piaf, Bhakti III and Bolero all represent important moments in Béjart’s creative arc.Piaf is the newest of the works, having premiered in Tokyo in 1988. Bhakti III, which was created in 1968, was Béjart’s glance at far Eastern culture and employs Indian music and costumes.Bolero, arguably Béjart’s most famous work, premiered in 1961, is danced to Ravel’s opus and is an utterly unforgettable ballet.“To this, I add Anima Blues, a personal creation from 2013. This mix shows an overview of what the company is today,” explains Roman.Béjart Ballet Lausanne will perform on October 4, 5, 7 and 8 at the Opera House in Tel Aviv. For more information, visit www.israelopera.co.il.