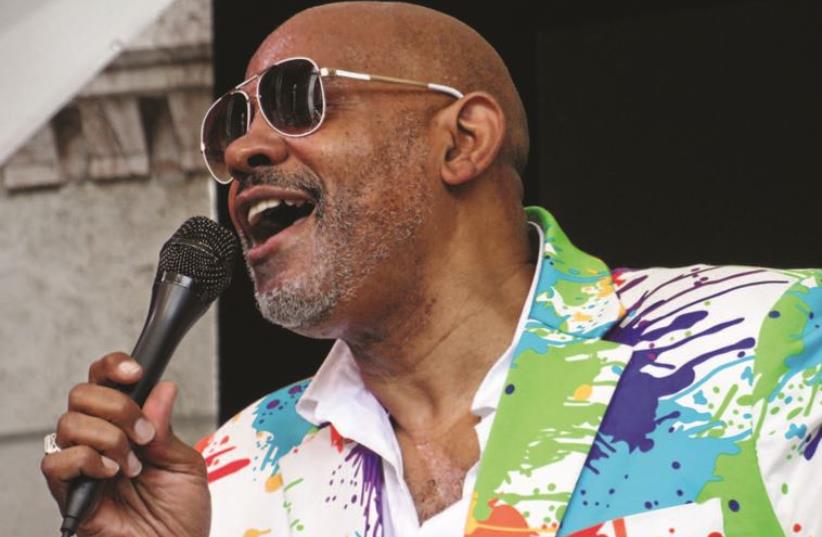 Allan Harris.
(photo credit: COURTESY OF UMBIRA JAZZ)
Advertisement
When the name Nat King Cole comes up, the immediate association tends towards the velvety, silky side of vocal endeavor.Allan Harris has no problem with being compared with the late great singer.Harris is no slouch himself in the jazz singing department, as will be evident when he performs between February 27 and March 5 as part of this year’s Hot Jazz series in a program that incorporates a tribute to Cole.The 59-year-old New Yorker is also a dab hand at the guitar and says the instrument became an important part of his life before the singing kicked in.He also had a fertile musical domestic environment.“The guitar came first, although there was a lot of singing in my house,” he recalls. “I always sang at home, and there were a couple of musicians there.”The latter included Harris’s aunt, who was an opera singer, and his mother, who gave him piano lessons.“My aunt gave me a guitar, and my mother was from the old classical school. She was strict, and I had to practice three hours a day,” he recalls.The guitar offered some welcome relief from the keyboard discipline regime, and Harris’s mother was none too pleased by the appearance of the new instrument.“My mother said, ‘Don’t give that boy a guitar,’ and she kept it hidden from me for three months,” laughs Harris. “My mother was a very strong practitioner, and she was quite rigid. But having a guitar helped me find myself a little better.”Mind you, it’s not as if the youngster had dreams of becoming a rock and roll guitarist.“I was just having fun with it, and I could express myself on it,” he says.And there was plenty of inspiration to be had at the time.“I grew up in the rock era, in the late 1960s, when folk rock was coming in, and there was r&b and funk music. So it was pretty cool to play the guitar then,” he says.There were social interaction benefits to be had as well.“If you played the guitar you got a lot of attention, like most young men want. Let’s not forget about the girls, too,” he chuckles.While Harris was working on his guitar riffs and flexing his vocal chords, he was keeping one ear trained on all manner of sounds that were around at the time.“I got a bit of everything,” he says.“I listened to Johnny Cash, Led Zeppelin, Miles Davis, Herbie Hancock. Being with my mother and my aunt and living in New York, they exposed me to so much jazz. We used to go to the Apollo [Theater in Harlem] on a Sunday. They used to let kids in for free.”The youngster got spiritual and corporeal nutrition.“My other aunt had a soul food restaurant down the street from the Apollo, so I’d go down there and eat and watch some of the stars getting their food there between the matinee shows,” he recounts.Harris imbibed a rich diet of sounds at home, too.“It was just music and music, on the radio as well – everything from Nat King Cole to Ray Charles and Charley Pride and Doris Day. Whoever was in the house picked what they wanted to hear,” he says.Young Harris lapped it all up with relish.Cole was an early and formative influence of Harris’s musical evolution.“He had his own TV variety special,” recalls Harris. “On that show he would bring on everybody, from Harry Belafonte to Peggy Lee. It was just a wonderful event when the whole family would sit down together every week.”It was about more than the music.“This was the time of segregation [between blacks and whites], and Nat King Cole sang songs and had people from all walks of life come on his show. That was really something. It really changed my life,” he says.Harris may have been into music big time, but he still wasn’t thinking about making a career out of it.“I went to college to study animal husbandry and biology,” he says. “I don’t know why. Maybe it was because I’ve always loved animals. I’ve been riding horses since I was four years old. My father has 200 acres of land in Pennsylvania, and I go there when I can to go horseback riding.”It also gets Harris away from the urban pollution of New York City and out into healthy fresh air.“That’s so important,” Harris notes. “Tony Bennett told me it’s important to sleep well and get rest, no matter how much talent you have. And look at him, he’s 90 and still pitch perfect.”It when he was a student doing a campus gig that Harris finally discovered his true calling.“I was singing and playing with a bunch of guys, and there was a bucket for people to put cash in, and I looked in it and it was full of dollars! I thought, ‘Man, I’m doing something I love and getting paid for it. That’s what I want to do.’” In the interim, Harris has been honing his instrumental and vocal skills, gaining rave reviews and having his vocal delivery likened to that of Cole.“I could think of worse people to be compared to,” he laughs. “It is such an honor to me. I pinch myself every time I get on a stage and sing some of his material. I feel I am paying my respects to him and how he delivered a song.”Harris will have plenty of help with the delivery for his gigs at Mercaz Habama in Ganei Tikva in Tel Aviv (February 27, 9 p.m.); Zappa Herzliya (March 1, doors open 8:15 p.m., show starts 10 p.m.); Modi’in (Einan Hall, March 2, 9 p.m.); Tel Aviv Museum of Art (March 3 and 4, 9 p.m. and 9:30 p.m., respectively); Haifa (Abba Hushi House, March 5, 9 p.m.); and a children’s show at the Tel Aviv Museum of Art at 11 a.m. on March 5. Harris’s sidemen for the occasion include US saxophonist Jesse Jones Jr. and an Israeli threesome of pianist Alec Katz, bassist Assaf Hakimi and drummer Yonatan Rosen.

For tickets and more information: (03) 573-3001 and www.hotjazz.co.il
Advertisement
Subscribe for our daily newsletter